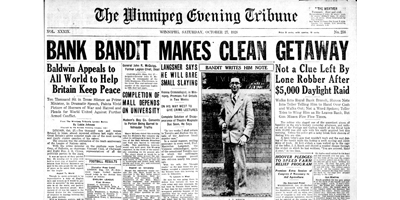 The silent bandit — robber hands teller note and gets away with $5,000 of Royal Bank’s cash

No sound of the firing mechanism igniting an explosive charge in the pistol barrel.

Five times teller John J. Resch pulled the trigger on his revolver, which was aimed at the back of the man who had just robbed the Royal Bank branch at the corner of Portage Avenue and Carlton Street in Winnipeg, and five times his revolver failed to fire. Presumably, it was a five-shot revolver and not a six-shooter.

Meanwhile, the bandit sauntered out of the branch and onto the street, making good his getaway with $5,000 of the bank’s cash. It was a “daring daylight” robbery that gained front-page coverage in both of Winnipeg’s daily newspapers as well being reported in national papers.

The robbery began about three minutes before the bank was about to close at 3 p.m., when a gun-wielding bandit entered the Royal Bank branch on October 26, 1928.

“Immediately upon entering the bank the bandit walked up to the teller’s cage in which John Resch, the teller of 559 Mountain street, was busy counting money,” reported the October 27 Winnipeg Free Press. “The bandit had an overcoat over his left arm and carried a small bag and parcel. He presented a counter cheque which had been made out before entering the premises.”

Resch read what was written on the cheque: “You are covered. Hand it over”

Resch’s face turned white and he wanted to shout out, “Help!” but stopped when he was shown “a gleaming nickel-plated revolver,” partially hidden in the bank robber’s coat and pointed at him.

“Resch immediately handed $5,000 in cash over to the lone bandit. This was made up in two distinct bundles, one containing 200 ten-dollar bills, and the other 400 five-dollar bills.”

There must of been other bills taken as the total bills mentioned in the above account only adds up to $4,000, but all reports were clear that the robber received $5,000 in cash from Resch. The Tribune said the bandit got away with $5,000 in $5 and $10 bills without mentioning specific piles of each denomination.

“The bandit scooped both bundles up in his hands, stored them in his overcoat, and hurried out of the bank,” continued the Free Press report.

It was while the robber was purposefully heading to the door leading to Portage Avenue that Resch grabbed “his teller’s revolver,” pointing it at the bandit’s back.

The five clicks without discharges were the result of the wrong rounds being put into what was described as “an ancient revolver.” Instead of the required centre-fire cartridges, rim-fire cartridges had been inserted into the firearm.

“The harmless clicks of the bank gun had some result, however,” reported the Winnipeg Tribune a day after the robbery. “They attracted the attention of W.R. Scott, 803 Corydon ave., who was working in the next cage. Scott shouted ‘Hold up!’ and Resch too! The two ran from their cages toward the door but the delay had given the bandit a chance for a clear getaway.”

When the tellers glanced up and down Portage Avenue, all they saw was the usual afternoon crowd passing by where the street met Carlton.

“Who in all those hundreds of people was the bandit?” Resch later commented. “They all looked alike.”

The first theory offered by the police was that the bandit had made his getaway in a waiting car, but that was dropped in favour of the man nonchalantly walking away from the scene of the robbery, proceeding down Carlton and then vanishing.

The chase to catch the thief was further complicated by the fact that the police initially went to the wrong bank (Free Press).

“The first alarm told police the holdup was at the (Royal Bank branch) corner of Portage and Sherbrook,” according to the Tribune report. “Motorcycle policemen went up Portage like clattering comets. When they got to Sherbrook they tried to find a holdup, but none was being staged there. Policemen were as much in the dark about the thing as were the curious crowd that gathered.”

They soon were given the right location over the radio and went to Carlton, but it was too late — the robbery was at least 15 minutes old, the cash was gone and the bandit’s trail was cold.

There had been several people in the bank when the robbery took place, but no one could provide the police with accurate information about the direction that the bandit took when he hit the street. The tellers were no help because the bank’s two rows of entrance doors created a vestibule, and the street door was not visible from the tellers’ cages.

Among the other people present, none had any idea that a robbery was taking place.

Mrs. Sam Wasserman, 212 Cambridge St., had actually rubbed shoulders with the bandit while the robbery was in progress.

“She was waiting for her turn at the (same) teller’s wicket while the robber’s gun was ready for action under his coat,” reported the Tribune.

She didn’t know anything was afoot until she saw Resch waving his revolver in the air.

“I didn’t know what was the matter, but I could see the teller was very white and shaky,” she said. “When the man (bandit) had gone he (Resch) said something about his gun not working and ran out his cage to give the alarm.”

Another bank customer, Fred Stinson, 526 Simcoe St., said he didn’t know about the robbery until he left the bank. He was actually only a few steps behind the bandit while exiting the branch. If Resch’s revolver had fired, the bullets would have whizzed past his ear while headed towards the bandit’s back.

Stinson told the Free Press that he was “there all the time, but I never for a moment thought that anything was wrong. Why, I followed the bandit from the bank. Honest, I can’t understand it myself.”

There was no reason for the customers in the bank to realize a heist was in progress, as the man had not uttered a single word, earning him the nickname the “silent bandit” in press reports of the incident. Nor had Resch said anything as he handed over the cash.

No one could even give the police an accurate description of the thief. What the police were told was that the man was about 5-foot-8, thin, 30 to 35 years old, with a long, clean-shaven face, and wore a light grey suit and cap.

Resch claimed the man was of foreign birth, which was a conclusion he reached based on the bandit’s complexion and facial features. He also based his opinion on the note, saying it was composed of rather crude letters and appeared to be written by someone not familiar with English.

In reality, the note was succinct and to the point, as well as written fluidly — without major breaks or hesitations — which is typical of someone with a good command of written English. How could it be otherwise, since Resch understood and immediately obeyed the bandit’s instructions.

The teller also contradicted other witnesses by saying the man was dressed in a blue suit.

“Resch had little to tell of the affair,” reported the Tribune. “The note was pushed in front of him, he read it, his scalp tingled, and he handed over the cash without stopping to argue.”

The teller said he quickly handed over the money because he thought the robber had other accomplices in the bank, “and that guns would start popping if he failed to obey.

“I never thought the man would attempt a holdup like that alone,” added Resch.

No one suspected Resch of being part of the robbery, since he had an excellent work record. For 4 1/2 years, he had worked at the bank’s Logan Avenue and Main Street branch and had only recently been promoted to head teller and transfered to the Portage and Carlton branch.