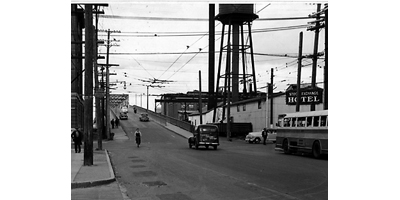 A bridge of urban legend

Point Douglas Councillor Mike Pagtakhan said it’s time to do something about the Arlington Bridge. A 2011 engineering report rated it as in decidedly poor condition, with many areas heavily corroded. The report recommends that the 103-year-old bridge, linking the downtown and North End and crossing the CPR main yards, should be replaced by 2020. Pagtakhan’s fear is that the traffic bridge will be decommissioned and never replaced with a viable option.

The bridge crossing the CPR yards “is getting near the end of its useful life ... The Arlington Bridge can not handle large and heavy vehicles, not even school or transit buses. Both ends of the bridge are very steep and this makes it very hard for people who are walking or riding bicycles, and even harder for seniors and others like people with disabilities, children, and people with strollers or walkers,” according to the city.

The options under discussion are replacing the bridge and widening it from two to four lanes, widening the McPhillips Street underpass or creating a new route between Arlington Street and the Slaw Rebchuk Bridge, or relocate the CPR rails beyond the Perimeter.

In November 2014, the city commissioned a study about the bridge’s future, complete with public consultations.

The bridge has long been the subject of controversy and myth-making. One of Winnipeg’s more famous urban legends is that the Arlington Bridge was originally fabricated to span the Nile River. This urban legend has become widely accepted history.

While such tales are myth, the reality is that the bridge has always been regarded as extremely hazardous. In 2009, when the city erected traffic lights to make the bridge safer, spokesman Ken Allen is quoted in a Free Press article as saying that: “The signals on Arlington Bridge are to provide control for vehicles proceeding off the bridge. During icy conditions, stopping on the down slope approaching Logan or Dufferin is very, very difficult.”

Indeed! Any driver poised on the edge of either down slope looks on in horror as the bottom of the roadway appears to drop off into a heart-wrenching void. Years ago, the drop was regarded with such fear that streetcar operators refused to venture onto the bridge.

“Another chapter was added to the long-drawn out controversy to get street cars operated over the Arlington Street Bridge,” according to a May 12, 1916, article in The Voice. The article quoted the views of Winnipeg Electric Street Railway Company employees and union representatives, company lawyers and city officials appearing before a Public Utilities Commission. Union lawyer T.J. Murray said employees felt it was unsafe to operate streetcars over the Arlington Bridge using then existing braking equipment. Employees feared the possibility of a runaway rumbling down the bridge’s slope creating untold havoc as it careened along the tracks. “Elements of danger include the narrowness of the bridge, the steepness of the grade, and the fact that either end of the approaches run into the intersections of the streets upon which other lines of street cars operate,” according to the 1916 article.

“(MLA) R.A. Rigg quoted the report of G.L. Guy, the commission’s electrical engineer, arguing that the engineer himself was not satisfied with the experiments conducted under his direction.

“John Lodge (referred to as an ‘expert motorman’) stated that in thirteen years’ experience with the Westinghouse magnetic brake, he had never known it to fail. He recommended it for use on cars operating over the bridge.” Another motorman, Sam McCauley, who had 17 years experience across the world and had been a “Hill pilot” in Britain, claimed the bridge was “more dangerous” than any other hill he had ever operated on, and that added brakes would not eliminate all the danger.  “All agreed that weather and rail conditions here were worse than anywhere else.” Another expert for the company claimed adding magnetic brakes would not make the slightest difference in stopping streetcars as they plunged over the precipice.

“If you order us to operate cars over the Arlington Street Bridge, we will do our best to operate,” said lawyer Edward Anderson on behalf of the Winnipeg company. “If you order us to put further equipment on the cars in order to operate them, we will put on that equipment; but we want to place on record that we take this position — no matter what equipment we put on the cars, nor how we operate them upon the bridge, serious accidents are bound to occur.”

All records indicate that only one trial crossing of the bridge was ever attempted, despite the city applying for service over the bridge in 1914. The 1916 article referred to a test made with a weighted car that showed the existing streetcars lacked adequate braking equipment to carry a load over the steep grades on the bridge. In the end, the tracks were never used and were ripped out in 1926.

The Arlington Street Bridge originally came into existence as the Brant and Brown streets bridge. The Brown Street approach to the bridge was later renamed Arlington. The bridge officially opened on February 5, 1912, with few people in attendance.

The origin of claim that the bridge was originally yo cross the Nile is attributed to engineer William D. Hurst, hired by the city in 1930. He became Winnipeg’s chief engineer in 1944, according to the Winnipeg Tribune. But in discussing his career after being named the chief engineer, he makes no mention of the alleged Nile connection. An article in the Manitoba Historical Society magazine Manitoba Transactions (1958-1959) said the bridge was bought at an auction from the Cleveland Bridge and Iron Works of Birmingham. “The bridge had been built to span the Nile River in Egypt, but the people who ordered it failed to take delivery. It was transported over here and erected across the CPR tracks at what were then Brown and Brant streets in 1910-11.” The problem is that there is no evidence in city records or newspaper accounts from the period to substantiate this claim. In fact, the bridge was far too short to have possibly spanned the Nile. In reality, the bridge was prefabricated by Cleveland Bridge & Engineering Co. of Darlington — not Birmingham — under specifications to span the CPR tracks and subsequently transported to Winnipeg for installation. The same company built the Goz Abu Goma Bridge, a railway bridge across the White Nile at Kosti, Sudan. The bridge, which has nine main river openings and is about 536 metres long (the Arlington Street Bridge is 304 metres long), was completed in 1911.

The oft-repeated Nile story was even related by Winnipeg filmmaker Guy Maddin. In My Winnipeg, Maddin said the bridge is “a vast span of frosted steel girder arching over the city’s sprawling train yards” bought “at a knock-down price to bargain-crazy Winnipeg.” In his description of the bridge in its so-called “foster home,” it dreams “of the lush and joyous setting originally planned for it — and pops a girder out of place.”

It’s a romantic tale that may only end when the bridge is replaced or decommissioned.