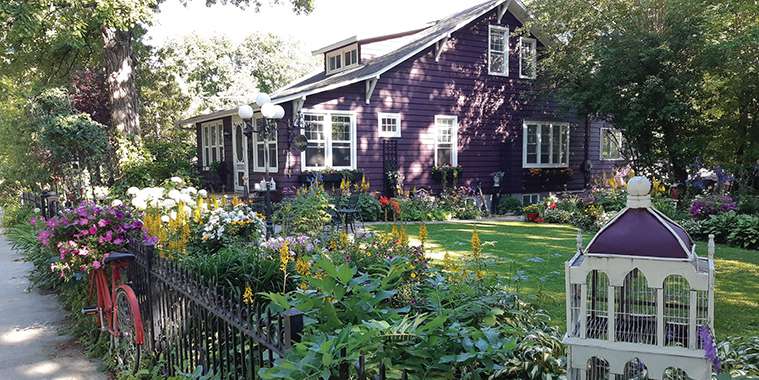 In the early 90s, the Winnipeg Regional Real Estate Board started a garden contest based on a successful one run by the Victoria Real Estate Board. The criteria included judging both front and back yards. While it was a pure pleasure and a visual delight to see the results from homeowners taking such pride in their yards, some were also productive gardens featuring a variety of delicious and nutritious fruit and vegetables being grown.

In 1997, Take Pride Winnipeg approached the Board and suggested we do a contest together — and alongside what is now referred to as Winnipeg in Bloom — we created an annual curb appeal award that the Board sponsored and presented every year. The Winnipeg in Bloom annual contest focused on front yards, since all Winnipeggers going out for a walk, running, cycling or even driving could see the beauty of neighbourhoods where many owners were putting extra effort and thought into presenting a beautiful front yard.

The contest ran for many years, getting bigger and better, with significant sponsors such as Home Depot taking part, and well-attended award ceremonies held at Rainbow Stage in Kildonan Park.

Fast forward to 2022, and along with so many other popular local events that were put on a multi-year hiatus, Take Pride Winnipeg is proud to bring back Winnipeg in Bloom. This front yard garden contest showcases how citizens increase the curb appeal of the city by planting fantastic gardens in their front yard and boulevards. Homeowners have always taken pride in their homes and yards, but if anything, it is even more the case now since the pandemic has resulted in people spending more time at home. In doing so, homeowners have sought out ways to make the space they have, be it inside the home or out in the yard, more functional and enjoyable for their family and friends.

This year, there were 32 entries to the Winnipeg in Bloom contest, which has plans to attract even more entries as the contest expands beyond the city in 2023.

Take Pride Winnipeg’s Executive Director Tom Ethans emceed a wonderful evening this week with contest entrants and handed out prizes to the winners. As one of the entrants stated, all of them are winners for what they do to make our city and neighbourhoods look better. Ethans mentioned a number of times throughout the evening, in reading out some of the special messages that were part of this year’s entries, that a recurring theme was community pride and inspiration for neighbours to do more to spruce up their front yards.

Following are a few excerpts from some of the contest entrant submissions:

• Our front yard gardens have been transformed many times in the 30 years we have lived here. Currently filled with over 100 different perennials, each week from the beginning of spring to late September our gardens have something different to offer.

• The front garden has had a tremendous impact on me. I feel a sense of joy every time I pull into the driveway. I have enjoyed watching the plants grow and have had many nice compliments from neighbours about the flowers. It has been wonderful to watch the fat bumblebees and even monarch butterflies visiting some of the flowers.

• There are a large variety of (mostly native) plants, which feed all members of the ecosystem, including us! Arctic kiwi, plum, grape, cherry, tomatoes, zucchini, garlic, peas, herbs and more are all grown among the flowers. Yet the best harvest we have had from our garden is community — the folks we meet and chat with while working out front.

• My garden represents nature’s beauty and its circle of life. It is a labour of love which offers tranquility and pride to the community. Each bloom is a reminder we have much to appreciate each summers day.

The addresses of this year’s winners are 25 Cunnington Avenue in Old St. Vital, 889 Valour and 575 Banning in Winnipeg’s West End, 200 Tuxedo in Tuxedo, 218 Cathcart in Charleswood, and 115 Linden in Frasers Grove near Kildonan Drive. Check out these gorgeous gardens in person and maybe you’ll be inspired to take part next year!

As a refresher on who Take Pride Winnipeg is and what they do, they were established in 1991 and are a registered Canadian charity whose mission is to inspire community pride, raise public awareness and promote citizen responsibility in making the city of Winnipeg clean and beautiful through multiple programs.  Some of their programs include Team Up To Clean Up, the mural program with over 600 murals painted across the city, Brush Up Winnipeg which has seen over 100 homes painted for seniors in need, along with education programs and hiring students every spring and summer to help remove graffiti and to work with Business Improvement Zones across the city.

The Winnipeg Regional Real Estate Board is proud to be involved with this community-minded organization which does so much to engage citizens in making our city and province clean and beautiful.

With sponsors like Access Credit Union and the Winnipeg Regional Real Estate Board, Ethans said he looks forward to growing this contest next year as the gardeners do with their plants and flowers. To see more pictures of these lovely yards, go to www.takepride.mb.ca as they plan to post all of them in the next two weeks.