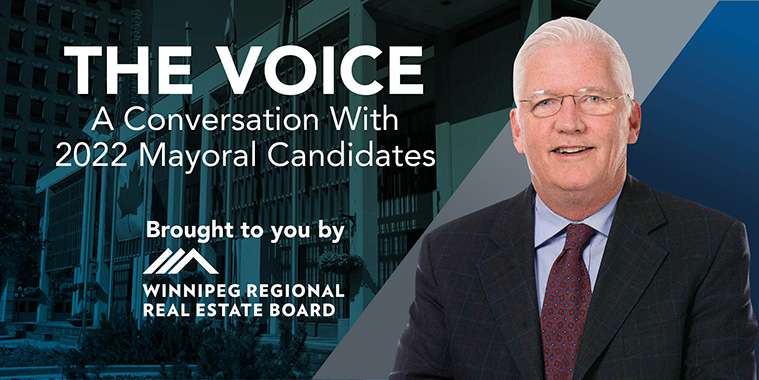 Meet your mayoral candidates via podcast

With less than three months to go, the race to become Winnipeg’s 44th mayor just became more interesting as Charleswood-Tuxedo-Westwood city councillor Kevin Klein entered the race. He is the 13th candidate seeking to lead our city over the next four years once the final vote is counted on October 26.

This year’s contest is wide open as two-term mayor Brian Bowman is not running this time around, and there is a real mix of candidates vying for the job. Another prominent city councillor in the race is Scott Gillingham, along with former mayor Glen Murray, former member of parliament (MP) and strong contender in the 2014 mayoral election Robert Falcon-Oullette, and former Manitoba Liberal Party leader Rona Bokhari. With the addition of runner-up candidate from the 2018 mayoral election, Jenny Motkaluk, there is a lot to unpack in the final months of the campaign.

If all these choices sound overwhelming, we are here to help. Beginning this month, we will be broadcasting a series of podcasts where we interview each mayoral candidate on their intentions should they be successful.

The deadline to enter the mayoral race is September 20, so we may even have a few more candidates to add, although not all will remain on the ballot for election day if they are not successful in submitting a minimum of 250 eligible voters during the nomination process from September 14 to September 20.

A lot of work has already been done leading up to this election in terms of laying the groundwork for the long-term growth and development of Winnipeg. Specifically, the approval of this year’s OurWinnipeg 2045 visionary plan, and the more defined,  targeted, city-wide secondary companion document called Complete Communities 2.0.

There was also the approval of a Transit Master Plan in 2021, and the review and development of Winnipeg’s essential Transportation Master Plan 2050 is in its last stages, with the final draft slated to go to City Council in spring of 2023. Transportation and land use are inextricably linked, so this Plan will be a key test for seeing how the new mayor and city council can work together in the first year of their term.

Similarly, the review and implementation of civic governance report recommendations along with the development of a new 2024-27 multi-year budget in 2023 will also be pivotal in determining the type of progress needed to shape our city’s future on major issues such as housing and infrastructure development.

Speaking of priorities, the Winnipeg Regional Real Estate Board has developed four main issues to focus our attention on for this year’s civic election and beyond, given how critical the Board feels they are to Winnipeg’s future success and liveability. They are:

• Make Winnipeg a welcome city for everyone to live and prosper; and,

• Place strong emphasis on team building and leadership at city council and the civic administration to move things forward.

For example, Manitoba is one of the three provinces in the country with the lowest number of housing units per capita — well below the national average — while Canada overall is lagging behind other G7 countries. While recent July market results show our average single-family sales price coming down after spiking earlier this year, it is instructive and noteworthy to see how a supply restricted inventory — in both resale and new housing stock — can put extreme pressure on elevating house prices. This in turn makes them less affordable and accessible to Winnipeggers seeking to buy a home. CMHC’s latest report on Manitoba makes it abundantly clear increasing our housing supply to provide more choice and affordability will continue unabated over the next number of years.

The questions we posed to each candidate relate to the four above priorities. Seven candidates have already been interviewed with the remainder to be recorded this month. The response has been very positive, and not only will the podcasts be made available to our Members and the public, but candidates are submitting 500-word written responses to our questions which will be published in this space commencing next week. The five questions we asked of each candidate were:

1. As Mayor, what strategies will you implement to reverse the trend we are seeing where more people are leaving our city to go to other provinces than coming here?

2. What are your strategies to attract business investment to Winnipeg? What sectors do you
believe should be focused on?

3. What steps will you take to address the issue of Manitoba being one of the provinces with a chronic shortage of residential dwelling units?

4. How will you build and lead a team at City Council to ensure we receive funding to support growth enabling infrastructure?

5. What benchmarks and actions will you take to move key projects along faster that will help sustain delivery of core civic services?

“I am excited to launch our upcoming series of mayoral candidate podcasts so we all can hear what they have to say on important priorities impacting Winnipeg’s future success,” said Boris Mednikov, chair of the Winnipeg Regional Real Estate Board’s Government, Stakeholder and Public Relations Committee.

The podcasts are an excellent way for you to discover more about each mayoral candidate and what they offer. Scan the above QR code each week to tune in and learn more.