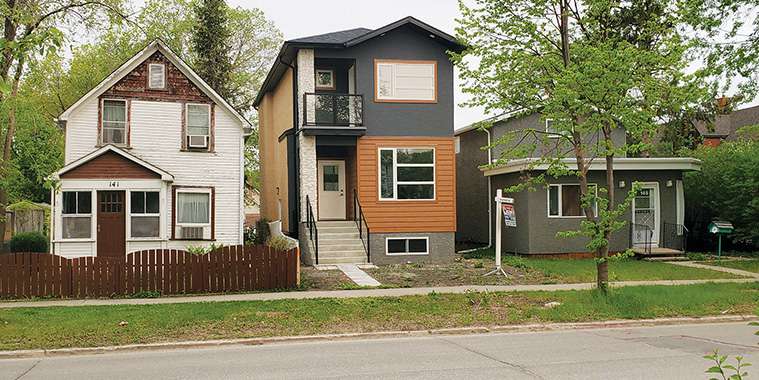 A lot has been written this year about the housing crunch with not enough supply to meet demand. This has been an ongoing issue across Canada and in the U.S.

Manitoba has been singled out by both Scotiabank and CMHC as a province chronically undersupplied and needing to step up its construction of new residential dwelling units to keep house prices affordable. Most affected are newcomers and other first-time buyers such as millennials who are just trying to come up with a down payment and cover closing costs — including our high land transfer taxes — to buy their first home.

Now that we are into a higher interest rate environment — with more increases on the way to help bring Canada’s inflation rate of over 8% back down to a far more modest level — financing the cost of a home purchase will become more difficult in next few months than it has been in years in comparison to  what were historic low interest rates, especially during the pandemic when the Bank of Canada dropped the overnight lending rate to 0.25%.

A very good article was published in the U.S.-based National Association of REALTORS® (NAR®) fall 2021 On Common Ground publication that mirrors our challenges here in Canada about how everyone is grappling to find solutions to boost housing supply. The entire issue was dedicated to addressing the housing shortage. The article cites some of the main hurdles that are now well documented in both countries, such as rising material costs due to supply chain issues, thin labour pools with the need to train more construction workers, and restrictive land use policy that makes it difficult to bring on new housing units in a timely fashion.

As a result, the affordability gap widens when you are seeing a growth in demand for housing based on population increases and demographic trends without the associated response to increase the housing supply which would in turn increase housing affordability.

One obvious solution that is very applicable to Winnipeg — given the uncertainty around what water and sewer capacity exists to serve increased infill development and higher density housing to make our city more fiscally sustainable — is investing in infrastructure. In a special report written for the NAR® on housing affordability, lead author Ken Rosen said, “Large scale infrastructure for the 21st century provides a once-in-a generation opportunity to avoid the mistakes of the past and instead build infrastructure and housing together in a way that plans for inclusive and sustainable growth.”

Here are some other highlights worth citing from this report that speak to supporting local housing affordability:

• Up-zoning and rezoning policies which involve converting low-density, or commercial parcels, to higher density housing lots. Broadly, these policies should focus more specifically on underlying zoning regulations that can be modified to support the development of new housing over time. One obstacle often brought up here is do you need the minimum parking requirements that can impede the ability to make a higher density multi-family project viable.

• Inclusionary zoning is a direct approach, by which localities or states can require developments to include affordable housing, often in areas where it is undersupplied or would provide a large public good. It is important for inclusionary zoning to align with local market conditions to ensure that these policies remain economically and socially viable and do not turn into a barrier to development.

• Municipalities and public agencies should assess their landholdings to identify underutilized land or find vacant or blighted lots and rezone these lots for housing.

• Expedited permitting processes should be a major facet of regulatory reform at the municipal level. With faster approval times, developers could produce housing more consistently, which has the potential to lower construction costs and allow for lower housing costs over time.

• The use of accessory dwelling units is not new but provides a relatively immediate way to relieve pressure on the housing market in a region. These units provide a benefit for municipalities in that they increase density, often without the need for major zoning changes and with a more limited amount of construction activity in residential areas.

Another article that appeared in the On Common Ground housing affordability issue focused on repurposing buildings to help solve the U.S. housing crisis. This again is something Winnipeg must consider doing more of, with conversions already happening downtown with the former 433 Main Street office building being converted by Alston Properties into one- and two-bedroom luxury apartments for rent, while the most notable conversion will be the old Hudson’s Bay store downtown which will add almost 300 affordable housing units to the area, along with commercial ventures that will include restaurants, a museum and gallery.

As pointed out in this article, adaptive reuse of existing structures can be key to addressing a regions’ affordable housing shortage. How do you better utilize your built environment for housing?  NAR® states that incentivizing the conversion of unused or underutilized commercial real estate through tax incentives could offer significant benefits for families struggling to find affordable housing. It was also noted that historic buildings can be perfect for affordable housing because they already exist, and renovating them is often cheaper than building from scratch. The article concludes by saying that  finding new purposes for older buildings requires vision and an ability to see beyond the challenges of zoning restrictions, parking regulations or structural items. It is possible and beginning to happen in a number of U.S. cities.

As the Winnipeg Regional Real Estate Board learned as far back as 1994, when attending a national meeting in Ottawa where they heard a presentation from the Columbus Housing Partnership, a non-profit affordable housing initiative created by the Columbus REALTORS®, you can gain valuable insights from looking at what NAR® and its state and local associations are doing to address housing and applying them to our market.

As a direct result of that eye opening meeting, the Winnipeg Regional Real Estate Board set up its own working group, and within a few years created  the Housing Opportunity Partnership (now commonly known as HOP) and is still active today building affordable housing in neighbourhoods such as William Whyte.