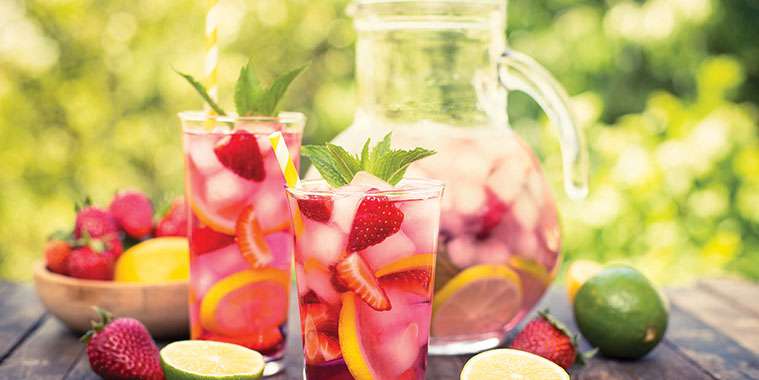 Lemon juice, water and sugar. The basic recipe hasn’t changed much in more than 1,000 years, but nothing quenches your thirst better than a tall, icy glass of lemonade.
The exact origin of the lemon hasn’t been easy to trace, but new research has clarified its lineage as a sour orange and citron hybrid. The discovery of fossilized leaves in the Yunnan province of China proves citrus has been around since the late Miocene epoch, some 8 million years ago, so it’s likely that some style of lemon drink was consumed there. However, the earliest written record of a lemon beverage actually comes from 12th-century Egypt.
Along the Mediterranean coast, medieval Egyptians enjoyed kashkab — a drink made from fermented barley and flavored with mint, rue, black pepper and citron leaf. As lemons were introduced to the region, this concoction became qatarmizat — essentially, a lemon water sweetened with sugar.
Now fast forward to 17th-century Europe when lemonade debuted in Paris in 1630. Made of sparkling water, lemon juice and honey, vendors sold it from tanks strapped to their backs. Britain’s contribution to the lemonade craze came by way of chemist Joseph Priestley who invented an apparatus for making carbonated water. By the 18th century, lemonade had made its way to America along with waves of European immigrants. During the Victorian era, the women’s temperance movement pushed lemonade as an alternative to alcohol.
Even the circus has had a starring role in lemonade’s long history. By the 19th century, both ice and the travelling circus had hit the scene and both were taking off, marking the first ever mention of pink lemonade. As to what gave it that pink hue? Don’t ask! Theories range from cinnamon candies to the dirty wash water from a dancer’s pink tights. Ew.
Did you know that lemonade has been scientifically proven to be the best thirst quencher? Researchers have found that sour and tart flavors stimulate the salivary glands more than any other taste. And since acidity masks less refreshing flavours, like sweetness, it means that just one sip of a sour, sweet lemonade can provide immediate relief for dry mouth and leave you feeling refreshed.
Tart or sweet, pink or golden, crystal clear, cloudy or carbonated, when life has handed us a lemon, we always know how to turn it into something nice. Here are two takes on this quintessential summer quencher.

Traditional Lemonade
This classic lemonade recipe is the perfect combination of thirst-quenching sweet and tart. When using a clear pitcher, adding a few of the juiced lemon halves makes it look especially pretty.
Ingredients:
8 lemons
1-1/3 cup white sugar
8 cups water, or more as needed
Directions:
1. Juice lemons; you should have 1 cup of fresh juice when you’re done. Juice more lemons if you need to.
2. Strain juice through a strainer to remove any seeds. If you like pulp, separate it from the seeds and scoop it into the juice.
3. Combine juice, sugar, and water in a 1/2-gallon pitcher. Stir until all the sugar dissolves. Taste and add more water if desired.
4. Chill and serve over ice. Serves 8.
Tip 1: To make juicing the lemons easier, roll each firmly between your hand and countertop before cutting in half and juicing. This is a good workout for your biceps. Win win!
Tip 2: Adjust the lemon juice and sugar quantity to your personal taste. There’s no wrong answer.

Old Fashioned Pink Lemonade
This fun and festive twist on a circus classic is always pretty and refreshing. Serve in pitchers garnished with mint leaves, strawberries and raspberries, or orange and lemon slices.
Ingredients:
2 cups white sugar
9 cups water
2 cups fresh lemon juice (16 lemons)
1 cup cranberry juice, or other red juice like strawberry or raspberry or even watermelon, chilled
Directions:
1. Juice all the lemons. Strain juice through a strainer to remove any seeds.
2. In a large pitcher combine sugar, water, lemon juice and cranberry juice.
3. Stir to dissolve all the sugar.
4. Chill and serve over ice. Don’t forget to add garnishes. Serves 12.
Cheating is allowed. If you can’t bring yourself to juice all those lemons, go ahead and buy a frozen concentrate and garnish with little cocktail umbrellas and fresh fruit to dress it up. Just don’t tell anyone!