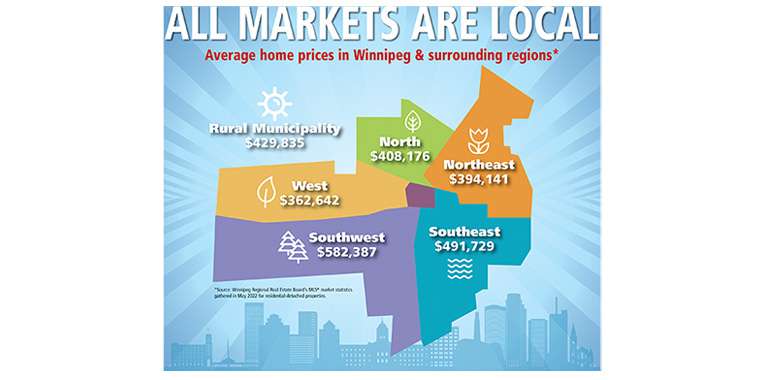 By Peter Squire
This is a busy week for real estate as the Canadian Real Estate Association (CREA) will be releasing its national market release and the Winnipeg Regional Real Estate Board (WRREB) will get an update on its June numbers when it does its mid-month review.

So far this month, MLS® listings in our local market have improved notably along with the warmer weather and more suitable curb appeal conditions. We are now seeing more than 3,100 active listings available for sale, when just a month ago they were at 2,400, while in April they were sitting at just over 2,000. However, as we always do see more listings at the onset of spring, and given it has been so late in coming this year, it is understandable June is ushering in more listings for discerning buyers to choose from.

And while CREA’s mid-month market release for the month of May will garner a lot of headlines — given how the higher interest rate environment is impacting more expensive housing markets like Toronto and Vancouver — it must be stressed that all markets are local and not all behave the same. Helping to create new real estate market stories this week and beyond is the spectre of Bank of Canada Governor Tiff Macklem considering raising interest rates 75 basis points in July — from the current overnight rate of 1.5% to 2.25% — to assist in lowering inflation. To think that up until early March this year our overnight rate was only at 0.25%!

RBC economist Robert Hogue came out with a report based on May market results indicating Toronto, Vancouver, Montreal, Ottawa and Hamilton all saw “significant pullbacks in home resale activity”. As he says, the winds are shifting and becoming chillier. But in our local market, sales have actually increased over the last three months. This was most pronounced last month, when we saw an 18% increase from 1,461 to 1,723, resulting in May being the WRREB’s second-best May on record, second only to the supercharged May 2021 when sales reached over 2,000 for only the second time in our 119-year history.

Compared to the same time last year — when sales were surging again to the end of the month of June with a spectacular monthly total of 1,943 — listings are staying ahead in both active inventory and new ones coming on the market. This is encouraging as it will contain any price increase that may occur, given that there are more choice of listings and fewer sales compared to 2021.

Will June’s healthy injection of new listings create the potential for another month of increased sales from the previous one? This is unlikely, but based on the first 14 days, sales are only down 8% from the same period in 2021, so if that pace continues for the balance of June, another consecutive month of 1,700 plus sales is possible and will be viewed as one equivalent to last year. So we are clearly not experiencing the same downward pullback as indicated by RBC that is occurring in other major housing markets across the country.

Even if prices settle down in June — as they started to do in May with only a 1.6% increase over April — our local market, based on a recent survey by Moneywise, has slipped somewhat in its ranking as one of the most affordable cities in Canada. Winnipeg is now ranked 13th as it saw an increase in housing prices from 2021 to 2022 of 13.6 %. In comparison, Regina was ranked as the most affordable metro area in Canada with only a 1.6% increase. Saskatoon fared better than Winnipeg as well, with prices up only 3.6% and ranking it as the 11th cheapest housing market in Canada. Edmonton is only one behind Winnipeg, sitting in 14th place, but it did see a higher price increase of 9.6% from 2021.

One Canadian metro housing market which used to be neck and neck with Winnipeg in the years prior to the pandemic was Halifax. This has changed dramatically in the last few years as Nova Scotia’s capital city is nearly $155,000 higher at $499,000 having seen a 36.9 % increase in 2022.

Moneywise also reported on cities with best job growth, based on its most recent BMO Regional Labour Market Report Card. When that was factored in with Winnipeg’s housing affordability, our city ended up being ranked 4th in the country. Winnipeg’s labour market moved up 14 places from its previous ranking to end up in 10th place.

The number one city for both affordability and job creation is Regina, as not only is it the most affordable metro in Canada but it is ranked 5th in its labour performance, which is hard to beat. But cities like Regina and Winnipeg can have the best of both worlds if they remain cognizant of housing supply issues and labour market challenges, if their intention is to maintain the high ranking they achieved this year.

The two attributes of a strong local economy — housing affordability and a healthy job market — can only be realized long-term if city leaders are proactively planning to build additional housing supply to reasonably accommodate the increased demand that will come from an expanded labour force needing the requisite housing. The statement “Build it and they will come” works for the local housing market and our economy as effectively as it does for baseball.