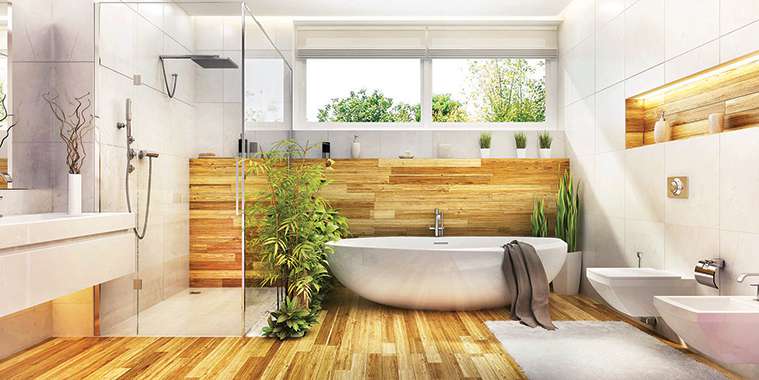 The 6 most common types of bathrooms

In a real estate listing or on a floor plan, the term bathroom appears on various spaces with different sizes, different means of access and assorted ceramic bathroom fittings. Even the term “bathroom” is misleading because bathing might not be the room’s designated purpose. In Canada, the term “washroom” is often used in place of bathroom, and the purpose of the room is not primarily washing.

It’s worth considering a few types of bathrooms to be sure that everyone is using the same terms and speaking the same language.

Until fairly recently, the “master” bathroom was related to and exclusively used by the largest or “master” bedroom. Today, the term “master” has been replaced with “primary” to describe the largest bathroom or bedroom to be more sensitive to the marketplace. This bathroom can also be referred to as an ensuite bathroom.

As the main or hall bathroom name would imply, this bathroom is accessible to and used by multiple members of a residence, and it’s located on a hallway serving numerous bedrooms.

As this bathroom services more than one individual, it might be partitioned for privacy by a second door, with the bathing and toilet functions taking place separately from the sinks and vanity area.

Located between two bedrooms, a Jack-and-Jill bathroom has doors accessible from both bedrooms. One can assume that some imaginative architect or homebuilder first used this term to describe a bathroom that two children of different genders could use.

A half-bath includes only a toilet and sink with no bathing facilities. It’s typically used by guests and is located near public and entertaining areas on the first floor of a residence. The half-bath location is not close to bedrooms or the family areas of a home to preserve privacy. In pre-war urban apartment buildings, a half bath was often located near the kitchen for domestic household employees’ exclusive use.

A quick explanation of the term “powder room” is appropriate, as both genders have played a role in the name. This term had its origin in the 1920s when indoor plumbing was widely accessible, and it came into use to replace “ladies room.” Ladies did not use the bathroom; instead, they retired to a space dedicated to powder their noses.

In Colonial times, when men wore powdered wigs, the powder room allowed men to engage in this activity. Whatever the origin, the term is still used in real estate today. Interior designers view powder rooms as statement spaces to make guests feel pampered.

Whether a first-floor half-bath or a powder room, the presence will increase the home’s value and convenience.

If such a term can be used, standard bathrooms consist of a sink, toilet and bathtub, which may or may not also have a shower attachment. An Englishman, William Feetham, a stove maker, is credited with the invention of the modern shower in 1767. A bathroom without a bathtub but with a shower or shower “stall” is known as a three-quarter or 3-piece  bathroom.

This type of bathroom was popular in America in the 1940s and 1950s, when the total number of bathrooms in homes grew to two or more. Showers were standard in new homes built in the 1960s, and in the 1980s, large showers with multiple sources of water or jets were in fashion.

Bathrooms with showers were less expensive to build, required less space and responded to the popularity of showering as opposed to bathing in a bathtub. It’s possible to approximate the date of a house or apartment by the number and placement of original bathrooms and their type.

To complete the scenario, while not standard, it is possible to see a listing with a “six-piece bathroom,” which would include all the standard features plus a bidet.

Bathrooms, their location in a listing, their size, components and style can help or hinder a real estate transaction. Just as fashion has entered and influenced every other aspect of housing, bathrooms, as seen in any plumbing or tile showroom, present seemingly endless options.