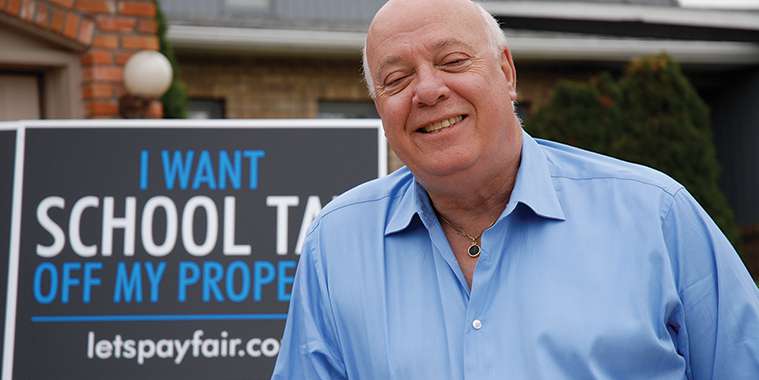 Twenty years ago, REALTOR® Lorne Weiss began championing an issue that wasn’t fair to property owners — the education portion of our property taxes — and he wanted to do something about it. As president-elect of the Winnipeg Regional Real Estate Board (WRREB) at that time, he felt strongly that this needed to be dealt with. In a civic and legislative affairs committee position paper that the WRREB published in 2001, there is an entire section dedicated to property taxes. The recommendation was to remove the school tax portion of our property tax bill.

That same year, Weiss wrote a letter to the Honourable Drew Caldwell, Manitoba’s then Education Minister, stating “thanks for the opportunity to meet with you and the Honourable Greg Selinger on the important issue of the overreliance of property taxes to fund education”. The letter went on to talk about the inequities in having various school divisions throughout the province and in Winnipeg at a disadvantage in their ability to raise the needed funding to educate children because some divisions in particular did not have an adequate industrial tax base to offset the tax burden property owners incur.

Weiss also thanked the government at the time for introducing its first tax credit to provide home owners with some education tax relief, noting their agreement in that there needed to be a broad-based coalition as well as an effective public campaign to bring more pressure for change as the present situation is not sustainable.

The rest is history, as they say, with Weiss remaining indefatigable in his pursuit to convince the government to fund education in a more equitable way that provides relief to property owners. It became clear through public polling throughout the years that Manitobans understand education is a core provincial service that should not be so dependent on its funding from property owners.

After becoming president of WRREB in 2002, Weiss got directly involved in the Manitoba Real Estate Association (MREA) and began the formative stages of setting up a coalition of other supportive associations like Keystone Agriculture Producers, the Manitoba Association of Cottage Owners and, of course, the WRREB.

“It would not be overstating it at all to say that I found my volunteer home at the Manitoba Real Estate Association,” said Lorne Weiss, Chair of MREA’s Manitoba Political Action Committee (MPAC) since 2003.  “I have had amazing support to advocate on behalf of REALTORS® across the province and the education property tax issue is one where the government of the day understands there is a better way to fund it.”

The education tax finance coalition Weiss headed up over an extended period of time, including the public campaigns they ran, made some strong statements as exemplified by this one:

“Imagine a system where we funded education like we do health care — through provincial general revenues. In that way, all of us pay for education and take equal responsibility for caring for the achievements of the next generation. It becomes the care and responsibility of all of us, not just people who own a home.”

Weiss served as MREA president in 2011. As the chair of MPAC, he has continued his tireless advocacy for a more equitable education funding model that moves away from reliance on property taxes.

Five years ago, MREA commissioned a research study to deepen its advocacy on education finance reform. The study called for better cost-efficiency and structural change, and savings that could be reinvested back into the classroom. This message was carried forward in multiple meetings with government, most recently with Manitoba Finance Minister Scott Fielding.

The 2021 Manitoba budget contained welcome news. Starting this year, the province will begin lowering education property taxes by 50% over two years (25% per year) for residential and farm properties, and 10 per cent this year for other types of property, in the form of tax rebates.

According to Minister Fielding, “Homeowners across Manitoba can expect an average rebate of over $800 over two years.”

The announcement marks a victory in a decades-long advocacy effort.  It demonstrates that advocacy is a marathon and not a sprint, and that bolstering MREA’s advocacy efforts with research has been a worthy endeavour.

Reducing the taxes will help to ease the occupancy cost burden associated with owning a home in Manitoba at a time when pressures on homeownership affordability are rising. It should also have a positive impact on consumer spending ability, which is critical to the broader health of the economy.

In moving towards a fairer and more even system of funding public education, the MREA believes the province has an opportunity to strengthen the education system while making Manitoba a more attractive place to own a home and operate a business.