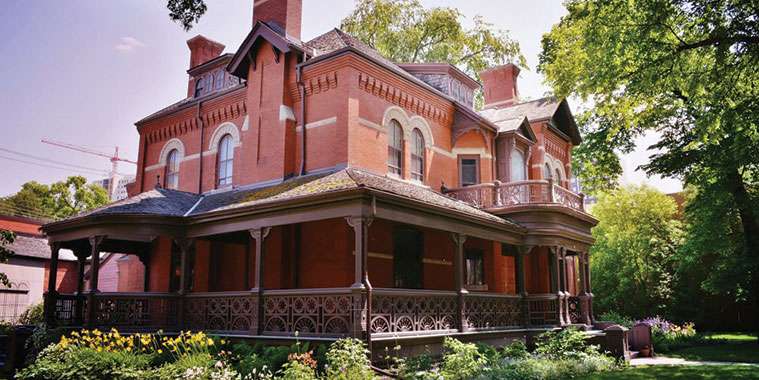 If you’re trying to come up with something new to do this coming Canada Day, why not go for a walk or bike tour around The Loop? With annual July 1 celebrations cancelled or going virtual this year, this is a great way to still celebrate the day with other people while still maintaining physical distancing and being active.

The Loop/La Boucle is a 9.5 km self-guided urban walking trail in Winnipeg. Taking approximately 3.5 hours to complete, the trail was developed in 2013 to showcase the city’s unique architecture, distinct neighbourhoods, iconic landmarks and historic sites throughout downtown, the Exchange District and St-Boniface.

The Loop was the idea of our very own Marina R. James, current CEO of WinnipegREALTORS® when she was formerly the president and CEO of Economic Development Winnipeg Inc.

“The idea for The Loop started after I had walked Boston’s famous Freedom Trail and questioned why Winnipeg couldn’t have its own urban walking trail,” she said. “It’s important to promote Winnipeg and its urban architecture, history and unique points of interest in a self-guided tour. We want to showcase Winnipeg as a walkable city and encourage the health benefits that go along with walking.”

Winnipeg is Canada’s 6th most walkable city, according to Walkscore.com, beating out major cities such as Calgary, Edmonton and Quebec. Adding this walkable feature to encourage exploration of our city centre is an important factor in that score.

The Loop can be walked in its entirety, or in stages, depending on how ambitious you’re feeling. There are also smaller “loops” that you can walk.  One small loop that’s a favourie of many begins at The Forks and is about 2.5 kms long and takes about 25 minutes to complete. You can start by passing through the Nature Conservancy of Canada’s Prairie Garden before walking over the historic rail footbridge (which crosses the historic confluence or “forks” of both the Red and Assiniboine rivers), over the Norwood Bridge into St. Boniface, and then along a tree-shaded path beside the Red River to Esplanade Riel and back across to The Forks.

There are over 60 points of interest that are highlighted along this year-round route, with plenty of places to stop and rest along the way. There’s something for everyone, from Fort Parka — an adventure park and splash pad for children 12 and under, to The Winnipeg Art Gallery or the Manitoba Sports Hall of Fame. There are parks and museums, stores and restaurants along the route.

Historic homes along the route include Dalnavert, the 1895 restored former home of Sir Hugh John Macdonald, son of Sir John. A. Macdonald, Canada’s first prime minister. Gabrielle Roy House was the birthplace of the influencial 20th century Canadian francophone author Gabrielle Roy. The stately Government House is a 3-storey mansion that was built in 1883 and has 23 rooms and 11 bathrooms. Archbishop’s House was built in 1864 and is one of the oldest stone buildings in Western Canada.

You can visit prominent Métis leader Louis Riel’s Tombstone, the Chinese Cultural Centre, the Manitoba Museum, the Manitoba Legislative Building and gardens, Old Market Square and The Cube, City Hall, St. Boniface City Hall and Sculpture Gardens, Fort Gibraltor and The Forks, all in one afternoon.

One point of interest peeking above the trees that many may have seen from Main Street and wondered about but never explored is the 30 ft. sculpture called Niimaamaa, a word recognized by Cree, Ojibwe and Métis speakers as “my mother.” It’s a stylized sculpture of a pregnant woman that represents Mother Earth and new beginnings. Discovering this and other hidden treasures not on the map is another reason to explore The Loop.

For more information as well as a map of the trail and points of interest, you can visit Tourism Winnipeg at tourismwinnipeg.com You can download a PDF of a brochure in both English and French. You can also get a printed version of the brochure mailed to your home by filling out their online print request form, or picking one up at most hotels across the city. Or use their interactive map directly from your cell phone. (Note that access to some venues may be limited due to current safety precautions.)

It couldn’t be easier to enjoy this wonderful highlight of our city this Canada Day, or any other day.