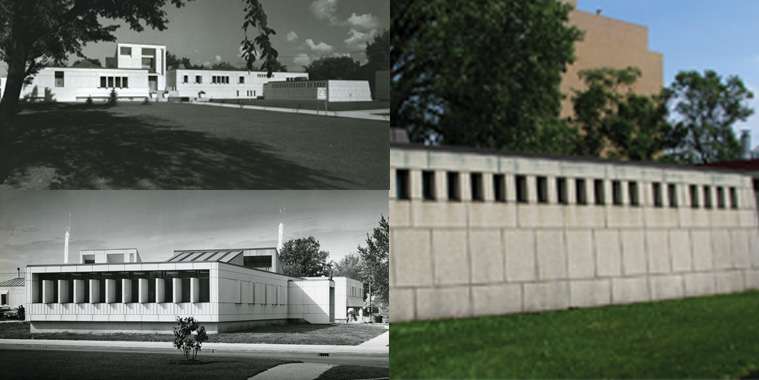 The former St. Boniface civic plaza on Provencher Boulevard was one of architect Étienne-Joseph Gaboury’s first large commissions. He would go on to design many of Winnipeg’s landmark buildings.

St Boniface’s old city hall, which also housed the city’s courthouse and police department, fell on hard times in the 1950s. It was bursting at the seams and was in very poor repair.

The city’s police chief, William Russell, pointed out the building’s deficiencies to his political bosses whenever he could. In one annual report he described the court space a “disgrace to the dignity of the court.” He also complained that the odour from the basement toilets was so strong that his staff had to constantly use freshener and began forwarding the bills to council for reimbursement

The situation was not lost on St. Boniface city council. They passed a motion in 1961 to spend $600,000 to construct a new city hall building which would include a new police station, health office and magistrate’s court. It was rejected by voters in a money referendum that October.

Undaunted, city council broke the project into three separate buildings — a police station, health unit and courthouse — as the construction cost of each building fell below the amount required for a referendum. The final phase, a new city hall administration building, would come at a future date.

The architect chosen for the new civic plaza was the relatively unknown Étienne-Joseph Gaboury. Born near Bruxelles, Manitoba, he graduated from the University of Manitoba’s faculty of architecture in 1958, then spent a year at the Ecole des Beaux-Arts in Paris. After two years working at a local architectural firm, he created E. J. Gaboury Associates.

The St. Boniface civic building was the first large-scale commission in a career that has created such landmarks as the Blessed Sacrament Church (1966); St. Boniface Cathedral (1970); Royal Canadian Mint (1971); Centre culturel franco-manitobain (1974); and the Esplanade Riel pedestrian bridge (2003).

In February 1962, St. Boniface got its first look at Gaboury’s plans and they were unlike anything the historic city had seen before.

The buildings took up the periphery of the block with a central park space connecting them to each other. Unlike the neighbouring city hall and its traditional red brick, large windows and soaring clock tower, Gaboury’s brutalist buildings hugged the ground. Its sharp angles and irregularly shaped, deep-set windows added to its brutalist credentials.

The 9,000 square foot Health Unit building at 233 Provencher Boulevard was the first to break ground on June 4, 1962 and opened on February 15, 1963. It housed the public health departments of both St. Boniface and the City of Transcona and featured a medical clinic, dental centre and prenatal room. The $145,000 construction cost was shared with the provincial and federal governments.

In March 1962, St. Boniface city council approved the expenditure of $246,990 for a new police station and $76,680 for a courthouse. They were housed in one 21,000 square foot building with separate entrances. Despite being situated along Dumoulin Street, the address of the building is 227 Provencher Boulevard.

The courthouse is a three-storey, split-level building that housed a magistrate’s court and administrative offices. Its construction cost was reimbursed over time through a long-term lease to the provincial government.

Police chief Russell and his 46-member police force finally got their new police station, which included a six-car indoor garage and 24-person capacity jail. Some areas of the police section of the building were partially below ground. Light was brought into the police station through skylights and to the jail through a series of narrow vertical windows at its roofline which gave it a fortress-like appearance.

At the grand opening of the building on October 30, 1964, Lieutenant Governor Willis said, “Probably no other city in Canada of less than 100,000 population can boast such a magnificent police building.”

In 2005, the Festival du Voyageur struck a deal with the city of Winnipeg to sell off its Club Rendez Vous property in St. Boniface for residential development in exchange for a $1.00 a year lease on the Health Unit building. It continues to occupy the space.

In 2012, the City of Winnipeg constructed a new regional police station on Dugald Road which meant the closure of the old St. Boniface location. By this time, the province had vacated the courthouse space.

The city then declared 227 Provencher Boulevard surplus to its needs and put it up for sale. Still on the market, the building can be renovated or the entire 25,371 square foot site can be redeveloped