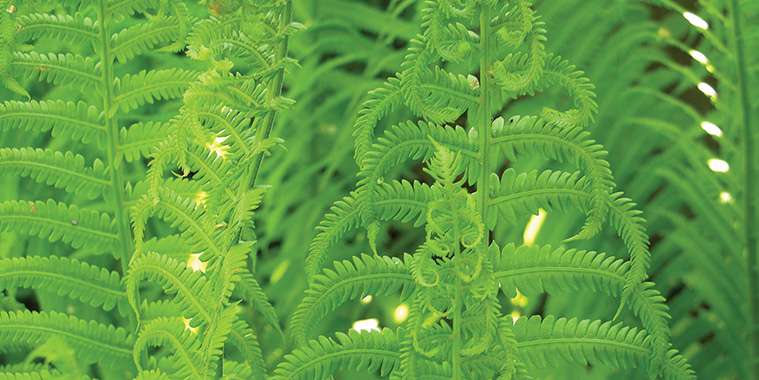 The secret life of ferns

Ferns don’t flower. So how do they reproduce?

Grasses, orchids and most bulb plants start growing by sending up one leaf (monocot) and other plants send up two (dicots). Both have flowers (though they aren’t showy on grasses) that are fertilized, then the flowers turn to fruit and they set seed. That is how new plants are born.

Except with ferns. There is no flower. They do not produce seeds. They produce spores, and a spore doesn’t produce a baby fern either. It produces a gametophyte, which produces the male and female cells that must meet to produce a fern.

There are all kinds of details about meiosis and mitosis and diploid and haploid; if you’re into biology, look into it, because it’s fascinating. To skip as many of the technicalities as possible, though, it works something like this.

If you look at the underside of a fern leaf, you may see dots, which are called sori. Sori are clusters of sporangia. Sporangia produce spores. Spores are a couple of microns across, so you can’t see them without an electron microscope. On some ferns, the sori will be different shapes; you might not see them at all. By the way, sporangia and sori are both plurals; the singular forms are sporangium and sorus.

Think of a spore like a seed. It isn’t a seed because it didn’t come from pollination, but it is like a seed in that it will be released from the ripened sporangium and blown on the air to a new spot. If the new spot is wet enough and warm enough, the spore will turn into a gametophyte. In the case of ferns, the gametophyte is called a prothallus. You can use either term, though.

The gametophyte/prothallus is a genetically unique plant; it isn’t the same as a fern. It is often heart-shaped and tiny, only 1/8 to 3/8 of an inch long. Its purpose is to produce the gametes of the plant, or the egg cell and the sperm cells, which it does through two different organs. In most types of fern, both the male and female organs are on one prothallus. In other types of fern, there are male prothalli and female prothalli.

The egg cell stays in the prothallus. The sperm cell, though, has a tail and it can swim, just like a human sperm. But to swim, it needs water. If the surrounding area is wet enough, the sperm cells can swim until they find either an egg cell (which can be from the same prothallus or, preferably, a different one) or die.

Once an egg is fertilized, it starts to grow into the fern. It remains attached to the prothallus, which has tiny rootlets in the ground. The prothallus feeds the fertilized egg for a bit and then dies, leaving the fern on its own to grow. This fern will grow and produce spores, sporangia and sori, and the life cycle starts over.

Ferns also reproduce by cloning themselves through underground runners, or rhizomes, in asexual reproduction.

Divide established ferns in early spring, when new growth is starting. The plant should be thoroughly watered the day before dividing.

Dig up the roots. Depending on the type, it may have a rhizome (a long, horizontal root) or a bunch of roots growing down below a crown. You can wash the roots gently with water if you wish.

If it is rhizomatous, cut the rhizomes apart. Each new piece should have at least one frond growing from it.

If it is clumping, gently pull apart the root ball into smaller clumps. You can cut the roots but cut as little as possible. Some ferns will have fronds that all come from a central plant; that plant will need to be cut in half at the top. If it’s a big fern, cut the top into quarters.

Replant the divisions immediately in a rich area, full of humus. Give it some water. Consider misting the plants every morning until they show growth.

Dorothy Dobbie is the owner of Manitoba Gardener magazine.