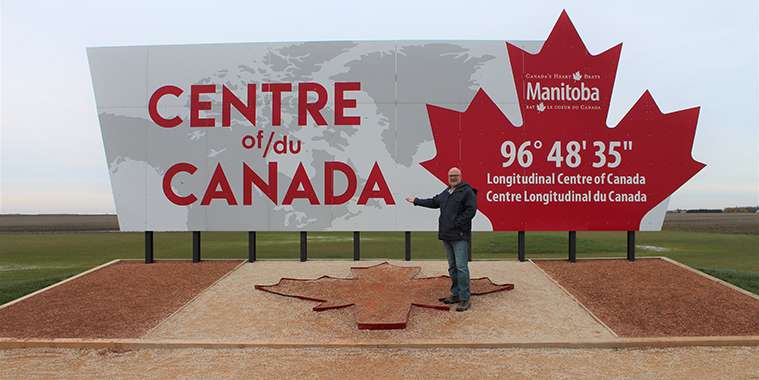 For decades, travellers along the Trans-Canada Highway east of Winnipeg were informed that they were crossing the longitudinal centre of Canada by a pair of brown, standard issue, Department of Highways signs noting the coordinates 98 degrees longitude, 48 minutes, 35 seconds. This spot, about 12 kilometres east of the city, has become a lot more interesting in recent years thanks to a pair of roadside attractions.

This stretch of the Trans-Canada from Winnipeg to the Ontario border was built in the early 1950s and it was initially quite controversial.

When the province signed onto the federal government’s Trans-Canada Highway cost-sharing agreement in 1950, it sent its planners to what most considered the natural route for the new highway. Sometimes called the Vivian Route, for one of the villages it passed through, it extended along what is now Highway 5 and connected to Rennie on Highway 44. It was the front runner because the province had already spent money on roads and tourist infrastructure in the region.

Planners also looked at an alternate line further south called the Ste. Anne Route as it passed just north of that community. They found that it would end up being a few kilometres longer than the Vivian Route but would cost $2.5 million less to build. The savings were due to having less rock formations and muskeg to deal with.

This led to the creation of the East Trans-Canada Highway Committee which claimed to have 1,000 members, mostly people who had interests along the Vivian Route. It felt that the provincial government was turning its back on the region and claimed that the cost saving numbers they produced were incorrect.

The province stuck with the Ste. Anne Route and submitted it to the federal government for funding in the spring of 1951. Construction was completed in 1956.

Centre of Canada Park is the province’s newest roadside attraction. It was officially opened in August 2017 by Lieutenant Governor Janice Filmon who planted a Regal Celebration Maple Tree on the grounds to mark the occasion.

A committee of community members spent years working on the idea of creating an attraction that would be a fun gateway to the prairies, and safer for motorists who insisted on pulling onto the shoulder of the Trans-Canada Highway to take a selfie with the “Longitudinal Centre of Canada” highway signs.

The park was designed to be added to in stages. The first stage is what you see now. It consists of a large billboard for selfies, a flower garden, picnic tables and parking area. The $30,000 cost was funded primarily by the Rural Municipality of Taché, Manitoba Tourism and the Taché Community Development Corporation.

Plans for the rest of the eight-hectare site, which will be added as fundraising permits, include a commercial building with washroom facilities, picnic area and a playground. A longer-term phase could include expanding the site up to 24 hectares with additional landscaping, walkways with interpretive plaques and a clearing for special events.

More information about the park can be found at centreofcanada.ca

If you turn west at the access road off the Trans-Canada Highway instead of east towards Centre of Canada Park, you will see what at first appears to be a secluded farmyard. Look up the driveway and you will see a sign for Pete’s Center Canada Heritage Museum.

The museum is an open-air collection of dozens of pieces of antique farm machinery and vehicles. There’s even a spot with some old pieces for sale if you think your yard could use some shabby chic metal implements.

Peter Pelland, who bought the property in 1989, said that he long wanted to see some sort of attraction to celebrate the “centre of Canada” and began working on his museum about seven years ago.

It began with landscaping the property with trees and grass and constructing hills and berms so that the equipment could be properly displayed for photographers or strollers. There’s even a man-made pond.

It took about five years to amass the collection of machinery which he has purchased from farmers, at auctions and through online classified ads.

Over the years, the site has been the scene of many wedding party photo shoots and school trips. Due to its location, it has also been visited by tourists from around the world, some of whom come to knock on Pelland’s door or send him a postcard to thank him for his work.

Pelland, whose museum is funded out of his own pocket, sees the project as “my way of giving back” and something to brighten a weary traveller’s day. He says, “For me, it was a fairly simple idea. I like to see people smile.”