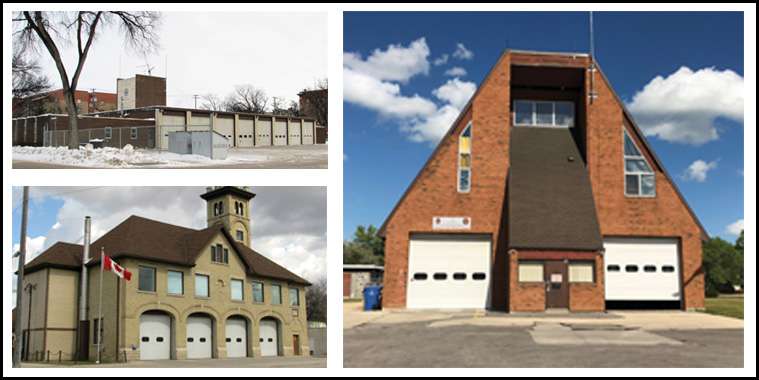 Winnipeg’s Fire Paramedic Service is hosting their annual Fire Paramedic Station Open House this Saturday, October 19, from noon to 4:00 p.m. It was to have taken place last Saturday as part of Fire Prevention Week, but postponed due to the snowstorm.

Visiting a fire paramedic station is a chance to get helpful safety information, meet the men and women who may one day save your life and an opportunity to check out these interesting and unique buildings from the inside.

Here are three stations you might want to visit.

Constructed in 1910 as Fire Hall No. 10, this is the oldest operating fire paramedic station in the city. It was designed by Scottish-Canadian brothers Alexander and William Melville who were responsible for a dozen of Winnipeg’s early fire halls. Many of these buildings are still standing, though just this one and the circa 1914 ambulance station at 624 Osborne Street are still in service.

A unique attribute of this fire hall was its large back yard. This contained the horse stables and a fire fighter training grounds that featured a 23-metre-tall tower. It was this land that saved the old building from demolition.

By the 1970s, the fire hall was out of date and in poor condition. In 1981, city council approved the construction of a new station to the rear of the building that would face Burnell Street. The old station would then be demolished.

Burnell Street residents and heritage activists urged the city to find a different solution, so it went back to the drawing board. In the end, it was decided to renovate the old hall to act as the vehicle garage and construct a new, single-storey wing at the rear to house the living quarters, dining area and communications equipment.

The old building still retains many of its original features, such as pressed tin ceilings, a fire fighters’ pole, and a functional hose drying tower.

In 1963, Winnipeg taxpayers voted in favour of spending $350,000 on a new central fire hall. The previous “number one”, which stood on the triangle of land off Albert Street where Old Market Square Park is now, opened in 1899 and for decades had been deemed too small and was in poor repair. A former Winnipeg’s fire chief said at the time that the old hall was “the most depressing place I’ve ever been in”.

Initially, the fire department wanted a location closer to the central business district, but the cost of land was prohibitive. Instead, this site on Ellen Street near Notre Dame Avenue was chosen as only 11 houses and two businesses had to be expropriated.

This was the era when the city had architects on the payroll, so it turned in-house to John Whitecross and Fred Trimble to design the building. Whitecross had previously designed the West End library branch on Ellice Avenue.

Unlike the bulky, three-storey building it replaced, the new fire hall was a sleek, single storey affair. The 1,500 square metre main floor includes eight vehicle bays, dormitories, a dining room and offices. Storage and mechanical rooms are located in the basement.

This is an interesting station to visit as it contains the city’s largest fire fighting equipment, such as aerial ladder trucks, and is home to unique vehicles like the Major Incident Response Vehicle (MIRV).

When it came time for the City of St. Boniface to construct two new fire halls in the late 1960s it turned to a familiar architect. Étienne Gaboury’s work was already well known there thanks to developments such as the St. Boniface civic centre and Precious Blood Church. In later decades, the Order of Canada recipient would design the new St. Boniface Cathedral, Royal Canadian Mint and Esplanade Riel.

As expected, Gaboury’s reimagining of a fire hall did not disappoint. This two-storey, “A” shaped building is 13.5 metres tall to allow for a hose drying tower. Though its height makes the building stand out in the landscape, the choice of brown brick and cedar shingles helped it blend into any 1960’s or 1970’s suburban setting.  (In the end, the proposed cedar shingles on the roof and over the front entrance had to be changed to asphalt ones due, ironically, to fire code regulations.)

Gaboury designed two fire halls in this style for St. Boniface that were constructed in 1969 – 1970. The other was that city’s central fire hall, now Winnipeg Fire Paramedic Station No. 3, on rue Des Meurons. The only difference between the two is that No. 3 is wide enough to accommodate three vehicle entry doors.

A further reason to visit Fire Paramedic Station No. 15 is that it might go out of service soon. In 2015, it was recommended that it be sold off and amalgamated with a new fire paramedic station to be constructed elsewhere in south east Winnipeg.