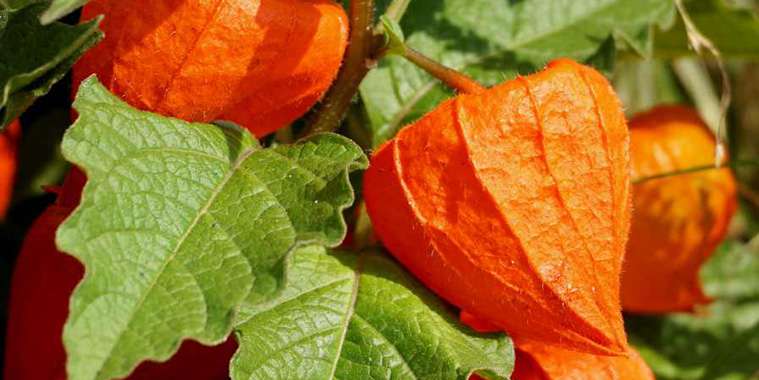 The Chinese lantern plant one of Manitoba’s lovely little secrets

One of Manitoba’s lovely little secrets is the sometimes maligned Chinese lantern plant that is a cousin to the tomatillo. You often see its relative, Physalis peruviana, featured in gourmet restaurants where it may appear as a garnish on exotic deserts or sometimes to add glamour to a main course. Dressed in a papery beige case, the little orange fruit is tangy-sweet with toothsome seeds that explode in your mouth. It turns a pretty orange with a beige husk when ripe and is used for snacks, pies and jams. People also like it in salads or as a garnish in a desert.

Originating in Peru, Physalis peruviana, a close relative of the tomatillo and the Chinese lantern, has been grown in England since the 1700s. Its orange fruit is also favoured in South Africa and New Zealand. It has a long list of names, notably among them, Peruvian ground cherry, Inca or Aztec berry, and romantically, “love in a cage” in France. You can grow them here in Manitoba. Mandy’s Greenhouse, located a mile east of Tyndal, can sell you some seeds. http://mandysgreenhouse.com/heirloom-seeds/ground-cherry/

Chinese lantern, Physalis alkekengi, the most likely grown local ground cherry, has a smaller fruit but it is still edible if ripe. It is both loved and hated by gardeners because it is a very successful spreader. It travels by underground runners and has those multitudinous seeds that easily self-sow.

It is often grown ornamentally, ripening in October for thanksgiving when the fruits and their paper cover will turn bright orange-red. It is this stage that earns them the name Chinese lantern. Make sure the fruit is ripe before your eat it. It can be toxic in its un-ripened stage.

There is another European lookalike that grows on a small shrub with sour little fruits that are often used in jams and jellies. It real name is Prunus fruiticosa.

Although not overly showy (they are pendulous), the flowers of our Chinese lantern are quite pretty, looking a little like Chinese lanterns themselves. Depending on the variety, they range in colour from white to purple. They have five petals arranged around an eye that can be yellow to dark.

Physalis is generally high in cryptoxanthin, also found in orange rind, apples (what isn’t found in apples?), egg yolks, butter, papayas, and bovine blood serum. Cryptoxanthin is converted to vitamin A (retinol) in human bodies and is being studied for its cancer prevention properties. The Chinese used Physalis to treat such things as abscesses, coughs, fevers and sore throat.

Some people believe that Physalis subglabrata or smooth ground cherry is hallucinogenic, and it is banned in Louisiana for this reason. However, like the hallucinogenic claims about morning glory seeds, these claims appear to be wildly exaggerated.

Dorothy Dobbie is the publisher of the Manitoba Gardener and has a weekly radio show on Nostalgia Radio CJNU 97.3 FM. Tune in Sundays at 8:00 A.M. or listen online.