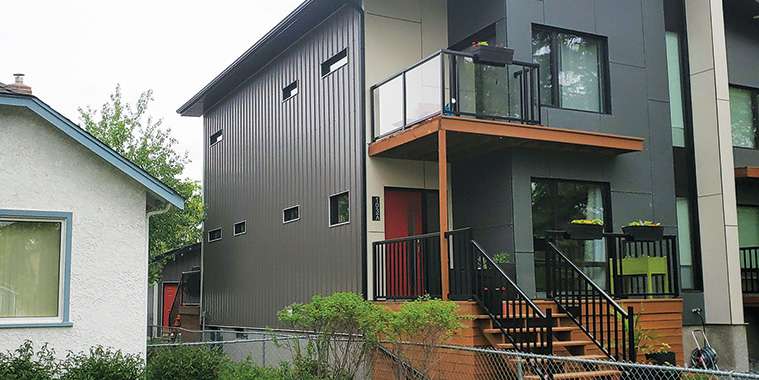 “In the eye of the beholder” is a saying that comes to mind when you dig into many of the issues surrounding infill housing this year.

This is in part why Councillor Kevin Klein has come out strongly to say the city of Winnipeg needs to create a planning commission made up of councillors, citizens and industry experts that can be more objective in justifying their decisions on development applications. Although City Council would still get the final vote.

Other Canadian cities like Calgary, and even neighbouring Brandon, have moved in this direction.

One of the expected outcomes of such a change would be to address, and hopefully eliminate or significantly reduce, the inconsistency of decisions currently made on various infill applications. More
evidence-based and factual decision-making needs to be emphasized no matter what body is hearing the applications.

WinnipegREALTORS® has always been a strong advocate of the need to renew our older housing stock to provide better housing for Winnipeggers. This is also about preventing disinvestment and decline in neighbourhoods, such as Spence and St. Matthews, where before non-profit housing initiatives — such as Housing Opportunity Partnership (HOP) made a strong commitment to renew these neighbourhoods in the late 1990s  — there was not a lot of hope for a turnaround.

Today, the average house price of homes in their respective MLS® areas have gone from around $30,000 in 1999 to $180,000 in 2019. Just think of the tax base the City of Winnipeg is able to amass and secure when neighbourhoods on a large scale can be renewed and become self-sustaining through allowing normal market forces to spur on reinvestment in mature neighbourhoods where people want to live. Winnipeggers are very concerned about the level of property taxes they pay, and this is one way of addressing that.

Most people agree — whether they are on the development end of infill or are residents living in neighbourhoods facing infill proposals — that the current process is flawed. But how do we address it? It has become obvious that more clarity, consistency and direction needs to be established to accommodate infill development within the city of Winnipeg. How are we expected to grow to a million people, as Mayor Bowman often mentions, if we do not have a proper plan in place to house the thousands of newcomers moving to our city every year? What choice are we going to give our newcomers and millennials when they go to buy a home one day? You cannot force people to buy a house they do not want and isn’t anywhere near adequate to meet today’s well-built energy-efficient homes with the modern amenities buyers desire.

There has been one positive development in all of this infill discussion and/or debate in which WinnipegREALTORS® is part of. The City of Winnipeg Residential Infill Guidelines Project Team is commencing a Technical Advisory Committee in August 2019 to advise on directions proposed for infill development with respect to design and intensification. It is clear that steps need to be taken now to move this infill strategy process along. The uncertainty and inconsistency around infill development cannot continue without hurting reinvestment in our city and preventing the replacement of older housing stock which no longer meets today’s homebuyer’s needs and expectations.

As WinnipegREALTORS® said when it joined forces with the Appraisal Institute of Canada-Manitoba at a presentation made to the Standing Policy  Committee on Property and Development in January: “From the very outset of the City of Winnipeg’s plan to develop a residential infill strategy, WinnipegREALTORS® has been on board to embrace the initiative, and effort by the City of Winnipeg and its city planners, to create a well-executed strategy which will work for Winnipeg and address issues more effectively as they arise.
This includes developing a set of well thought out and practical planning and design guidelines such as the City of Edmonton has done to create more certainty and understanding amongst all stakeholders respecting what is expected and necessary when doing a new residential infill within established neighbourhoods in Winnipeg.

“Without being too simplistic, the intent of the previous public consultations was to try and reach a better understanding of the issues involved in infill so a strategy could address them in a way that would be more in keeping with an expected standard of what would be considered good infill — if that is possible from both a residents’ and infill developers’ perspective. One common concern identified by both developers and residents was uncertainty in the approval process. Lots of different issues were discussed, including the need for design guidelines to ensure more compatibility and proper scale with the existing homes and character of the neighbourhood.”

Winnipeg has a golden opportunity — as one of the most affordable major cities in the country — to attract newcomers while retaining millennials thinking of
relocating to other cities. By putting up roadblocks to infill development, we send the wrong message and discourage renewal of our aging housing stock.

Let’s get on with removing the uncertainty surrounding infill development by coming up with a
concise and consistent set of design guidelines which will work for Winnipeg now and into the future.