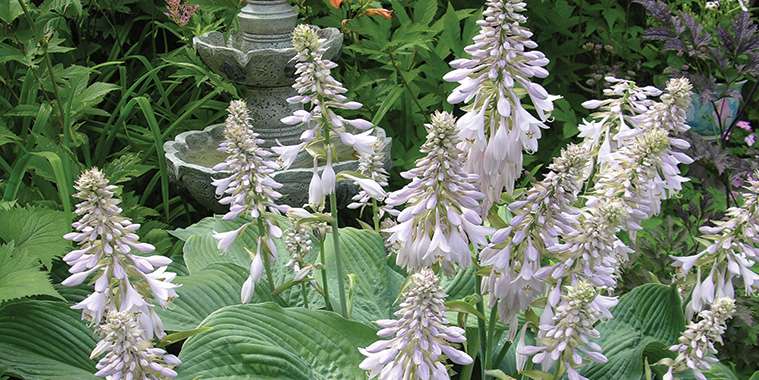 Hostas steal the show every time

Big and bold, hostas dominate the shade garden. They rescue the plantings from boredom in places where most things are reluctant to grow, places where the sun reaches only part of the day.

Hosta do best in moist shade, which is why they are not very happy planted under a spruce tree. If you are determined to have this look, then sink potted plants in the ground among the roots so you can water them individually.

Although hostas originated in China, they  came to North America via Europe and Japan, courtesy of a doctor and amateur botanist called Philipp Franz von Siebold. It was he who brought the first hostas from Japan to the notice of garden-mad Dutchmen at the height botanical discovery in mid 19th century. The plant is called Giboshi in Japanese, but it was named in Europe for an Austrian botanist named Nicholas Thomas Host.

Some people get very discouraged when it comes to growing hostas because they are so attractive to slugs. By mid-summer, those luscious leaves can look like tattered rags.

There are some things you can do to mitigate the problem. Firstly, the thick, ribbed, wax covered hosta types are the least palatable to our slimy friends. Look for “Blue Umbrellas,” “Band of Gold” or “Afterglow,” all having thick leaves.

Mulching around the plants with cocoa husks or pine needles will also discourage slugs. Broad leafed hostas appreciate the slight rise in acidity that might come from the needles. Never mulch more than a couple of inches deep to avoid infestations of voles. Keep the mulch away from the stems. The sharp pine needles discourage slugs. You can also apply diatomaceous earth to the ground around the plants to destroy slug bodies.

Cultivate the hosta bed in spring to destroy slug eggs and clean up debris where the slugs may be sleeping.

If you love scent in the garden and enjoy hosta flowers, then look for Hosta plantaginea, the most fragrant of all the hostas. It prefers sun and has gigantic, six-inch flowers that open at night and close in the morning. Uniquely, H. plantaginea will continue to grow leaves throughout the season, replacing those munched by deer. It was introduced to England from China in 1790.

This is the hosta from which all the fragrant hostas descend. One lovely hybrid called Hosta “Aphrodite,” has gorgeous, pure white, double flowers. Cool nights, warm days, plenty of sunshine and continual moisture are needed to stimulate blooming.

One downside: deer tend to enjoy fragrant hostas as much as we do.

Some people cut the flowers off as soon as they appear. If you do that, put them in a vase. They make attractive additions to bouquets or even alone as cut flowers and they last a long time.

Dorothy Dobbie is the publisher of the Manitoba Gardener and has a weekly radio show on Nostalgia Radio CJNU 97.3 FM. Tune in Sundays at 8:00 A.M. or listen online.

The Japanese not only found hostas to be decorative, they found them to be tasty. Hosta montana is the most commonly eaten but you can also try H. sieboldianii or H. plantaginea. Leaves are eaten lightly steamed and dressed with sesame oil and ginger or perhaps with vinegar or a little mirin (sweet rice wine), because they have a very mild flavor. Like most greens, they are best picked young before they develop a bitter taste.

Young hosta  leaves (H. montana or whatever hosta you’d like to try)

2. Add some sake or mirin just enough so it is easy to mix

3. Cook over low heat stirring constantly with a wooden spoon

4. It is done when it turns creamy

6. Add vinegar to thin the miso mixture and mix well with a whisk

7. Prepare mustard if you use dry one; luke-warm water makes the mustard spicier

8. Add mustard to taste to the miso mixture, and mix more with a whisk

9. Serve the cooked hosta with the dressing

They are also very good stir fried or boiled.