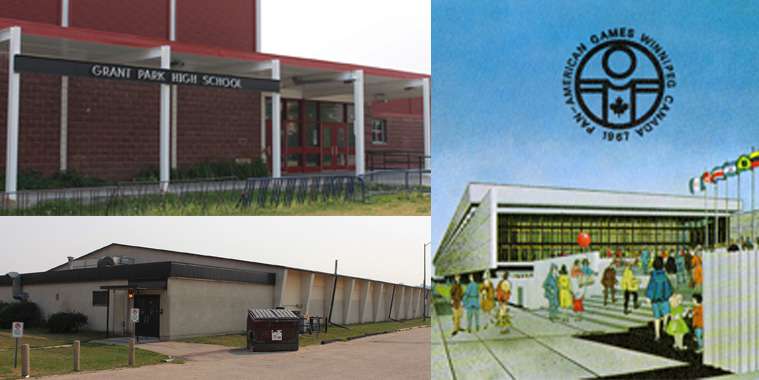 Pan Am Pool initially billed as “a mecca for Canadian swimmers”

The Grant Park subdivision was created on former railway land in the mid-1950s. As the property was divided up amongst private developers, a 53-acre site was obtained by the city between Grant and Taylor avenues for amenities. Three significant public buildings were constructed here over the next 20 years.

The Winnipeg School Division (WSD) was struggling to keep up with the baby boom generation in the late 1950s. Between the 1958-59 and 1959-60 school year, its high school enrollment alone increased by 1,200 students and was expected to do the same the following year.

A funding bylaw was passed in the October 1958 civic election that permitted the WSD to spend $3 million “for the purposes of erecting schoolhouses, furnishing and equipping the same or to enlarge existing school houses.” One of those new schools was Grant Park High School.

The school was likely designed in-house by the WSD’s design department led by architect William Enns. Raised in Greenfarm, Manitoba, Enns studied architecture at the University of Manitoba. In his 30-year career with the WSD starting in the mid-1950s he designed, or was the consulting architect for, dozens of new school buildings and expansions of existing ones.

This single-storey building was constructed with expansion in mind. Its original building was to hold about 750 students from grades 7 to 12 and consisted of 17 rooms, including a gym, art room, shops and library. The $743,150 construction contract was awarded to Arlington Builders Ltd. in January 1959 and work got underway in the spring. The school’s cornerstone was laid by trustee Margaret Trott on May 21.

Grant Park High School and its first principal, R. H. Wellwood formerly of Cecil Rhodes School, welcomed students on September 1, 1959, though a newspaper story noted: “There will be landscaping work and other finishing touches still going on when students begin classes.” The official opening took place on November 27, 1959.

In the autumn of 1962, voters narrowly approved a $1.1 million bylaw that gave the city the green light to construct Winnipeg’s first three indoor community arenas. The first sites selected were at Grant Park and the Old Exhibition grounds with Sargent Park added to the list the following year. The 2,480 square metre Grant Park Arena opened to the public in December 1963.

In March 2002, the facility was renamed for Charles “Charlie” Barbour who was hired away from Montreal in 1946 to become Winnipeg’s first director of recreation. He served in that position until his death in 1975.

Prior to Barbour’s arrival, recreation services were provided by churches, private athletic clubs and other community organizations and were spread unevenly throughout the city. Barbour’s first project was to implement a city-wide network of publicly funded community clubs that offered programming for all ages. He was also chair of the annual Junior Winter Games tournament and the inaugural president of the Greater Winnipeg Minor Hockey Association.

The city is currently exploring options for replacing this arena with a new recreational facility.

In March 1966, it was announced that Grant Park would be the site for the jewel in the crown of the 1967 Pan American Games facilities. The state-of-the-art Pan Am Pool would host the games’ swimming, diving, water polo and synchronized swimming events.

The projected cost of hosting the games began to balloon and an indoor pool, which made up about a third of the games’ budget, was in jeopardy of being scrapped in favour of an outdoor facility. In the end, a further injection of cash from the three levels of government saved it.

The building was designed by local architects Smith Carter Searle Associates and built by Pearson Construction Co. It has many elements of brutalist architecture, such as the extensive use of unfinished concrete throughout, though its front wall of glass gives it the appearance more befitting a concert hall than an aquatic facility.

Billed in its grand opening ads as a “A Mecca for Canadian Swimmers” the Pan Am Pool has a capacity for more than 1,000 swimmers and 2,400 spectators. Its tank has a moveable bulkhead to divide it into sections for competitive swimming and family swimming.

The pool, which in the end cost $2.6 million to construct, was officially opened on Friday, July 21, 1967, the day before the games began. Two thousand people packed the stands for the ceremony which included federal finance minister Mitchell Sharp, Manitoba Attorney General Sterling Lyon and Winnipeg mayor Steven Juba, pouring bottles of water from the Atlantic, Pacific and Arctic oceans into the pool from the bulkhead. This was followed by synchronized swimming and diving demonstrations.

The Pan Am Pool underwent several expansions in the 1990s leading up to the 1999 Pan American Games, which it also hosted. It reopened in January 2019 after a two-year, $3.4 million refurbishment.