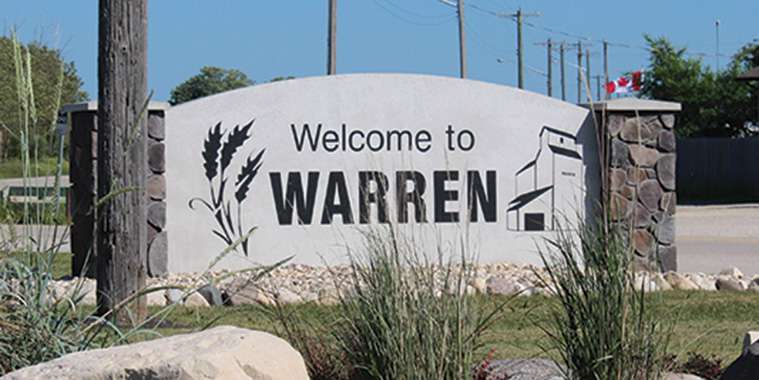 What’s in a name? The history of Warren, Manitoba

Warren, Manitoba, located 45 kilometres northwest of Winnipeg on Highway 6, is a Local Urban District in the Rural Municipality of Woodlands. Thanks to its easy access to Winnipeg and amenities such as Warren Collegiate and the South Interlake Rec Centre, it has a population of 750 and boasts a mix of older housing on densely treed streets and brand-new residential developments.

The early history of Warren provides a good example of how complicated the naming of new prairie settlements could be as its pre-railway name, the one chosen by the railway, and the one used by the post office vied for supremacy. In Warren’s case the synchronization of names took half a century.

The community nearest to where the Warren railway siding would be established was called Hanlan and saw its first settlers in the early 1880s. It was soon home to a post office and a one-room schoolhouse of the same name.

Hanlan was likely the only community in the province named for an athlete: Toronto’s Edward “Ned” Hanlan. Nicknamed “the Boy in Blue,” Hanlan was a championship rower at the peak of his career when the area was settled. He won the Canadian sculling championship in 1877 and in subsequent years took the American, English and World titles.

When the Canadian National Railway (CNR) built its Oak Point branch through the area in 1903-04 the name Hanlan was ignored in favour of Warren, which is believed to be an acknowledgement of railway employee Albert Edward Warren. In 1904, Warren was promoted from station agent at Portage la Prairie to the position of chief clerk to E. A. James, the Winnipeg-based manager of the CNR and its subsidiaries. He continued to work his way up the CNR corporate ladder and would become its Western Vice President.

It took several years for the Warren railway siding to develop into a townsite. On New Year’s Day 1907, the Hanlan post office was moved there and in 1909 its first grain elevator was built. In 1910, three area schools, including Hanlan’s, merged to become the Warren Consolidated School District and construction of a new four-room schoolhouse commenced in
September.

With the last remnants of Hanlan erased from the map, (except Hanlan Street, which still exists in Warren), the post office decided that it was time for a name change. The Stonewall Argus reported that effective April 1, 1911: “The post office heretofore called Hanlan at the Warren railway station is now called Warrenton.” It is not clear why it didn’t choose Warren, though it was likely due to competing post office names. (There was a New Warren, Saskatchewan in existence at the time.)

Warrenton didn’t sit well with residents. Another Argus story from August 31, 1915 shows that four years later they were still fighting the name change: “Residents … are determined to preserve the first name of Warren. They have petitioned against the post office name Warrenton and have had a resolution approved by the (Municipality of) Woodlands council.” The story went on to advise readers: “In addressing its citizens use the name they prefer, Warren.”

The dual names and confusion amongst outsiders as to what to call the community lasted until the mid-1950s when the post office was finally rechristened Warren.

The most prominent feature on Warren’s skyline is, of course, its remaining grain elevator. This former Manitoba Pool elevator was constructed for the Warren Co-operative Elevator Association in 1948. An annex, which doubled its capacity, was added in 1956.

Rumours began to swirl in the early 1990s that CN was set to abandon the Oak Point line. This would not only impact the viability of the elevator, but also the Prairie Dog Central vintage train that shared the track. The bad news finally came in 1996 and it was thanks to non-profit volunteer organizations that both were saved.

In the case of the rail line, the Vintage Locomotive Society Inc., operators of the Prairie Dog Central, spent three years fundraising the $1.3 million needed to buy it from CN. The old train was back in service in 1999.

The elevator closed at the end of 1999 and was slated for demolition a couple of years later. In 2003, the West Interlake Trading Company, whose mandate is to promote tourism in the region, purchased the structure.

The organization has been renovating the building and the grounds as a tourist attraction. Their office is in the elevator and they offer tours in the summer and rent out the grounds for special events.

In 2005, the Warren and District Lions Club purchased the sliver of property next to the elevator between Railway Street and the rail line on which to create a park.

Officially opened on July 23, 2008, the land is a series of parks, each with its own distinct personality.