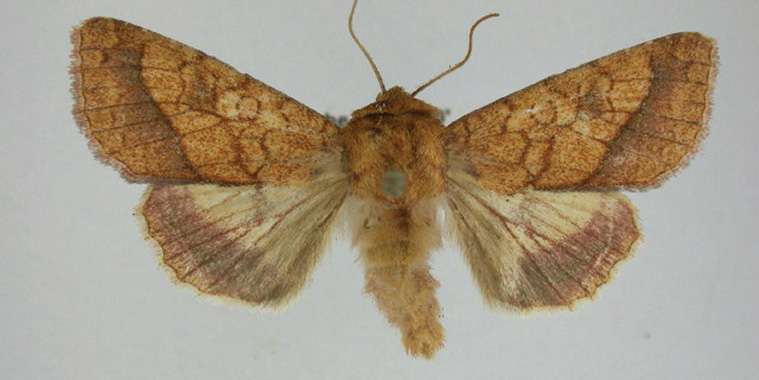 Nothing is more frustrating than waiting for roses to bloom only to find the fat buds filled with shot holes that look like someone has put a BB gun to their promising little heads.

The cause of this can be myriad, but most likely it is the rose budworm (Pyrrhia cilisca syn. adela) the little green larvae of the North American bordered sallow moth. It occurs from Newfoundland to Manitoba and south to the Carolinas and west to Texas.

The larvae of this moth feed not only on roses, but also on cabbage, alder, sumac, walnut and other plants. They are flying from May to October.

Budworm moths lay their eggs on buds and on new growth. One way to control them is to remove buds and shoots when you see evidence of the moth. Spraying the rose with Bt (Bacillus thuringiensis) is a safe and nontoxic control. Bt basically destroys the larval guts but it is not harmful to anything other than caterpillars and only when they eat the leaves of the treated plant. It does not remain in the atmosphere for long.

The rose budworm tends to feed on rugosa roses and re-blooming hybrids. Grandifloras (such as the Morden varieties) are not so much affected. Roses that are attacked will have large holes that penetrate the bud, destroying the petals. As with so many of these insects, diligence is the key to control. If you see them, a spray of soap and water (40 parts water to one part dish detergent) will knock them out on contact.

Smaller shot holes could also be caused by the rose curculio, a weevil that is only three-quarters of a centimetre (1/4 inch) long and has an extended snout. It is reddish on the back with a black underside. It feeds at night, so early risers have the best chance of controlling this pest with hand picking which is recommended as the insect produces only one generation per year. It also lays its eggs in rose hips so pick the hips in fall and destroy them to prevent over-wintering their eggs in your roses.

Japanese beetles were imported to North America from Japan in the early part of the last century. They showed up in Canada in Nova Scotia in 1939. Since then, they have spread throughout the country. Their damage is much more extensive and can be characterised by holes in the petals with ragged, chewed edges. They may eat part of the flower or the whole thing, and a rose may be attacked by more than one bug at a time. These larger, half-inch-long beetles go after about 200 plants, so think about applying milky spore to the soil around your rose bushes. It is a bacterial disease specific to Japanese beetle and some other grubs. One application can be effective for 10 years as once it is ingested, the grub dies, decomposing and reinfecting the soil for the next grub to ingest, and so on. Milky spore is not harmful to humans, animals, birds or other insects or plants. It is not approved for sale in Canada so you may have to order it from Amazon where it will be shipped to Canada. Apply it in late July, early August.

Roses also attract a range of mites, a particular aphid (Macrosiphum rosae), and potato aphids, as well as rose scale,  and rose slug sawfly, which is more of a little green caterpillar than a slug. Leaf cutting bees can also disfigure foliage but don’t destroy blooms.

Aphids appear at the first flush during bud stage and can be controlled with a garden hose to knock them off the plant. If they persist, you can add some insecticidal soap to take care of the infestation.

Alternatively, one teaspoon of rubbing alcohol to one gallon of water will also accomplish the task.

Rose scales will appear as small red bumps on the plant stems. Inside the waxy coating are tiny insects that suck the juices from the plant. Use a root drench of Cygon2-E to deal with them.

Rose slug sawflies can defoliate a rose in no time, sucking the essence of the leaves from their undersides. Try spraying the underside of leaves in early spring with horticultural oil to smother the eggs.

The slugs turns leaves into lace, starting with brown patch4s and then round holes on the foliage. The rose should recover but the interim in very unsightly.

Leaf cutter bees also go after foliage, their holes and like to be at the margins of the leaf and just look as if some animal has taken a large bite. This is a solitary bee that does not store honey but is an efficient pollinator.