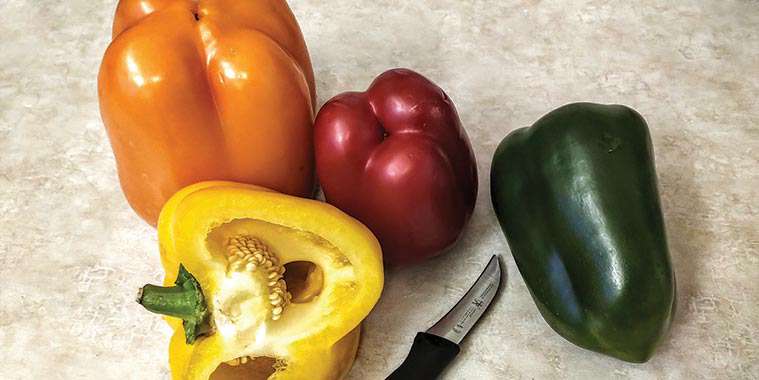 What to know when growing peppers this summer

It was Columbus, on his voyage around the world, who introduced capsicums (from the nightshade family — Solanaceae — related to potatoes and tomatoes) to the western world. He called them “peppers” because of the heat generated by the Chile pepper. He didn’t know that black pepper (Piper nigrum) is a totally different species, native to South India.

There are dozens of pepper varieties to choose from, but popular right now are dwarf varieties that are well suited as ornamental additions to containers. Most of these are of the “hot” variety.

The sweet bell peppers that everyone loves also benefit from being potted. A bell pepper will reach 120 cm (four feet) tall by 90 cm (three feet) wide, so choose a large (five gallon or more) container with good drainage. If you have a half wine barrel, you can easily accommodate three plants.

Peppers are related to tomatoes and need the same consistent watering and warm conditions. They are susceptible to blossom end rot, caused by inconsistent watering which induces a lack of calcium in the blossom. They do best when nighttime temperatures are above 10 C. They do not appreciate long stretches of very hot weather above 29 degrees C. Because of this, choose a site that gets the morning sun but a little mid-afternoon sun or at least some dappled shade.

Just as with tomatoes, too much heat can cause fruit distortion.

Harvest when the pepper reaches full size. The colour of bell peppers comes from their degree of ripeness, with red being the ripest. There is a green pepper variety, ‘Permagreen,’ that has been bred to stay green even when fully ripened. Orange and yellow bell peppers are hybrids that start out green and turn colour when ripe. Purple peppers will turn red if left on the vine more than seven to 10 days once they start to change colour. Coloured peppers can be harvested when green and most will ripen to the desired colour (although vine-ripened is best). They will become sweeter as they ripen.

‘Satsuma’ hybrid is an orange bell pepper that matures in 75 days and is a nice, sweetly crisp, heavy-walled pepper.

‘Early Prolific Hybrid’ is a bright green and matures in just 55 days.

If you like hot peppers, there are a number of options, including jalapeno, banana and chili hybrids that all do well in containers.

Peppers contain only 40 calories per cup and are high in vitamins A, B6, C, potassium and folic acid.

The hot members of the family contain an ingredient call capsaicin which is said to kill pain when applied to the skin. It has been used to treat everything from shingles to fibromyalgia, neuropathy and neuralgia. Another use has been for stomach pain and diarrhea.

While bell peppers do not contain as much capsaicin, they do have enough of the thermogenic ingredient to work internally to increase your
metabolism. This makes them a good choice for dieters.

Don’t save seeds form green peppers — they are not yet mature. Wait for the peppers to turn their final colour. Look for heirloom varieties or those that are open pollinated.

Dorothy Dobbie is the publisher of Manitoba Gardener magazine. She also broadcasts a weekly show from CJNU 93.7, Nostalgia Radio, every Sunday morning at 8:00 a.m. Subscriptions to Manitoba
Gardener can be obtained online at localgardener.net or call 204-940-2700.