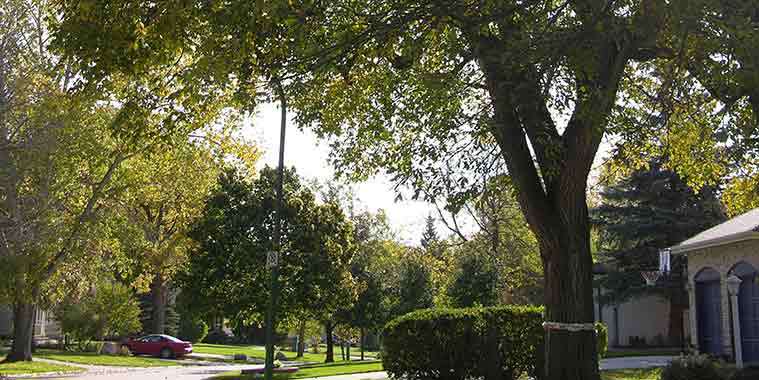 The importance of caring for your trees

When you carve your initials at eye level into a ten-year-old tree, do the initials grow up higher with the tree or stay at the eye level?

Your eye level may change over that time, but the height at which you carved your initials doesn’t. That’s because of apical meristems, which promote growth only at the tips of the branches and the roots.

There are six layers in wood.

1. Outer bark. The outer layer is bark and it is designed to protect the tree from such things as temperature, insect and fungi. Bark can be as thick as one foot in Douglas fir to very thin such as that found in birch trees. Bark is formed by specialized meristems sometimes called phellem.

2. The phloem.  Also called the “bast”, this fibrous material layer is responsible for taking the sugar rich products manufactured in the leaves through photosynthesis to all parts of the tree.

3. The Cambium. These are the meristem cells, which produce phloem on one side and sapwood on the other.

4. Sapwood. The other name is xylem and this is the layer that draws water and minerals from the soil to the leaves.

5. Heartwood. This is the dead part of the tree that provides a sturdy central core to provide structure and strength to the tree.

6. Pith.  The very center of the tree made up of cells also called medulla made up of parenchyma cells and air spaces. These cells do a little of everything, from storing water to assisting with the transport of water and sugars from the xylem and the phloem layers.

We often overlook what’s going on beneath earth because it isn’t immediately visible. But there is as much or more happening down there as up here in the ether.

Large, strong anchor roots grow to stabilize the tree and, in a few cases depending on soil conditions, tap roots can go deep into the earth to search out moisture and minerals. Most trees lose their tap roots after the seedling stage, however.

The vast network of roots resides in the top eight to 10 inches of soil. This is where water and oxygen are most abundant. Fine, hair-like feeder roots will reach upwards to within the top couple of inches to receive air and water. The roots can stretch three to four times as far as the canopy would reach if you laid the tree on its side.  In a forest these roots mingle with those of their neighbours, sometimes sharing food though the mycorrhizae, the symbiotic fungi that attach to roots in a relationship that is mutually beneficial. The tree delivers carbons to the fungus which in turn delivers minerals and water to the tree.

Because the feeder roots grow so close to the surface, the tree can be negatively affected by something as simple as adding a few inches of soil on the surface over where the roots exist.  Some trees, such as oak, are more sensitive than others, and show decline when you try to build a garden under them. Others, such as walnut, produce toxic substances in their roots to keep competition away.

Most people believe that tree roots maliciously seek out their sewer pipes to invade them but in actual fact, the sewer pipe is probably leaking and enticing the roots to come and feast on all that passes through. Some people recommend flushing two pounds of rock salt down the toilet, but this is hard on your lines. A better preventative is periodically, twice a year or so, to flush a half cup of copper sulfate down the toilet. This will kill any invading roots on contact without damaging the tree.

In cityscapes, trees often have to compete with alien plants plus compaction caused by nearby traffic, plus root growth limited by obstructions such as house foundations,. Birch particularly resent this.  In addition, we insist on growing grass to compete with their feeder roots, then add insult to injury by raking up their leaves in fall so that the nutrient they would expect to have returned to them in the wild are taken away in the name of tidiness.

The least we can do to mitigate all this trauma is to know what conditions please them, water them frequently, prune away any dead of injured branches and add a little fertilizer from time to time.

Dorothy Dobbie is the publisher of Manitoba Gardener magazine. She is also past chair of Tree Canada. Visit localgardener.net for more information about trees and consider buying a subscription to the Manitoba Gardener. 204-940-2700.