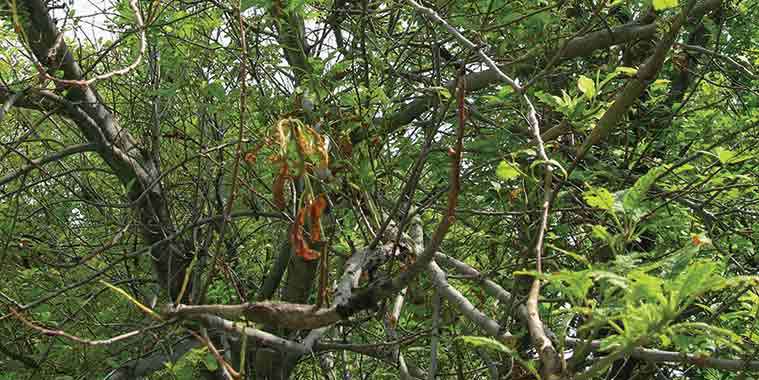 Black knot is an air-borne fungal disease of trees of the rose family. That includes plum, apricot, cherry trees, Mayday trees and chokecherries. It will even invade cotoneaster. It can run rampant in certain years among wild trees and shrubs, making it hard to control in city gardens. It thrives in rainy years. The best control is through pruning.

One of the first of these fabulous displays is put on by the forsythia, which unfurls bright yellow flowers along yellowish stems long before it bothers to show its leaves. For those who live in Manitoba, there is a hardy variety (zone 3) called Northern Gold which grows to over eight feet. It flowers right to the tips of its branches. This is a shrub well worth planting in a sheltered location for the best display. After flowering, pleasing medium-green leaves emerge.

In late May, early June, the snowball viburnum covers itself in white pompoms and the Bridalwreath spirea will then be dressed in lacy white, while the mock orange vies for attention with its heady scent. The ornamental plum is fancy in pink.

But of all the flowering woody plants in my back yard, my favourite was the old chokecherry (Prunus virginiana). When we moved to this house in “Charleswood, it was riddled with black knot and was missing some of its stems due to the disease. In spite of this, it found the strength to put out a miraculous crop of flowers that later turned into glistening black fruit to tempt the songbirds and turn the robins tipsy in late summer.

As for the black knot, it is slowly and surely killed the tree. Before it died, it put out one last stunning display of flowers and perfumed the air for weeks. That year, the robins became almost alcoholic on its fast ripening fruit. Then, to our sorrow, it died.

Black knot is caused by the fungus, Dibotryon morbosum. It overwinters in knots on twigs and branches or in the infected wood immediately surrounding them. In the spring, the fungus produces spores in sacs contained within tiny fruiting bodies on the surface of the knots which can infect other parts of the tree if conditions are right. Only succulent green twigs of the current season’s growth are susceptible to infection.

The fungus causes the plant to produce tumor-like growths – knots – that may become visible by the late summer of the year of infection but often are not noticed until the following spring. The knots will elongate several inches each year and eventually girdle affected twigs and branches, causing ugly gaping wounds along the infected branches.

Control is through pruning and it is important to prune at least two to four inches (five to10 cm) below each knot because the fungus grows beyond the edge of the knot itself. Fungicides can offer significant protection against black knot, providing the greatest benefit if applied before rainy periods, particularly when temperatures are greater than 13 degrees C (55 degrees F).

Black knot was everywhere when the old chokecherry died, but I wanted to replace its heady perfume and the spreading branches, so I chose an Amur chokecherry (Prunus maackii).

Beloved by gardeners for its papery, but glowing, cinnamon-coloured bark and its long clusters of tiny white flowers in spring that become glossy black cherries to beguile the robins in summer, Amur chokecherry grows 30 feet tall with a spread of up to 25 feet. It can be single or multi-stemmed, depending on our preference and pruning skills. But best of all, it is not as susceptible to black knot disease (although it can get it) and it is non-suckering, a boon for the shade garden beneath the tree.

It has been 10 years since we planted it and there is no sign black knot, although it still doesn’t reward us with as much scent as did its predecessor. It is a lovely tree, for all that, and it is better suited to a Winnipeg garden.

By the way, if you’re buying a suckering tree, check the pot the nurseryman sells it in. If it has suckers showing, leave it. Properly prepared trees have their suckers trimmed back and sealed with white latex paint before sale.

If you have already purchased your tree with suckers, you can do the same thing by exposing the sucker to its base beneath the soil, cutting it back and sealing the wound. Nail polish works as a sealant.

Dorothy Dobbie is the publisher of Manitoba Gardener magazine. Call 204 940 2700 for subscriptions or go to localgardenr.net