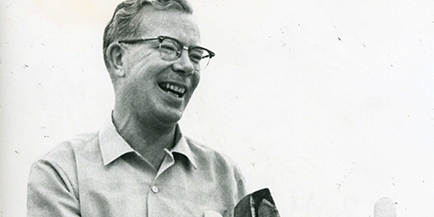 The region north east of Winnipeg is one of great natural beauty, though two of its most prominent natural spaces were heavily shaped by human hands.

On October 22, 1954, Manitoba’s Natural Resources minister Charles Greenlay announced the creation of the Agassiz Forest Reserve, the province’s ninth, (their names were changed to “Provincial Forests” in 1964.)

The 795-square kilometre tract stretches from south of Lac du Bonnet to just north of the Greater Winnipeg Water District Railway line. The land was described by the province at the time as mostly plains that had been homesteaded or farmed at one time but abandoned.

The primary role of forest reserves was to allow for the proper management of the harvesting of trees to ensure a perpetual supply of timber for Manitoba. At the time, the province planted over a million saplings per year in its reserves. Agassiz got about 300,000 trees per year for its first few years to get the harvest started.

The most unique feature in Agassiz’s midst was the U. S. Air Force radar base that was established in 1953. It was taken over by the Royal Canadian Air Force in 1961 and eventually rechristened Canadian Forces Station Beausejour. The facility attracted the military, cadets and scouts for winter and survival training camps.

When the station closed in 1986 it was converted into the Manitoba Regional Correctional Centre, later renamed the Milner Ridge Correctional Centre, which is a minimum, medium and maximum security facility with a capacity of 524 inmates. Many of the original military structures remain on the site.

Cross country skiing is a popular winter activity in the forest. The Lac du Bonnet Cross Country Ski Club maintains around 12 kilometres of trails that can be accessed off Provincial Trunk Highway 317.

The forest was named after glacial Lake Agassiz which once covered the area. The lake, in turn, was named in honour of Louis Agassiz, a Swiss-American biologist and geologist who had never visited the region.

Today, Agassiz is one of 15 provincial forests that cover 22,000 square kilometres of land.

Birds Hill Provincial Park was created in 1964 by the Duff Roblin government. It was one of three new provincial parks that would be built to celebrate Canada’s centennial. The others were Assessipi and Spruce Woods.

The location, just 15 minutes from Winnipeg, was thought to be a perfect spot for a new nature reserve and recreational area for city dwellers as other options, such as Grand Beach Provincial Park, had become less accessible due to the discontinuation of train service.

The timeline for the park’s development was tight as it had to be completed by July 1, 1967 in order to qualify for grants from the federal government’s centennial program. The province added extra pressure when it announced that the new park would be the site of the steeplechase and cross-country equestrian events for the 1967 Pan Am Games.

The province committed $1 million towards park development in their 1964 budget. Much of that was earmarked to acquire the 34 square kilometers of land it needed for the project. Because of the time line there were no drawn-out land negotiations. Most of the 60 or so landowners effected simply got an expropriation notice in the mail accompanied by a compensation cheque.

One of those landowners was Mollie Ives of St. Vital. She had bought a 57-hectare parcel the previous year and the province expropriated 32 of them leaving the rest of the land inaccessible.

Ives found that there was no appeal mechanism, so her only option to fight what she saw as a flawed expropriation process was to take the province to court. The case wound its way through the legal system for nearly six years. In February 1970, Ives, who was not a lawyer, became the first woman to successfully plead her own case before the Supreme Court of Canada.

For her efforts, Ives received an extra $10,000 in compensation and the province’s expropriation process was declared illegal.

Despite the legal action, work on Birds Hill Park continued. The first steps were to clear way 1,500 truck loads of car bodies and other large items, dismantle 50 kilometres of fencing and auction off 70 buildings of various sizes for removal.

Construction of the park was overseen by Gary Schnepf, the province’s senior park planner who was just 26 years old when work began. This included the creation of a 32-hectare artificial lake, a beach, a 500-spot camping area and various sports fields. A 16-kilometre long inner roadway connected the sites. Many of the park’s permanent buildings and nature trails were added later that decade.

Birds Hill Park was officially opened on July 15, 1967 by Premier Duff Roblin and Sterling Lyon, the provincial Minister of Tourism. They cut the ceremonial rope ribbon with a broad axe dating to the time when the area was first settled. Roblin returned five days later with Prince Phillip in tow to visit an international Boy Scout camp out.

The park’s most famous event, the Winnipeg Folk Festival, first took place August 9 to 11, 1974. Around 20,000 music fans attended the free event to watch the lineup of 50 musicians. Today, the festival attracts more than 70,000 people annually.

The name “Birds Hill Park” was just the working name for the project because of the nearby community. The decision was made to keep it as Dr. James Bird, after whose family Birds Hill was named, was the first speaker of the Manitoba legislature. A fitting name for a provincial park.