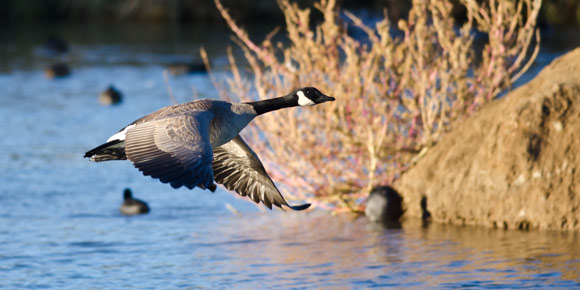 Canada goose getting ready to

Canada geese eat mainly vegetation, both aquatic and land based, but they enjoy the odd juicy bug.

Their droppings average about 5.5 ounces per day (wet) and are generally disease free. If you live on one of Winnipeg’s many man-made lakes, you may be fed up with these daily deposits and just decide to take a pot shot at them some sunny morning, bagging dinner at the same time. Don’t. Illogically, it is legal to kill a goose if it is doing damage, but it is not legal to eat the kill. You can get a license to kill them for food, however. (Only in Canada, right?)

Speaking of eating, Canada geese were once considered delicious when tastes ran to high fat foods that helped keep us warm in winter. Some people now scorn the flavour, but others love it, saying the meat is more like beef than chicken; for others, it’s more like dark turkey meat or duck. Giant Canada geese weigh in at about eight pounds and much of that is fat, especially in fall. This heavy adipose layer helps them in their migration south each winter.

The Canada goose generally lives between 10 and 24 years. The oldest recorded was 30 years plus a couple of months.

A very vocal bird, Canada geese have at least 13 different sounds, ranging from low clucks and murmurs, which they communicate while feeding, to wild, loud, greeting and alarm calls. The female has the lower voice. While still inside the egg, the gosling is able to communicate with its mother if it’s distressed or even just content.

When it comes to nesting, the female chooses the site and builds her nest of twigs, leaves, grass, and moss near water. Once perched on top of her eggs, she has a clear view all around, being able to spot any potential predators approaching. While she knows how to defend herself and hubby will certainly come to her rescue, the goslings are vulnerable to snapping turtles, owls and hawks, which find the young goslings delicious. Raccoons and bears also hunt out nests and make a meal of un-hatched eggs.

While the male goose doesn’t sit on the nest during incubation, he stays very close by to protect his love from intruders. If he senses danger, he will spread his large wings and hiss in an effort to scare off any likely predator. That can be formidable. Wingspans can vary dramatically from 90 to 200 cm (three to six and a half feet). One curious fact is that the male and female of each subspecies look the same.

Goslings can walk, swim and find their own food immediately after hatching. The young are frequently taken for walks – often stopping traffic and creating accidents. But did you know that at this time of year, neither the parents nor the young can fly?

Coinciding with when their eggs hatch, mom and dad are moulting, losing their flight feathers. They don’t get them back until the young are ready to take to the air.

If you approach a goose with goslings, be prepared to be accosted by much flapping of wings, hissing and running attacks that can include bites and pecks.

Canada geese, Branta Canadensis, are majestic birds. They are among the most populous of all water birds in North America.

Dorothy Dobbie is the publisher of Manitoba Gardener magazine, this year celebrating 20 years! She hosts a weekly radio show on gardening every Sunday morning at  8:00 on CJNU 97.3 FM