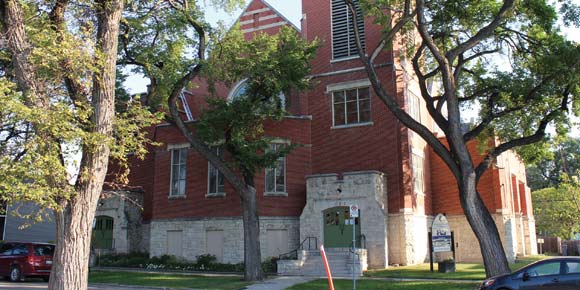 Glenelm originally touted for its natural setting along the river

The Glenelm neighbourhood of Winnipeg, part of Elmwood, is nestled between Henderson Highway to the east and the Red River to the west.

The neighbourhood was established after the City of Winnipeg announced it would build a new bridge to Elmwood across the Red River at Redwood Avenue. The major land owner on the east side of the proposed link, William Hespeler, agreed to give up his portion of the property required for the right-of-way to join the bridge to Henderson Highway if the city could get the other 40 or so smaller landowners to do the same.

The city got the land it needed and many of those landowners sold all or part of their now much more valuable property to land companies. A consortium of five developers jointly marketed the “Glenwood Crescent” suburb as the “Fort Rouge of North Winnipeg”. They touted the natural setting along the river, its proximity to St. John’s Park across the river and the eventual streetcar line that would take residents downtown in a matter of minutes.

Some of the hundreds of lots were sold but it wasn’t until 1911, after city infrastructure such as sidewalks and sewer lines were added, that the residential building boom began.

In May 1929, the Winnipeg School Board announced the construction of an eight-room school nestled in the maturing residential neighbourhood of Glenelm.

The decision was spurred by the fact that Kelvin Street, which had recently been renamed Henderson Highway, was about to be expanded and paved. This would make it an even more dangerous thoroughfare for area children to have to cross to get to the area’s only school, Lord Selkirk School on Brazier Street.

The $80,000 Glenelm School was designed by local architects Northwood and Chivers. Their other projects at the time included the pavilion in Assiniboine Park and the Winnipeg Auditorium on Vaughan Street.

The design is considered a form of Collegiate Gothic, a style popular for schools at the time. It is built of red brick with generous Tyndall stone trim, especially around the entrance and quoins.

The school originally hosted just kindergarten to grade four classes. After that, children had to go to Lord Selkirk School.

A visitor to the school might notice that the name carved in the stone above the entrance reads “Glenwood School.” That was the building’s original name.

In April 1948, the Lord Selkirk Home and School Association wrote to the school board requesting that the name be changed. (It is assumed that this was done to end the confusion between Elmwood’s Glenwood School and the one in St. Vital.) The group presented the board with three possible options: Glenelm, Glencrest or Edgar Argue, the name of a former principal at Lord Selkirk School.

A major expansion of Glenelm School took place in 1997 – 1998 which added a gymnasium, library and computer lab.

The Elmwood Presbyterian Church was organized in March 1904. It had just nineteen members and worshipped at a church on Henderson Highway at Riverton Avenue.

When their old church became too small, the congregation purchased this land on Cobourg Avenue and in 1913 hired architect George Gaspar Teeter to design a new building. It was at this time that the name of the church was changed to King Memorial.

Initially, just the basement level of the new building was constructed. This was where the congregation worshipped until they felt they had enough money and had grown large enough warrant building the rest of the church.

The main floor of the church can hold 750 people with another 200 on the balcony level. The basement was renovated into a hall that could hold around 700 people and included a gymnasium with basketball court. There were up to 25 rooms around the church that could be used as classrooms for its popular Sunday School program or for community meetings.

The dedication and first service at the new church took place on October 2, 1927 with its minister, Rev. E. G. D. Freeman, presiding.

The crowning feature of the church’s interior was added a year later. The $8,500 pipe organ by Casavant Frères of Saint-Hyacinthe, Quebec was the first church organ in the city with a 32-note pedal and one of just three that were electric. It was dedicated on October 29th, 1928.

The church is named for John Mark King. A United Church cleric and scholar, he came to Winnipeg in 1883 to be the first principal of Manitoba College, a forerunner to the University of Winnipeg. Well respected, even revered, the city was shocked when King died in 1899 of influenza. John M King School in the West End is also named for him.

The “Gordon” was added in 1967 when King Memorial and Gordon United Church on Poplar Avenue merged. Andrew Gordon was a United Church Minister who died in 1922.