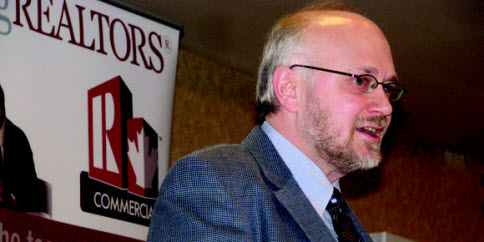 Will Dunning, the chief economist of Mortgage Professionals Canada (MPC), to be the keynote speaker at the WinnipegREALTORS® annual forecast breakfast on February 7.

Dunning possesses an extensive knowledge about how real estate markets are affected by mortgage regulations and interest rate changes.  As a former Canada Mortgage and Housing Corporation (CMHC) market analyst and a housing analyst since 1982, Dunning has gained insight in the workings of the housing market.

The national media has been filing many reports on the new stress test that came into effect on January 1 this year  for uninsured mortgages — ones with more than a 20 per cent down payment. The media has reported on increased sales activity in December, attributing it to some buyers having advanced their home purchases to maximize their allowed mortgage limit without a stress test being in place.

“The new ‘stress test’ introduced by Finance Minister Bill Morneau, piles onto the one previously applied only to mortgages for home buyers with less than a 20 per cent down payment,” said CREA’s chief economist Gregory Klump. “Now stress tests will apply to all home buyers regardless of the size of their down payment relative to the size of the mortgage.”

In CREA’s year-end national market release, Klump claimed that part of the 4.1 per cent increase in December sales was due to “potential pull-forward demand before the new mortgage regulations came into effect this year.”

He was right to say potential, as it is very difficult to pinpoint exactly what motivated buyers to purchase in December without a direct questionnaire and an objective analysis being undertaken.

For example, in the WinnipegREALTORS® market region, where MLS® sales were up nearly three per cent over December 2016, residential-detached, the most expensive property type, actually had a decrease in sales of eight per cent. This is the property type one would expect would have improved sales, since the new stress test is geared to the move-up market and buyers who are more likely to want to stretch their mortgage to afford a more expensive home.

Therefore, such home buyers would be expected to act before the new stress test came into effect in order to avoid seeing their mortgage qualification limit lowered by the new requirement to meet an additional two percentage points on their contracted mortgage rate.

Interestingly enough, condo sales were up 16 per cent in December, so it is possible some of those sales may have been motivated by the new stress test.

The average December condo sale price may well bear this out, since the annual average price increase went up from four per cent to 10 per cent in December ($235,267 to $258,043).

Another way to examine the potential impact of the new mortgage regulation is to observe the price range sales activity in condominiums. Were there more upper end condo sales in December 2017 in comparison to the previous December? In the former case, there were five sales over $500,000, including one for $1.423 million. In December 2016, there were only two sales for over $500,000, with the highest being $665,650.

It is entirely possible a few of the buyers in December were wanting to make sure that the new stress test did not lower their ability to qualify for the higher-end condo they were set on purchasing.

Another point is that there are lenders in Manitoba, such as credit unions, which do not fall under the new stress test rule. The stress test only applies to federally-regulated banks. A number of buyers may not have felt compelled to advance their purchase decision at the end of the year, since they knew that alternative lenders were available.

Essentially, the new stress test, which was not announced until October 2017, had nothing to do with the Winnipeg market region enjoying a strong move-up market throughout the entire year. Clear evidence of this were the more than $1-million-plus sales occurring in both residential-detached and condo properties when compared to 2016.

It will be interesting to hear Dunning discuss how the new mortgage regulations and interest rate increases will effect market activity in Canada’s various housing markets. As a starting point, it’s a well known fact that all housing markets are local and vary considerably across the nation.