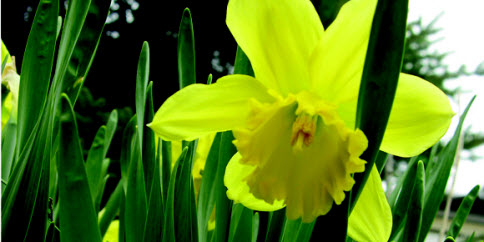 Fall is the time to think about putting in your tulips and daffodils for next year. You will appreciate their cheery arrival in spring.

General planting time is from late September to early November, but you can plant bulbs until the snow flies, as the ground will be warm enough under the surface to stimulate a root growth and get the bulbs through the winter.

Be sure to check the blooming times on the packages and get a variety of early, mid- and late-blooming spring bulbs so that you’ll have a good display right from late April to the end of June. The early bulbs can be vulnerable in Manitoba, because their eagerness to emerge in early spring can expose leaf tips to frostbite and even damage blossoms. However, tulips emerging too early can retract their blooms to a certain extent and you can always cover them in harsh springs.

Species tulips are a good bet, because they are hardy and will increase overtime. Species tulips are those tulips that have not been hybridised. They are shorter than the big Darwins, since they vary in height from four inches to 16 inches and often grow in clumps.

Tulipa biflora reaches only five inches tall, but has pretty, red-edged foliage and each stem bears three white flowers with large yellow centres. The emerging blossoms are pink on the outside of the petals.

Tulipa tarda is a favourite locally, as its yellow and white blossoms put on a brilliant display.

The Darwins, the big showy tulips, which produce a single six-inch blossom on a very tall stem (some as tall at 34 inches), and other hybrids often don't blossom a second year in this climate, but they’re worth planting as annuals. Plant them a bit deeper than recommended on the package, and don’t cut back foliage until it’s completely yellow after blooming to try to get a second year. Fertilize the bulbs by placing bone meal in the planting hole.

Don’t forget to plant a few hyacinths. Choose a protected place where there is heavy snow cover. Rated zone 4, their heavenly scent makes them worth the risk in our zone 3 climate. I have some that have been coming back for years. You can mulch them to improve the chances of over-wintering and plant them a bit deeper than the recommended four to six inches.

The little blue muscari, or grape hyacinths, are a perfect foil for yellow daffodils. These small bulbs produce clusters of small bell-shaped flowers on six-inch stems. They bloom about the same time as daffodils, and their brilliant blue flowers make a great contrast against the patches of yellow. They are very hardy and will readily increase so that you can have a carpet of blue, if you like.

Speaking of daffodils: Is there anything lovelier in early spring than a “host of golden daffodils” to quote Wordsworth? Squirrels don’t like them and neither do rabbits or deer, but the human heart gladdens at the sight of their sunny blooms. There are many hybrids in many colours, from white to pink to peach and orange and combinations thereof, but the traditional yellow trumpet is the most hardy and reliable. The gold standard is King Alfred, introduced in 1988 by John Kendall, but you are most likely getting a later improvement when you buy the bulb under this name today.

They will multiply and last for years and years.

Allium, also rated zone 4, is deer-, rabbit- and squirrel-proof. Allium sends up globe-like blooms in late spring to early summer, producing a striking seed head that is worth leaving intact. For lasting colour and a surprise effect, one enterprising and creative local gardener painted the seed heads purple!

Finally, don’t forget to plant some crocus. They come up very early, often while there is still some snow on the ground, to capture the first rays of sun with their parabolic petals and bright yellow centres. It can be 10°C warmer at the centre of the crocus than the air outside it.

If you have bulb-digging squirrels in your yard, you can deter them by laying some chicken wire just under the surface of the earth where your tulips are planted.