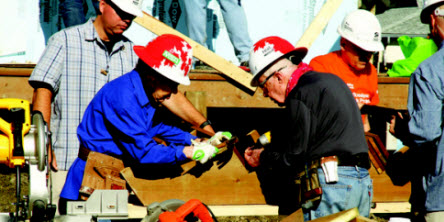 What a week! It was more than two years in the making and had a cast of thousands to carry it out.

The Jimmy and Rosalynn Carter Work Project kicked off with opening ceremonies on Sunday, July 9, and ended with closing ceremonies at the Canadian Museum for Human Rights on Friday, July 14. In between, we had a bit of everything: very hot on Monday and Friday afternoons; the coolest, wettest July day in a very long time on Wednesday; 400 to 600 exuberant volunteers each day; and transformation of the site from five platforms and 15 foundations, with their main floor poking out of the ground to 20 homes ready for the trades to install electrical, mechanical and plumbing systems.

There are five more homes to be built, one at the Lyle site where the registration tent was located, plus two each in Portage and Brandon, to round out our commitment of 25 homes.

On Thursday, the former U.S. President and his wife, Rosalynn Carter, arrived at the site to a great cheer and standing ovation. Carter delivered a wonderful devotional, speaking for more than 15 minutes without a note. In a clear strong voice, he reminded the 600-plus in attendance why he and Rosalynn have worked for so long with Habitat, thanked them for their contribution and encouraged them to continue to help those in need. Later that morning, he suffered from dizziness and was taken to St. Boniface Hospital for tests and observation.

To the great relief of people around the world, but most particularly those on the Lyle Street build site, he returned on Friday morning to say hello. After lunch, he took part in media interviews and pictures with the Habitat families and volunteers.

The Carters closed out the week with delightful individual speeches at the closing ceremonies prior to the traditional passing of the hammer to the South Bend, Indiana Affiliate, which will sponsor the 35th and last Jimmy and Rosalynn Carter Work Project.

Scott McGillivray, of HGTV fame, acted as MC for the opening ceremonies on Sunday and was on the build site on Monday and Tuesday, working on two homes, while graciously agreeing to be photographed with all who asked.

But, what does it all mean? When you get past the glamour and hoopla, what, of substance, was accomplished? Actually, a great deal including:

•         The coming together of community in a manner that is unmatched. More than 1,600 volunteers participated in Winnipeg, part of more than 25,000 volunteers across Canada. The national objective was to build 150 homes in partnership with the Carters to mark Canada’s 150th anniversary, but the response was so strong that more than 200 homes are underway.

•         The 25 homes in Manitoba will house more than 65 children. Studies conducted by independent professional organizations have demonstrated that children growing up in a Habitat home are far more likely to achieve post-secondary education than children in same economic bracket, but not in the program.

•         In addition, Habitat families are healthier, more connected to the community, less stressed, less likely to require social assistance or food banks and the parents are more likely to upgrade their skills than families in the same economic bracket.

•         The Manitoba homes will generate $40 million in community benefit over the next 50 years and the national number is a staggering $300 million plus.

•         The Carters presence generated massive community interest and support, bringing the affordable housing crisis in Manitoba and Canada to the attention of people across the spectrum of society.

Every Habitat home that we build is analogous to a rock hitting the surface of the water — the initial splash is the life-changing event for the family, while the ripples that flow from that splash are the various levels of benefit to society.

We take this opportunity to thank everyone who gave of his or her time, money or materials to make this project so successful. We could not do what we do without you.

(Sandy Hopkins is the CEO of Habitat for Humanity Manitoba.)