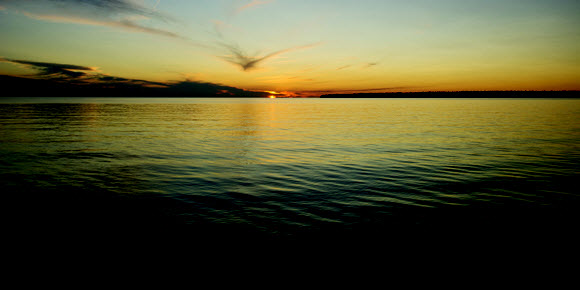 “Cottage Country” in Manitoba was the creation of farsighted entrepreneurs during the golden age of the railways in the province. For the many who now enjoy a trip to the “lake,” it was railroaders  who, at the turn of the 20th century, first conceived of establishing summer resorts along the shores of Lake Winnipeg.

While the resorts they created were self-serving as money generators for their particular railways, they hit upon a trend that has carried over to the present, with Manitobans seeking out their own piece of lakeside paradise for a summer idyll. According to the just released 2017 Royal LePage Canadian Recreational Housing Report prospective cottagers have access to some of the most affordable recreational dwellings in Canada. The aggregate price of a recreational property within the province was cited as $238,600.

The report found that property prices in Manitoba have remained relatively flat when compared to 2016, due in part to the province’s balanced market and stable economy. Balance and stability are frequently also the key words used to describe the Winnipeg and Manitoba residential housing markets.

Looking ahead, according to the report, sales activity within the majority of Manitoba-based recreational markets are forecast to remain on par with levels seen in 2016, as the province’s balanced market continues to produce a stable amount of supply and demand throughout the year.

“Since 2010, Manitoba has been witness to a stable rise in new recreational listings each year, as waterfront properties continue to be developed and parceled off,” said REALTOR® Michael Froese. “While sales activity has either remained flat or waned slightly when compared to 2016, we’re seeing a constant stream of demand flood the market year-after-year, as buyers look to capitalize on the province’s affordable prices and great livability.

“Simply put, there aren’t many places across Canada where you can find a more cost-effective selection of year-round properties that offer great hunting, fishing and boating opportunities, all within a 75-minute drive of a major city centre.”

From the very beginning, accessibility and affordability were the hallmarks of Manitoba’s Cottage Country. In the era before the automobile became the preferred form of mass transportation, William Whyte of the CPR was the first railroader to envision a resort for “the toilers” in Winnipeg, who were “badly in need of a place within easy reach, where they can take a day’s outing and enjoy the health-giving breeze from Lake Winnipeg” (Montreal Gazette, April 20, 1901).

Whyte personally selected the site just south of Boundary Creek, where there was a sandy crescent-shaped beach stretching for 2.9 kilometres. After purchasing 13 hectares of land from farmer Donald Arquet for $1,000 on behalf of the CPR, Whyte named the location Winnipeg Beach to emphasize his vision for the new resort to serve the recreational urges of Winnipeggers. It was a few minutes before 1:30 p.m. on Saturday, June 6, 1903, that the first express train hauling 11 passenger coaches rolled into the CPR station “for Winnipeg’s new summer week-end resort.”

“In time the Lake Winnipeg Beaches became popular with the Winnipeg residents and they began to build cottages at Winnipeg Beach, Boundary Park, Sandy Hook and Loni Beach (part of the RM of Gimli) in ever increasing numbers ... and the railway line helped to improve the economic level of the residents of the ‘new’ Gimli municipality” (formed in 1908), wrote Michael Ewanchuk in Spruce, Swamp and Stone: A History of the Pioneer Ukrainian Settlements in the Gimli Area.

William Mackenzie and Donald Mann, who were the principals of the Canadian Northern Railway (today’s CN), looked to the success of Whyte and the CPR and decided to create their own resorts along the east side of Lake Winnipeg. Through numerous deals from 1914 to 1922, they acquired the land that would become the popular resort of Grand Beach, noted for its expanse of fine, white sand along the beach facing the boardwalk. Twenty-six kilometres to the north, they also established the more exclusive resort at Victoria Beach.

There have since been some changes in Cottage Country in recent years, according to the Royal LePage report. While affordability continues to drive demand in recreational markets across Manitoba, purchasers often look to the segment as a means to retire, invest or merely enjoy its associated lifestyle. As a result, a growing number of Generation Xers have recently begun to enter the market in hopes of finding a residence that they can enjoy with their family, and retire in over the long-term.

“Together, low borrowing costs and our market’s sheer affordability has made the dream of living life on the lake very attainable in Manitoba,” said Froese. “When met with an ample amount of supply, rising residential prices across the province have granted many prospective recreational purchasers the ability to buy now with an eye towards their future.

“As technology continues to evolve, the transition towards retiring on the waterfront becomes easier and easier,” Froese explained. “Prospective buyers are now able to set up an office in their cabin and work remotely while enjoying the lifestyle that a recreational property brings in the spring and summer months. There is now a reduced need to commute back and forth to the city.”

The Royal LePage report indicated that within the Interlake region, purchasers can expect to pay an average price of $252,000, $80,400 or $121,600 for a lakefront property, recreational condo or wood cabin, respectively. Of the regions studied, Lac du Bonnet was the only market in Manitoba that reported a price increase over the past year, as lower interest rates and greater faith in the overall economy bolstered market trends within the region. Overall, the average price of a lakefront property in the region was $440,000 as of May 2017, while riverside and wood cabins fetched $340,000 and $200,000, respectively, over the same period of time. In the region of Lake Manitoba, recreational pricing has remained relatively comparable to previous years, while sales have decreased slightly year-over-year. As a result, purchasers paid an average price of $295,700 for a lakefront property in the region during the month of May, while riverside dwellings and recreational condominiums fetched an average price of $324,000 and $239,800, respectively.

The heyday of Winnipeg Beach, Gimli, Grand Beach, and other locations along Lake Winnipeg as railway resorts, has long since passed, but the communities continue to attract tens of thousands of Winnipeggers throughout the summer months.

While Cottage Country has expanded to other communities throughout the province, today’s annual trek to the “lake” was first conceptualized by the railway tycoons of another era. Their “view to the convenience of clerks, office workers and business men,” as stated in  1903, has been a spectacular success.