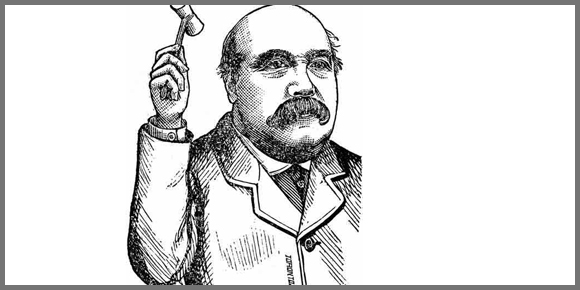 In 1870, a corner lot at Main and Bannatyne (the future site of the Robertson Block) was purchased for $250 and during the early days of the great land boom it sold for $118,000 to John Robertson. Space in the block was rented for the first local Imperial Bank branch in 1881.

According to James Scott, the initial president of the Winnipeg Real Estate Exchange (now WinnipegREALTORS®), established in 1903, the property that underwent many changes of hands was on the south side of the Assiniboine, part of which contained today’s Crescentwood. The original 269 acres was sold to A.W. Ross for $184,000 in the fall of 1881, who then sold it to J.H. Ashdown, J.W. Harris and others for $240,000. It was repurchased by Ross, who then sold the property to eastern speculators in early 1882 for $369,000.

At the height of the great land boom of 1881-82, even the Knox Presbyterian  Church at the corner of Portage and Fort was sold and realized $96,000.

Scott, James Flanagan and W.R. Sinclair bought a property on March 1, 1882, on the northeast corner of Main Street and Portage Avenue East (today’s William Stephenson Way), with a frontage along the street of just 12 1/2 feet and 72 feet on the avenue, for $35,000. Scott related that a St. Paul daily called them, “the three Winnipeg fools.” But a week later, they were offered $40,000 for the property.

The land speculation also brought booming business to the Winnipeg Post Office on Main Street. Bell wrote that a crowd gathered in front of the post office entrance each day to await the distribution of mail. Six or seven hundred people lined up to wait for the doors to open. The queue stretched into the middle of Main Street, blocking the sidewalk to pedestrians. With so many people rubbing elbows in one place, the police had to be dispatched to keep order.

“When the doors opened,” according to Charles Napier Bell, “the scene baffles description, the mass surging forward, carrying the policemen with it, the foremost individuals frequently receiving injuries by being dashed or pressed against the woodwork of the building. Once in, it was even more difficult to get out, and the windows on occasions were thrown open and served as exits.”

The December 24, 1881, Free Press described an incident at the post office as beggaring description with 200 people blocking the sidewalk so that nobody could pass. “They also pounded on the doors,” because the mail was late, to the effect that two policemen were called to the scene, who attempted to keep the sidewalk open.

When the doors opened, two policemen stood at the entrance with clubs in hand to wield against transgressors of law and order. The police only allowed small groups to enter at one time to maintain the peace.

The newspaper warned that such occurances could not continue. “Either the post office must close its doors in the evening (when the daily mail arrived), or the police must sternly keep the crowd off the sidewalk, so that the public may pass ... therefore it is desirable that if the turbulent spirits in the crowd cannot contain themselves, the pealers (police) should place them where the wicked cease from troubling.”

The March 17, 1882, Free Press described how a businessman paid another man a dollar for his place in the general delivery line and initiated an example that was followed by others.

“All that a man has got to do now to make money, is to locate himself in the crowd, and as he approaches the wicket throw out a label offering himself for sale. Then he can fall back, and in the course of time approach the wicket again and repeat the operation.”

The Free Press stated that such industry was the result of the Canadian government’s “everlasting stupidity and meanness ...,” as well as, “an apology for a post-office” building, “which persists in thrusting upon us inexperienced clerks at starvation wages.”

The newspaper added that the post-office was nothing more than a “lean-to” that was unfit for mail distribution.

As a result of the boom, there was a distinct lack of accommodations for the floating population continually arriving in the city.

A September 2, 1882, Free Press editorial stated that the land speculation during the winter of 1881 made it difficult for people and businesses to find accommodations, claiming that “it has been demoralizing in general results ... all agree that many properties have been made aritifically dearer, much beyond what there is anything to justify.”

A reporter for the Brampton Times, who took the CPR-organized 1882 press excursion to Winnipeg and track’s end, related that a drawback witnessed in the city “was its enormously high house rents, which are caused to a great extent from the fabulously high prices that have been paid for a little plot of land to be built on and the scarcity of building material” (republished in the September 22, 1882, Free Press).

The reporter indicated that a house that rented for $8 per month in Brampton cost $35 per month to rent in Winnipeg.

According to Bell, hotels were so crowded that cots were placed at night in corridors and offices. Men would wait for the last game of billiards to be played for the privilege of sleeping on the hard slate bed of a pool table.

New hotels opened daily, he recalled, to meet the demand, while some proprietors rented hastily constructed buildings for lodging sleep-deprived visitors to the city.

The Sun on September 4, 1882, ran a special report on the city’s hotels that indicated 3,000 people “find homes in the different hotels ... In the great majority of cases it was learned that one bed is occupied by two persons; many had rooms containing two or three beds, and some as many as four or five.”

The Free Press on April 2, 1882, contained a brief account of George Whitehead & Co. opening the Empire Hotel on Smith Street, just north of Portage Avenue. The article stated that the Empire was made of canvas and could accommodate 144 people.

One wonders about the validity of the following statement in the newspaper about the canvas hotel: “Everything is nice and comfortable, and as there are still a number of berths (not rooms) vacant it might be well for those in more crowded quarters to take advantage of the fact.”

Still, the same edition of the newspaper claimed that the “tent hotels” were described by guests, “as being a great  more comfortable than persons who have never inhabited one would at first be inclined to suppose.”

The article reported that meals in these tents were first-class and satisfying.

“Many a man, however, who has been earning $1.75 a day during the winter finds himself being relieved of his money at  (a) pretty rapid rate when he has to pay $1.50 a day for board and lodging,” continued the article. “This may not look like making money fast, nor does it appear very profitable or very comfortable to be paying fifty cents a night for sleeping on a floor; still men manage to pay those prices, and keep themselves liberally supplied with whiskey besides.”

Beecham Trotter, who lived in Winnipeg during the boom, paid $2 a night to sleep in a chair in a “miserable” Main Street hotel.

In the Sun report, 64 hotels were listed with only one not offering accommodations.

A Bismarck Tribune reporter quoted Shed Lambert (published March 10, 1882), who said that hotels were bigger money-making machines than mints. Lambert said it was almost impossible to get a bed to sleep in, and it cost $1.50 a night to occupy a bar room chair for a night.

Scott wrote that January 1882 witnessed the greatest rush of outside capitalists, so many that the hotels and boardinghouses were filled to capacity. Each evening in hotels, hallways were converted into sleeping quarters. Many slept on a hotel’s dining room floor for 50-cents apiece, using a coat as a pillow.

“One hotel keeper is said to have got so greedy that when his floor campers got soundly asleep he stood them up against the wall to make room for others on the floor.”

In August 1882, when the Oddfellows held their annual train excursion (they left from the CPR station then located just two blocks west of Main Street along Sutherland Avenue) for a picnic in Headingley, it was reported that they saw from the passenger cars “rows of brown tents with unwashed women standing at the door of each” just beyond the rail yards in the city’s North End.

In 1881, it was claimed that there were 7,000 people living in tents in Winnipeg, although D. Hope of Hope & Bromley, tent-makers, disputed this figure. Still, he was quoted in a December 29, 1882, Sun article as claiming his company and other firms, such as the North-West Tent Factory, in Winnipeg had sold about 2,700 tents since January 1 of that year.

It was during the boom that a phenomenon in Winnipeg evolved — the boardinghouse. One man, who lived in a boardinghouse in 1882, said it was “a style to be found nowhere else in the Dominion.” The first boardinghouses were hastily put together by using canvas over wood frames with the resulting non-partitioned structures possessing a combination of sleeping quarters and dining rooms.

Boardinghouse patrons were described as: “Men who were at one time high up in society, depraved lawyers, and decayed clergymen brought down by misconduct and debauchery, but still bearing about them an air of refinement ... carpenters smelling strongly of shavings, mill hands smelling of sawdust and oil, teamsters smelling of horse, plasterers fragrant with lime, roofers odorous with tar, railway laborers smelling of whiskey, in short all sorts and conditions of men” (Pierre Berton, The Impossible Railway).