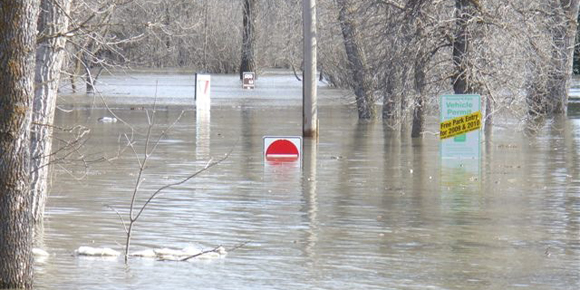 Flood of the Century struck 20 years ago

Each spring of every year, somewhere in Manitoba there is flooding. And each spring of every year, people and livestock are displaced by flooding, while farmland becomes so inundated that planting a crop is delayed — if at all possible — until the water subsides. It’s a fact of life in a province where flood plains dominate the landscape in which the vast majority of people live, work and play.

This year was no exception, as the Fisher River spilled its banks, forcing the evacuation of 135 residents of Peguis First Nation, which is an annual spring occurrence.

The Boyne River also spilled its banks, threatening 300 properties in Carmen. What made this unusual is that flooding is normally not a problem in Carmen. The Norquay Channel, a 119-year-old artificial drain connecting the Boyne and Souris rivers, usually provides flood protection. But there was a problem this year — an ice jam narrowed the channel, forcing water over the banks of the Boyne into the middle of town.

Ice jams are frequently the cause of flooding in the Red River Valley, especially to the north of Winnipeg, and this year property in Petersfield was threatened. Ice jams in the past have also put Winnipeg property along the Red and Assiniboine rivers at risk.

Following 1997’s Flood of the Century, protection for communities was enhanced, including the $665-million expansion of the capacity of the Red River Floodway, affectionately called “Duff’s Ditch,” named after Premier Duff Roblin, who ensured it was built in the first place. The expansion now provides protection from a one-in-900-year flood, which is well above the magnitude of the historic great flood of 1826. That  flood was 40 per cent greater in water volume than the 1997 event and its floodwaters were two metres higher than the disastrous 1950 flood. If a flood had occurred in 1997 of the 1826 magnitude, it is estimated total damages would have reached $5 billion.

Since 1997, Red River Valley communities have had their ring dike systems dramatically improved, while another 13 communities have new ring dikes. In total, 2,133 homes and businesses are now protected by ring dikes, the construction of which was cost-shared 90 per cent between the federal and provincial governments, with RMs contributing the remaining 10 per cent.

At lot has been learned about flood protection in the Red River Valley since the Flood of the Century struck 20 years ago, although that doesn’t mean that all will be saved when the inevitable major flood again strikes. For many who endured the 1997 flood, its images are indelibly burned into their minds as a mental reminder that Mother Nature can surpass even the best efforts of mere mortals. She emphasized this point in 1997 by unleashing a blizzard on April 5 that dumped as much as 50 centimetres of snow in Winnipeg and southern Manitoba, as well as across the international border, which made the Flood of the Century a monster in waiting that was poised to strike with ferocity.

Manitobans’ first inkling of a major flood in the making came from Grand Forks. On the evening of April 19, floodwater inundated the city’s downtown core. TV news reports showed flames licking at businesses that soon reduced buildings to empty shells. Fifty per cent of Grand Forks, North Dakota, and virtually all of East Grand Forks on the Minnesota side of the Red had been flooded.

Manitoba had slightly more time to prepare than the U.S. cities, towns and farms along the Red, and had a better system of flood protection, including the famous floodway, as well as the Portage Diversion (although, in 2011, Assiniboine River water overwhelmed the diversion and flooding along the shores by an engorged Lake Manitoba destroyed homes and cottages) and the Shellmouth Dam to the west of Winnipeg.

Whatever comfort Red River residents drew from the protective measures taken since 1950 evaporated as the floodwaters rolled across the border into Manitoba. In 1997, water found holes in the defences and relentlessly crept forward to cover formerly dry land. In Ste. Agathe, residents struggled to protect homes and property. What they did not expect was that Mother Nature would unleash high winds that whipped the floodwaters into a frenzy. As a result, water poured overland to eventually top Highway 75. The flood had struck, not from the east as would normally be expected, but from the back door to the west. Waves appeared amid homes, with crests comparable to those seen during a rampaging nor’easter on Lake Winnipeg. The great expanse of floodwater in the valley earned it the nickname, the Red Sea.

Some 8,500 Canadian troops, as well as reservists, arrived to help combat the flood. Farms and homes were ordered abandoned by the Manitoba government and the Emergency Measures Organization, which was enforced by the military and police. A number of evacuated homeowners stealthily returned to their homes and kept up their battle against the rising water. Many  forced to leave broke into tears when they returned and saw their homes had become victims of the merciless flood. In the  end, the flood claimed about 800 homes in the valley.

Free Press  writer Bill Redekop, who won the 1997 National Newspaper Award for his coverage of the flood, wrote that residents who stayed behind raised dikes, plugged leaks and made sure pumps were running. They formed clusters of three to eight people to protect homes and look after residences that were abandoned.

The original floodway, completed in 1968, saved Winnipeg, but the city came within a whisker of being inundated. An emergency 42-kilometre long dike, called the Brunkild Z-dike, was constructed when officials realized that overland flooding threatened the city. There was even a plan in place to evacuate 10,000 Winnipeggers along the Red and Seine. Fortunately, it didn’t have to be implemented. But when the floodway gates were raised in Winnipeg, homes down river from the diversion were seemingly sacrificed to save the city. A review after the flood revealed that opening the gates had contributed to flooding at Grande Pointe where 125 homes suffered water damage. Among rural areas of the province, the RM of Richot was the most badly hit during the flood.

After the flood, an extensive compensation program allowed homeowners, businesses and farmers to rebuild. In some instances, homes were bought out simply because they were too difficult to flood-proof — these homes should never have been built on a flood plain in the first place. People, similar to governments, need to learn lessons from flood events.

Twenty years ago, the crest of the flood peaked by late May 3 and early May 4, but the soldiers didn’t leave until May 14, when the flood was declared at an end. All that remained was the massive clean-up, and an evaluation of what to do when another inevitable major flood strikes.

Many communities along the Red are better protected than they were 20 years ago, but there is always the danger that Mother Nature will throw a curve ball to defy the best preparations made against future flooding.