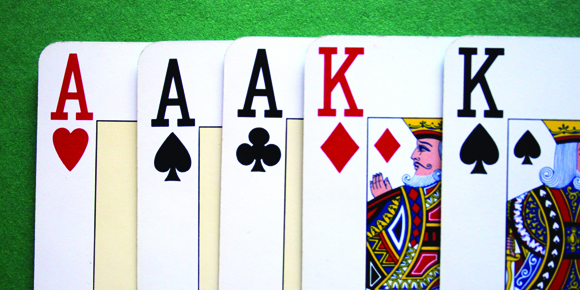 All work and no play

The word, ‘play,’ is found in a host of sayings. Many are clichés; some are idioms.

Examples: play with fire; make a play for; play it by ear; all work and no play makes Jack a dull boy.

If we play both ends against the middle, we scheme by pitting two sides against each other for our own benefit.

To play up to someone is to flatter or pretend admiration. Often used as a synonym for ‘to flirt,’ this phrase sometimes means something more serious than a flirtation. It can refer to gaining someone’s confidence.                 The saying began as theatre slang re: supporting another actor on-stage.

To play the Devil’s Advocate is a fascinating term. When you or I say this, we’re talking about argument for the sake of argument. But, the Devil’s Advocate (advocatis diaboli), in Catholicism since 1587, is a theologian who opposes the canonization of a saint by presenting the Devil’s view of the candidate’s worthiness.

When we speak of playing second fiddle, we’re referring to someone in a subordinate role. This expression also describes a suitor who isn’t the first choice.

The term comes from music — from orchestra. To produce harmony, someone must play a violin in a secondary role to the first violin. This saying, more than two centuries old, isn’t employed as a compliment. No one chooses to play second fiddle. Everyone wants to be the first violin.

To play one’s cards close to the chest is to do or plan something without revealing the true intention.

Cards appear in other sayings. We have, to play one’s cards right and to play our trump card. In playing that trump, we’re using something powerful or influential to gain some purpose.

Many ‘play’ sayings describe not-so-nice behaviour. For example, to play on someone’s feelings is to exploit fears, worries, etc. Also, if Jerry plays his father against his mother, he’s doing it for personal gain.

To play fast and loose is to act irresponsibly by pleasing oneself regardless of consequences.

Some sayings refer to problematic behaviour: to play with fire; to play into someone’s hands; to play havoc; to play chicken.

Foul play is an illegal activity, a criminal act. However, if Jack played no part in the robbery, he’s innocent and won’t be charged.

A play on words is nothing more objectionable than a pun. Since Eleanor would rather play the field than settle down with one man, if Fred continues to pursue her, he’s playing a losing game.

Other expressions have more than one meaning. Played out might mean, ‘exhausted,’ or it might refer to something that has run its course as seen in this question: “How did that idea play out?”

To play ball can refer either to the act of co-operating with someone or to an actual ball game.

To play by ear can mean to act in an ad hoc manner or to play a musical instrument without a written score.

To play it off (late 16th century) is to bring something to an end.