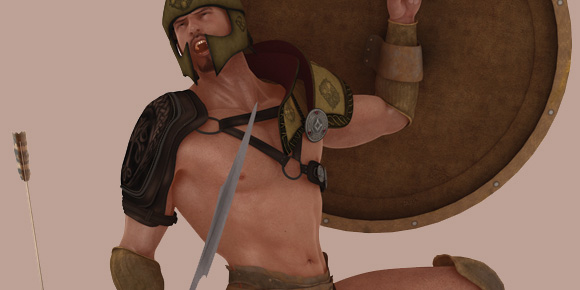 The war between the Trojans and Greeks

Priam, King of Troy, abandoned his son, Paris, on a lonely mountainside because seers warned he’d bring trouble to Troy should he live. Paris survived. A shepherd rescued him and raised him as his own.

The gods summoned the adult Paris to settle a dispute among three goddesses regarding their beauty. Choosing Venus (Aphrodite), he earned her undying gratitude.

He journeyed to Greece and was welcomed by Menelaus, King of Sparta, who was married to Helen, the world’s most beautiful woman. But Venus had promised Helen to Paris, so she caused them to fall in love. The two ran off to Troy together.

Priam, now too old and frail to lead his troops, assigned that duty to Hector, Paris’s brother.

When the Greeks reached Troy, Trojans rushed to confront them but were driven back behind their city walls.

The war dragged on for nine years. As the 10th year of siege began, gods and goddesses began to participate. Finally, the Greeks were forced behind barricades erected to protect their navy, then seemingly withdrew in defeat. But under Achilles’ leadership, they rallied and again attacked.

Every Trojan except Hector retreated behind Troy’s walls.

When Achilles spotted Hector, he killed him, then arranged to meet with Priam to negotiate both a truce and marriage to Priam’s daughter. However, Paris unexpectedly arrived at this meeting and killed Achilles by shooting him in the heel with a poisoned arrow. At once, a Greek chieftain killed Paris.

But Troy remained unvanquished so when Ulysses said, “If we cannot take Troy by force, we can do it by stratagem,” his plan was eagerly accepted.

Declaring return to Greece, they withdrew their fleet from Troy’s shores, then hid on the far side of a nearby island. Surprisingly, they’d left a huge wooden horse behind.

Many Trojans wanted to take the horse into the city. Others feared even to touch it.

Laocoön, priest of Neptune and respected seer, warned, “Have you not learned that Greeks are never to be trusted? I fear them even when they offer gifts.”

No one listened. Singing and dancing, the Trojans dragged the horse into Troy.

In the dark of night, Greek warriors emerged from the horse’s belly and opened Troy’s gates to the rest of their army. They then looted and pillaged the city.

And so Troy fell — through treachery, not force.

The term, “Achilles’ heel,” arose because his mother dipped the infant Achilles into the River Styx making him impervious to injury. She’d held him by one heel which now was the only vulnerable part of his body. Today, “Achilles’ heel” refers to the weak spot in a plan or undertaking.

Ancient writings never suggest Helen’s face “launched 1,000 ships.” We’re told only that the Greek fleet numbered 1,000 ships. However, English poet, Christopher Marlowe (1564-1593), in his play, Doctor Faustus (1592), coined that saying. He wrote, “Was this the face that launch’d a thousand ships, /And burnt the topless towers of Ilium? /Sweet Helen, make me immortal with a kiss.”