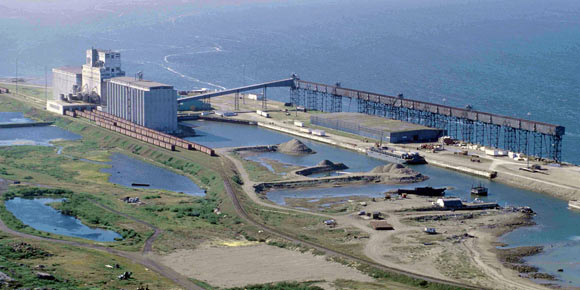 The Hudson Bay Railway (HBR) has always been the object of repeated emphasis on its potential with only a portion of this potential ever being realized. And now, it appears that any talk of its future potential is on hold.

OmniTrax Canada recently confirmed that it intends to sell the HBC as well as the Port of Churchill. OmniTrax purchased the CNR line to Churchill in 1997 for $11 million, as well as the port facilities for a token $10. The Port of Churchill is Canada’s only deep-sea port in the Far North. The HBR line begins in The Pas and services a number of remote communities with freight on its 1,000-kilometre journey to Churchill. The semi-weekly passenger service on the line is operated by Via Rail.

During the shipping season, which is normally from the end of July to October, 300 to 500 people are employed at the port, while another 80 to 100 employees run the rail line.

That “vital transportation link” is on the verge of being severed unless a buyer can be found, and that is uncertain, as OmniTrax admits the line has been plagued by less than expected grain deliveries.

OmniTrax Canada president Merv Tweed said that investors are anxious to get a return on their investments. He said there are organizations out there with an interest in the port and railway who aren’t too concerned about profitability.

OmniTrax spokesman Ron Margulis told the CBC’s Karen Pauls that the company is “talking with organizations” to both the port and railroad. Whether it’s a private or public organization has yet to be revealed.

Manitoba’s Minister of Infrastructure and Transportation, Steve Ashton, has been in talks with federal Transportation Minister Marc Garneau about the fate of the port and railway. Ashton is seeking federal funding to keep both of them open, but nothing has yet been decided on the federal level.

“Churchill is critical,” said Ashton. “It’s a strategic trade corridor ... The future of Churchill involves further investments and increasing the scope of those investments — not just focusing on the short-term nature.”

Ashton said OmniTrax was serious about finding a new owner and that there’s “huge potential” if the provincial and federal governments step up.

The Manitoba minister said the potential for Churchill is to add new opportunities, besides just grain, to move military helicopters to consumer goods, including potash, as well as a science hub for climate changes studies.

Ashton told the CBC that potential investors include First Nations groups, Mexican companies and even a group from India.

Since Churchill contains Canada’s only deep-sea Arctic port, some are promoting retention of the HBR and the port facilities as a “national interest.”

Grain shipments from the port had slipped dramatically. Only 184,600 tonnes were shipped this year as opposed to 540,000 tonnes in 2014. Some had warned that the previous government’s decision to disband the Canadian Wheat Board’s single desk for exports would ultimately detrimentally affect the port and compromise its future as a grain shipping facility.

With the sale of the railway and port still in limbo, it will be difficult to convince grain companies to commit to using the facilities overseas shipment for the coming season.

From its very beginning, the HBR was envisaged by Western Canadians as a tool to break the protectionist policies of the Canadian government that benefitted eastern manufacturers at the expense of prairie farmers, as well as providing a cheaper alternative to Great Lakes ports for shipping prairie wheat to the world.

By 1884, railway contractor Hugh Sutherland of the Winnipeg and Hudson Bay Railway Company had only managed to build a short stretch of track to Shoal Lake, Manitoba, in the direction of Hudson Bay, and no more track was laid for years. On March 10, 1896, the northern railway appeared to be another step closer to reality when Ottawa passed the Hudson’s Bay Railway Bill, but enthusiasm was shortlived as politics constantly interfered in the continuation of the tracks toward Churchill.

Canadian Northern Railway (later merged into Canadian National Railway) built a track west from the Manitoba border to Prince Albert, Saskatchewan, and built a track along the Saskatchewan River to The Pas in Manitoba by 1910. A line between The Pas and Gillam became operational by the outbreak of the First World War, although the war effort limited maintenance and operation to mile 214 (Pitwiktonie) of the route by the spring of 1916.

Sir Donald Mann and Sir William Mackenzie of the Canadian Northern Railway, who had been instrumental in early efforts to bring the railway to Hudson Bay, both expressed the opinion that “incalculable wealth” awaited discovery in the north once the line was completed, which turned out to be the case in terms of minerals and forestry products.

While the rail link was completed in 1929, it wasn’t until 1931 that the port facilities were finished and the Hudson Bay Railway was officially declared open.

The irony is that farmers at first enjoyed lower grain shipping rates with the completion of the HBR, but insurance companies decided the route was too dangerous and raised their premiums to an amount equal to the freight costs to Montreal or Vancouver. Obtaining insurance for northern shipping through Churchill past the present shipping season still remains problematic.

The problem is that much of the line is over unstable bogs, which are a major cause of derailments. The Transportation Safety Board of Canada indicated that there were 63 accidents on the line between 2003 and 2012, with all but 10 were derailments. The unstability of the line effectively killed OmniTrax’s plans to create a new revenue stream by shipping crude oil to Churchill, which was opposed by environmentalists and First Nations groups. To make the line more viable for heavy freight traffic would require track bed stabilization costing millions of dollars.

“A half-century of tireless effort had finally produced a railway to the Bay, but it was all in vain,” wrote historian Ed Whitcomb in A Short History of Manitoba (1982). “It should have been a major victory for the West, instead it accomplished almost nothing. Another farmers’ dream had died.”

Still, it could be a dream that is realized if it doesn’t involve a profit motive.