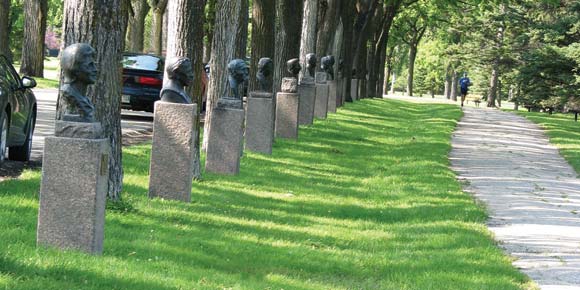 Hall of fame in Assiniboine Park

Who are these replicas sculpted after and why are they there?

The Citizens Hall of Fame is a unique program that celebrates citizens who have brought recognition to Winnipeg or who have made outstanding contributions to the quality of life and development of our fair city. Although there are several programs out there to celebrate ordinary citizens who have made extraordinary accomplishments, none incorporate an artistic component that is on the same level as the Citizens Hall of Fame.

Each of the 42 citizens inducted into the Citizens Hall of Fame are honoured through a likeness sculpted in bronze that is then installed at the site in the Assiniboine Park. Respected artists such as Leo Mol, Eva Stubbs, Helen Granger-Young, Madeleine Vrignon, Josef Randa and Erin Senko (nee Brown) have made contributions to this one-of-a-kind art installation. Although they come from different backgrounds, they all share one commonality — the ability to call Winnipeg their home.

Who are the people who have been nominated?

They are politicians such as Duff Roblin, Bill Norrie, Stephen Juba and James Ashdown who have helped lead and advance our community.

They are leaders in the medical field such as Dr. Naranjan Dhalla, Dr. Bruce Chown, Dr. Henry Friesen, Dr. Arnold Naimark, Dr. Paul Thorlakson and the 2015 inductee, Dr. Allan Ronald, who is known for his international work treating and controlling infectious diseases such as AIDS/HIV and the Ebola virus.

They are philanthropists who have worked tirelessly behind the scenes to make Winnipeg a better place to live such as Isreal Asper, Edward Drewry, Robert Chipman, Sol Kanee, and Sir Augustus Nanton, who, at the outset of the First World War , became the president of the Manitoba Patriotic Fund and raised an astounding $120 million in Manitoba for the war effort. Leading by example, he donated over half of his own money to the cause.

They are suffragists and crusaders in gender equality such as E. Cora Hind and Nellie McClung.

They are artists of a wide array of fields such as painter Lionel Fitzgerald and authors Carol Shields and Gabrielle Roy.

They are people who gave back to the community through volunteering such as Isabel Auld, Sister MacNamara and Vince Leah, who’s contribution to sports touched hundreds of Winnipeg’s children.

They are heroes and mentors who are loved world-wide such as Terry Fox who’s legacy still lives on today.