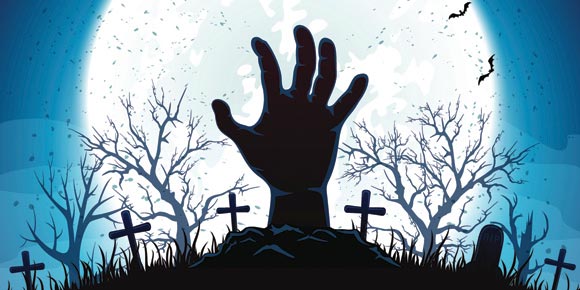 When the dead prowl the Earth

Fear of the dead is an ancient fear, and to see the dead out of their graves and walking among us is an equally ancient terror.

Such terror is the origin of the Halloween fires lit everywhere by the Celts who practised Druidism. They believed fire was a way of repelling spirits returned from the dead. This custom of using fire for protection from the supernatural lingers even today. It’s why we put lights in jack o’ lanterns.

But why are we so concerned with the dead on this particular day? Why Halloween?

As it so often did, the Church imposed a Christian festival on a pagan one as a way of suppressing pagan belief. Thus, the Feast of All Souls is a continuation of a heathen feast of the dead.

Because of both Christian and pagan aspects, an air of superstition, mystery, and other-worldliness hovers over Halloween.

Some of the lore of Halloween comes directly from the occult. For example, the Devil is said to possess extra powers on that night, and, if you should happen to see him, he will probably appear in the form of a goat. It is believed that if you watch the night sky carefully, you are sure to see witches riding on broomsticks. As well, goblins, fairies, and such creatures hold special get-togethers on this special night.

Halloween is also the time when ghosts, and spirits of every kind, rise from their graves and prowl the night. Some ghosts take on ordinary human form. Others come as skeletons. Still others are invisible to us, but their presence can be sensed. Whichever way these risen dead appear, they are frightening.

And this is why children used to arrive on our doorsteps disguised as ghosts and ghouls and goblins. They were unknowingly keeping alive the ancient tradition of terror on All Hallows’ Eve. Today, when you answer that call for “Halloween Apples,” you are more likely to find a child dressed as an alien from outer space, or a hockey hero or an astronaut.

Still, it appears that vampires and zombies are big news to youngsters these days, so if you do get a fright, it probably won’t be from a simple little ghost.

• Ghoul is Arabic. According to Muslim folklore, a ghoul is an evil spirit that plunders graves and feeds on corpses.

• Ghost is probably the pre-Teutonic term for fury or anger. In Old English, it was gast or gest.

• Goblin is from Middle English, from gobelin (rogue; demon).

• Zombie is from the Kongo word, gumbi (fetish).

• Hallow is the Old English form of “holy.”