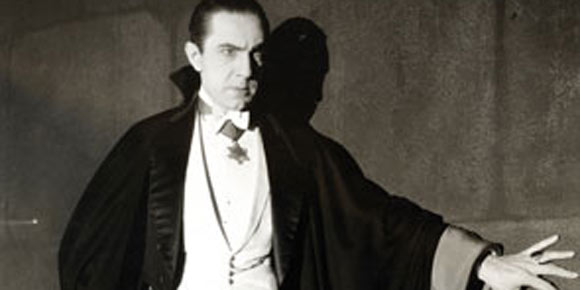 Today, it’s hard to imagine that Dracula, the horror film starring Bela Lugosi, once sent chills down the spines of 1930s movie-goers. In the era of The Walking Dead and zombies feasting on human flesh in exceptionally gory detail, the much-earlier vampire film is downright tame by comparison.

The only blood found in the 1931 Universal Studios horror classic is when Renfield pricks his finger on a paper clip and Dracula creeps toward him with glee, only to be repelled when the crucifix falls in front of the bleeding finger.

But every Halloween, the old film from the Golden Age of Horror Cinema is resurrected and shown on such networks as Turner Classic Movies, as is Frankenstein, which was also released in 1931 by Universal.

When it was first shown in February 1931, Dracula was “not a picture for too squeamish people to see, but there is no denying its dramatic power and tingling thrills,” according to a review in Film Daily, February 15, 1931.

The Hollywood film was actually proceeded by a play of the same name that had run for four years in London and on the Broadway stage. In 1930, the play came to Winnipeg’s Walker Theatre.

“In the play he (Dracula) has begun his fiendish work on Lucy Westenra, a beautiful girl, and brings to his assistance numerous of his unwilling subjects,” reported the November 8, 1930, Winnipeg Tribune. “How he appears and disappears at the most unexpected times and in apparently the most inaccessible places is exciting and thrilling. How he is battled with by the brainy hero and finally overcome forms one of the most hair-raising episodes ever attempted on the stage ...”

The stage version of Dracula was billed as a “thrilling mystery drama,” and was well received by Winnipeg theatre-goers, although some were nearly frightened to death.

“A woman’s piercing scream of terror rang out in the audience in the Walker Theatre on Monday evening at the conclusion of the second act of the production of ‘Dracula’ by the Walker Repertory Company,” according to a November 11, 1930, review in the Tribune. “That scream afforded testimony, as sincere as it was involuntary, to the gripping excellence of the opening performances of Bram Stoker’s famous mystery horror.”

Stoker, of course, was the author of the 1897 novel, Dracula, upon which the play was loosely based.

Hungarian-born Bela Lugosi played the lead role on Broadway. He happened to be in Los Angeles with a touring company of the play when the film was being cast. Against the tide of studio opinion, Lugosi lobbied hard and ultimately won the executives over, thanks in part to him accepting a paltry $500 per week salary for seven weeks of work, amounting to $3,500 (Wikipedia).

Film Daily said that Lugosi had created “one of the most unique and powerful roles of the screen in this one.”

“Dracula will thrill you at Lyceum today,” was the claim in the March 14, 1931, Tribune. A later announcement was that the film was being held over for another week at the Lyceum Theatre in Winnipeg.

“‘Dracula,’ which is based on the famous story by Bram Stoker, and which has already been seen in Winnipeg on the speaking stage proves a more thrilling picture than it was a play,” according to the March 31, 1931, Tribune. “Bela Lugosi, who played the title role in the stager version, also plays it on the screen, but the added possibilities of the talking screen give new meaning to the thrilling story.”

Lugosi’s heavy Hungarian accent gave the character he played on the screen a hint of European mystery and the possibility he was actually an aristocratic  count, although the same accent would become the brunt of many future jokes.

The film was so popular locally that it was shown in other Winnipeg theatres throughout 1931, such as the Rialto and the Roxy.

Later in 1931, Universal would release Frankenstein, starring Boris Karloff as the monster, to even greater acclaim. Universal, in particular, would become the forefront of early horror cinema, with a canon of films including The Mummy, another film with Karloff (1932), The Invisible Man with Claude Rains in the title role, (1933), Bride of Frankenstein, featuring Karloff again as the monster and Elsa Lancaster as the bride (1935) and The Wolf Man played by Lon Chaney, Jr. (1941).

A review in the January 2, 1932, Tribune claimed that Frankenstein was said to “out-Dracula ‘Dracula’ for its horrors.

“As a production it is ranked as a masterpiece. As screen entertainment it will be among the most talked about pictures to be shown in Winnipeg in the coming year. As a magnet for the theatre box office it has broken attendance records wherever shown.”

Frankenstein, based on the 1816 novel by Mary Shelley, also made it’s Winnipeg debut at the Lyceum. In Shelley’s novel, Frankenstein was the last name of the mad scientist who created the monster. Originally, Lugosi was cast to play the monster, but he left the project in disgust. The script originally given Lugosi didn’t mirror the final script used by Boris Karloff, which was to the latter’s benefit.

“Compared with ‘Frankenstein,’ ‘Dracula,’ the he-vampire story which was regarded as presenting the ultra in horror is but a bed-time story,” asserted the January 9, 1932, Tribune.

“Scenes in the scientist’s laboratory, where the ‘monster’ is created out of portions of corpses and galvanized into life by the application of super-powerful electrical rays, present the acme of realism. The graveyard scenes, with which the picture opens, are also well calculated to produce fright and are grimly splendid ... the ‘monster’ of Boris Karloff is a study in hideousness.”

The reviewer, only listed as A.E. McG., said that it wasn’t a picture “for children or those easily frightened. But if your nerves are steady, and your conscience clear, you will thoroughly enjoy this most artistic horror ...

“It is a picture to be seen — breaking new ground and unquestionably the greatest of its kind ever shown here. But, blame yourself if it raises goose flesh.”

Clearly, the studio, which started out with Dracula, was getting better at the horror film genre, although what was then regarded as a portrayal of “realism” in Frankenstein’s laboratory, with its crackling of electrical discharges, is today viewed as somewhat hokey and rather amusing than horrifying.

The problem for Universal was that the horror genre ran out of steam. Instead of bringing highly-popular horror books to the silver screen, spoofs began to appear, such as Bud Abbott Lou Costello Meet Frankenstein. The picture was the first of several films where the comedy duo meets classic characters from Universal’s horror film stable.

Although the classic Universal monsters may not elicit the same chills as they did when first released, they are still fun to watch. So on Halloween, pop some popcorn and sit back and enjoy these horror classics on TV.