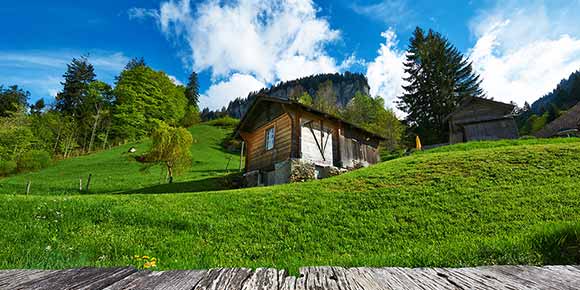 Cottages are a good place to relax, but can demand a lot of maintenance. In fact, I would guess that many cottage owners are DIYers or have a handyman in the family capable of minor or major repairs.

In my case, I shared the cottage upkeep with my DIYer brother-in-law until he and his wife purchased a hippie retirement home on Pender Island in the Gulf of Georgia. It was a sad day when they left Winnipeg in their perfectly preserved VW bus, the sides festooned with peace symbols, flowers and anti-Nixon slogans. My wife and I remained behind, the sole owners and preservers of the family cottage.

This brings me to the topic of how to level an older cottage. Though building bylaws are changing and, in some cases, now require a concrete footing and underground pilings to support a new structure, most three-season older cabins rest on concrete pads that often sink unevenly into the ground, skewing the entire structure.

Fortunately, most seasonal cottages are elevated above the ground to allow dry air to flow under the building and to allow room for a person to access plumbing or wiring that runs through the crawl space. This space is also convenient for those who wish to examine the joists, beams, posts and pads that form the platform on which the cottage is built. My vacation home was constructed in the ’30s or ’40s out of clear Douglas fir which is very strong and rot resistant, so when I checked under the crawl space the wood comprising the undercarriage was in excellent shape. The only problem was that a field stone and mortar wall and a set of concrete stairs had sunk into the ground, moving down and away from the front elevation of the building. Field stone footings and poured-on-site stairs were a functional and aesthetic feature of cottages back in the day. I discovered these two pieces of cement and rock had lost their utility and beauty over the years—the footing was no longer supporting the front of the cottage and the stairs were skewed about six inches to the south. Because of their prodigious weight, I was thankful they were not tied to the cottage.

My first reaction was to consult a building leveler. I was quoted $16,000 to level the cottage, including the replacement of fir posts under the building that were still in good shape. I was shocked by the estimate, as was a neighbour who received similar news concerning his cabin. Being a DIYer, I was tempted to undertake the work myself, but the immensity of the undertaking made me balk.

About a week later, a good friend and former weightlifter arrived at the cottage to take a look at the problem. To my anguish, after a cursory view, he hefted a sledge hammer from the back of his pick up and began to pound away at the field stone foundation.

“What are you doing?” I exclaimed.

“You want to fix your cottage don’t you?” he said. With that, he continued to bang away at the stubborn retaining wall. It was 12-inches thick and over 24-inches high above ground level. In some areas along its 30-foot run, it had sunk deeply into the soil. He motioned to the box of his truck where I saw an extra sledge he had brought for me. I knew the situation had become irreparable. There was no turning back.

I won’t describe the agony and the ecstasy of the following days, though they were three of the hottest and muggiest in June. We smashed doggedly at the footing, gradually breaking off chunks from the main wall that were levered out of the ground with a pry bar and then broken into rubble with further blows of the sledge hammers. We filled the pick-up four times with heaping loads of crushed rock and concrete that was carted and unloaded by hand at the local landfill.

The steps proved even more difficult to dismantle than the retaining wall because they were almost solid throughout, a mixture of small beach stones and a lot of well-mixed mortar. We worked assiduously at pounding them to dust, however, the final two stairs resisted even the mighty blows of my weightlifting friend. Finally, there was a moment of ecstasy when we realized we could hide the last bit of unforgiving rubble with a deck and a new set of stairs.

The final step was to construct two 16-foot laminated beams comprised of four two-by-10-inch layers of lumber, each glued and screwed to the other. We were able to roll the beams under the front of the cottage and hoist them temporarily into place with 20-ton hydraulic bottle jacks, available from Princess Auto, Canadian Tire and other auto outlets.

With the beam positioned tightly against the joists, we placed and leveled 115-pound concrete support pads under the ends of each beam and about every five feet on-centre under its entire length. We jacked up the front of the cottage a little at a time until our eight-foot bubble level and a laser level I had borrowed from a neighbour both agreed that the building was level. We then jacked it slightly higher to allow for settlement in the first years. We removed temporary posts that supported the cottage and replaced them with green-treated six-by-six-inch timber centred over each pad. Leveling the front elevation turned out to be the least physically demanding part of the renovation.

If you consider your own DIYer leveling operation, take great care to ensure you have a back-up support system before you crawl under your cottage to remove an old beam or post. Leveling around the perimeter of a cottage is somewhat safer because you rarely need to be under the building when you are at work. However, safety measures are still tantamount and, in our case, we used both a jack and an extra post to temporarily support the section of the cottage where we were installing the main beam. Hard hats, safety glasses, elbow and knee pads are also recommended.

With care and consideration, leveling a cottage can be accomplished by a DIYer who has a friend who does not dither over details.