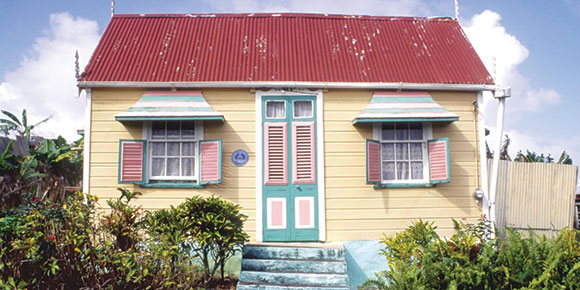 Homes unfirmly rooted in the past

Chattel, as every sales agent knows, is a common term found in real estate contracts that refers to tangible movable or immovable pieces of personal property such as furniture. Rarely does the word refer to an entire home itself; that is, unless you’re in the Caribbean island of Barbados.

In Barbados, chattel houses are part of the island’s history, and hundreds can still be found throughout the country as well as in a few other Caribbean islands. They were originally built in the 17th century by country folk who worked in the sugar plantations and didn’t own the land on which their houses stood.

Instead of a permanent foundation, the homes were erected on loosely packed stones and blocks of coral. One advantage was that if a labourer was evicted by a plantation owner or had to go elsewhere for work, the home could easily be dismantled and moved. Being raised off the ground had another advantage in the tropical climate — air could circulate beneath the home, providing a cooling effect.

Though each one is unique, they share some characteristics. The small, boxy structures are built of wood panels and are symmetrical in design. A central door has a window on either side with shutters that are hinged either from the side or from above, allowing the homeowner to adjust as needed based on weather conditions, opening wide on breezy, sunny days, or closing tight during hurricanes.

Many of them are also brightly painted, such as yellow with blue trim or purple with pink trim. Still others are painted in three or more shades. No two are exactly alike when it comes to colour.

In the 20th century, chattel house styles began to change. The roof, which originally would have been thatch, is nowadays often corrugated iron and is steeply pitched.

Though the homes began as a single unit under one roof, additional units were later added to the rear, as income and family size expanded. These days new homes on the island are often built of concrete, but Bajans continue to incorporate many of the details found on chattel houses into their modern dwellings.

Some of the best examples of chattel homes can be found in the northern parish of St. Lucy, in the villages of Greenidge and Connel Town near Archer’s Bay. Another place to see chattel houses is at Tyrol Cot Heritage Village in St. Michael Parish, which has several replicas of chattel houses of a classic design perfected around the 1930s, set in three acres of landscaped gardens. They contain antiques from the 1920s and give a sense of the home life of the majority of Barbadians at that time. The tourist attraction maintains that “each house is the epitome of perfect Georgian symmetry and harmony.”

Some chattel houses are so treasured and valued they have been listed by the Barbados National Trust. The homes are also a popular subject matter in local art works, particularly paintings. Fortunately, for preservationists, the “creative folk architecture of old Barbados,” as they’re sometimes called, is still part of the landscape and can easily be found throughout the island.

(This article originally appeared in the June 2015 edition of REM.)