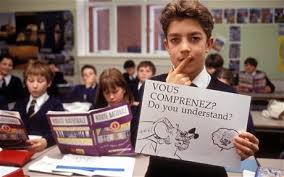 The medium is the message

When Horst wrote in July, he said that while studying French, he was “intrigued to discover ... in that language médias is the plural of média!”
Stick around, Horst. It’s happening in English, too.
Media, correct plural of medium in both English and Latin, should be paired with a plural verb — “The media are,” not, “The media is.” Medium, a singular noun, should be used with a singular verb — “The medium is the message.”
In real life, however, media is usually viewed as a collective noun used with a singular verb, e.g., “The media is on top of this story.” It’s now acceptable for either a singular or plural verb to accompany media. That is, it’s no longer inaccurate to say, “The media has been invited to the ribbon-cutting.”
In recent months, we’ve begun to hear the plural, medias. But media is not singular. Thus, medias is not only an unnecessary addition to English, it isn’t considered a conventional plural.
But, as readers know, English is constantly changing. So, sadly, it’s probably only a matter of time — and a short time at that — until medias becomes a recognized plural for an already plural word.
Usage experts continue to stress media’s plural status. Collins Gage warns, “Careful writers and speakers avoid using media as a singular.”
When Contemporary Usage polled its usage panel re medias, none of the 166 panelists approved. Some comments are amusing: “I would expect such use coming from the White House,” and, “Good God!”
Oxford says media “is also increasingly used in the plural form, medias, especially when referring to different forms of new media ... ‘There were great efforts made by the medias. . .’”
American Heritage’s usage panel also renounces medias, saying, “The use of medias as a plural form is condemned.” Still, this same source says media is an “alternative” plural for medium. The other suggested plural is medium.
Sigh.  Already mediums is acceptable in U.S. usage.
Medium is from the Latin medium/medius (the middle). “Median” and “mediate” also originate in this Latin term. Dictionaries list 10 meanings for medium, the first being the idea of a position mid-way between two extremes — medium hot; medium size.
It’s probably inevitable mediums and medias should become acceptable. We already have similar usage regarding other Latin plurals.
Few people recognize “agenda” as a plural. At any conference or meeting, you’ll hear this word used only as a singular. Here’s an example from the novel, Final Target, by Iris Johansen: “Think what you like. We all have our own agendas.”
The same situation exists with the singular word, “referendum,” the plural of which is, “referenda.” On November 13, the Globe and Mail ran an article about New Zealand’s discussions re adopting a new flag. The Globe said that Prime Minister John Key “last month announced binding referendums on the matter.”
Unfortunately, there’s no rule we can apply to the treatment we give loanwords. It is popular usage that dictates how we deal with them and what becomes of them. Right now, popular usage suggests that medias will become an acceptable plural for media.