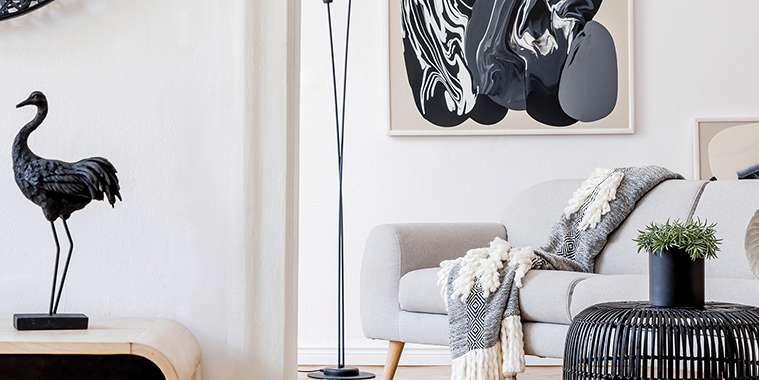 Like a martini, this urbanite look blends a mix of design flavours to sophisticated effect. Industrialism’s hard edges are softened with Mid-Century Modern teaks and rosewoods, and minimalist colour cues are shaken up with a splash of Art Deco’s pizzazz. And while there’s room for variation of the shaken-not-stirred variety, like any good cocktail, Urban Modern Design relies on a specific recipe for success.

Urban Modern style is derived from designer lofts that became popular in major American metropolises in the 1970s. Before “loft living” came into vogue with the urban elite, these large post-industrial spaces were hothouses for the city’s artists.

In New York in the 1960s, the historic preservation movement helped to protect decommissioned factories and abandoned warehouses in the South Houston industrial area. The raw, open interiors were rapidly transformed into studios and enclaves for creators with modest budgets — among them, the Warhol Factory.

Where trendsetters go, money follows. As Sharon Zukin writes in Loft Living, “By the end of the decade, when photographs and descriptions of artists’ lofts began to reach a wider public of magazine readers, the journalists declared that loft living had panache.” As the affluent moved in, hard industrial features were softened and high-tech furnishings were made more comfortable. In due course, the rundown area South of Houston became SoHo, and the Urban Modern style was born.

“Loft living has played an important role in ‘domesticating’ the industrial aesthetic,” Zukin says. The domestication of the mechanical, nuts-and-bolts aesthetic has also led to its versatility. To achieve an Urban Modern look you don’t need an abandoned factory; open space, understated furnishings and oversized art will do.

“Frasier” has entered the living room

Minus the frayed Barcalounger inherited from his father, the stylish high-rise residence of Dr. Frasier Crane — titular character of the ‘90s spin-off sitcom Frasier — is one of the most iconic examples of Urban Modern interior design. To set the stage for the radio talk-show shrink’s return from Cheers, Boston to uptown Seattle, production designers elected for a decidedly urbane look, skyline and all.

The iconic living room in “Frasier” is decorated in a neutral palette that’s punctuated with woods and touches of black. Soft furnishings such as the Italian suede sofa (which was modelled after the couch in Coco Chanel’s apartment) take a backseat to pieces like the Nick Berman Design Floating Ball side table, or the custom-made coffee table. Eames and Wassily chairs and furnishings inspired by the Art Deco designs of Emile-Jacques Ruhlmann offer subtle élan to the eclectic space.

Central to the apartment’s refined Urban Modern aesthetic are choice pieces of art. A replica of a 1939 Jack Otterson painting hangs on the wall behind the grand piano, African and pre-Columbian art objects pop from shelves, and to the right of the marble fireplace sits a Dale Chihuly glass sculpture — valued at $30,000!

In a Season 8 plot twist, Frasier’s new boss asks him to “teach me to have as much taste and style as you.” Frasier invites him over and in a short time, his boss has moved into the flat downstairs and completely replicated Frasier’s apartment — minus the lounger.

The “Great Crane Robbery” was more than just a tale of fiction. In the years the show was on the air, Frasier-influenced design cues were cropping up in homes across the country — contributing even to a resurgence in sales of Eames lounge chairs.

• Neutral colour palette Beige, black and white are the primary hues of Urban Design. While the odd metallic or colour is often added, the inclusion of natural wood brings in an element of warmth. This distinctive colour palette adds an important level of cohesion to the otherwise eclectic space.

As with Frasier Crane’s apartment, in an Urban Modern space, the coffee table is more likely to be a statement piece than the couch. Interiors are typically furnished eclectically rather than uniformly to reflect a sophisticated level of curation. Whether soft and plush or slick and linear, inspiration is often pulled from Art Deco, Mid-Century Modern, and High Tech designs.

• Overstated art Art is fundamental to the Urban Modern aesthetic. The immense post-industrial spaces initially co-opted by artists provided ample room for large canvases and projects. The oversized focus on art has stuck ever since. Gallery walls are another variation of this theme. True to form, art objects tend to fall into the modern and avant-garde genres.

• Bringing the Urban Modern style to your home

The versatility of Urban Modern interior design makes it easy to bring into your home — whether you live in an apartment, a house or a loft. The neutral colour scheme is an excellent canvas for heirloom pieces or vintage wooden treasures. The adaptability of the Urban Modern design spectrum allows you to tailor to your tastes.

Most importantly, art is at the heart of every Urban Modern home. Take a cue from Frasier Crane and purchase a replica of your favourite modernist work — or, DIY your own piece. Whatever you do, make it your own.