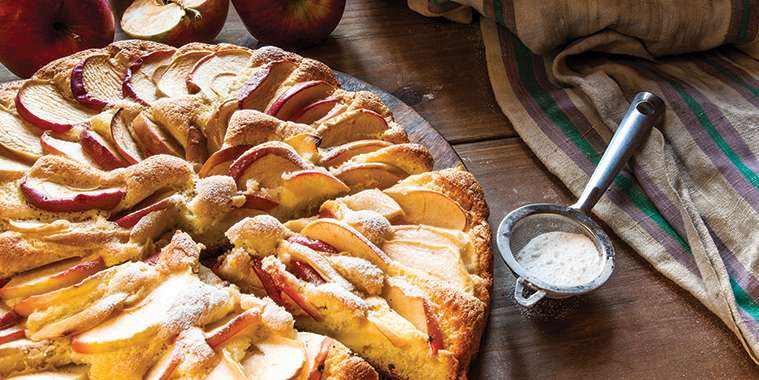 What better seasonal aroma is there than cinnamon? And what better way to serve it than in a warm apple cake for dessert?

There’s no doubt that cinnamon reminds us of the holidays and makes us feel cozy. It’s spicy and enticing, comforting and sweet, all at the same time. Apparently, our love of cinnamon dates back 2000 years to the Egyptians and was used to embalm mummies, although it also originated in China.

Cinnamon is an evergreen tree that grows in warm climates and is characterized by oval-shaped leaves, thick bark and a berry fruit. Only the inner bark is used. When harvesting the spice, the bark has to be processed immediately while the inner bark is still wet. The cut stems are processed by scraping off the outer bark, then beating the branch evenly with a hammer to loosen the inner bark, which is then pried off in metre-long strips that curl into rolls (“quills”) as they dry, which takes four to six hours. Once it’s dry, the bark is cut into 5 to 10 cm (2 to 4 in) lengths for sale.

Cinnamon is a great spice to pair with fruit, particularly apples, and is a big part of this favourite dessert traditionally served at Hannukah. But this cinnamon apple cake is so delicious, you’ll want to eat it anytime.

Since Hannukah begins on Monday, December 29 this year, here are a couple of fun facts about the Festival of Lights you may not know about.

• Hanukkah isn’t a major Jewish holiday. In fact, it’s not even mentioned in the Torah. But because of its proximity to Christmas, Hanukkah became a widely celebrated holiday beginning in the late 1800s. It starts at sunset and lasts for eight nights.

• A menorah is actually called a “hanukkiah.” An actual menorah has seven placeholders all at the same height, while a hanukkiah has nine, with one at a different height.

• Gifts are only given because it’s close to Christmas. Gift-giving isn’t a traditional part of Hanukkah, but kids were given gelt money as an incentive to study the Torah.

• There are 16 ways to spell Hanukkah. Since Hanukkah is transliterated from Hebrew letters, there are many different ways to spell the name of the holiday. The most common in English are “Hanukkah” or “Chanukah.”

This is a very moist and dense cake. The cream cheese adds a touch of tanginess and a rich, cream-like texture to the cake while still having a delicious caramelized, crusty top and sides. You can sprinkle it with toasted chopped walnuts or sliced almonds to add even more crunchy scrumptiousness.

2. Beat 1½ cup of sugar with the butter, vanilla extract, and cream cheese in a bowl until soft and creamy; beat in the eggs one at a time, beating well after each addition. Whisk together the flour, baking powder, and salt in a bowl.

4. Stir the flour mixture into the butter mixture to make a smooth batter, and mix in the apples. Pour batter into the prepared pan. Sprinkle the top of the batter with the reserved cinnamon-sugar mixture. You can arrange thin slices of apple in a pretty pattern on the top of the cake if you’re feeling creative. Sprinkle a bit of the cinnamon and sugar mixture over the apple slices.

5. Bake in the preheated oven until the cake pulls away slightly from the edges of the pan, about 1 hour and 15 minutes. Cool cake completely on a wire rack before removing the pan and slicing the cake. Powder with icing sugar if you wish.

6. Eat your cake! You can serve it warm with vanilla bean ice cream and drizzle with caramel sauce for an especially decadent treat.

This is a rich, sweet caramel sauce that can be made quickly and is great not just on this apple cake, but on bread pudding, gingerbread, pie, baked apples, ice cream, and anything else you want to put it on. Or just dip raw apple slices right into it and eat! No baking of anything is even necessary to enjoy this delicious sauce, so it’s a great anytime treat.

1. Bring brown sugar, butter, and milk to a gentle boil and cook until thickened, 1 to 2 minutes.