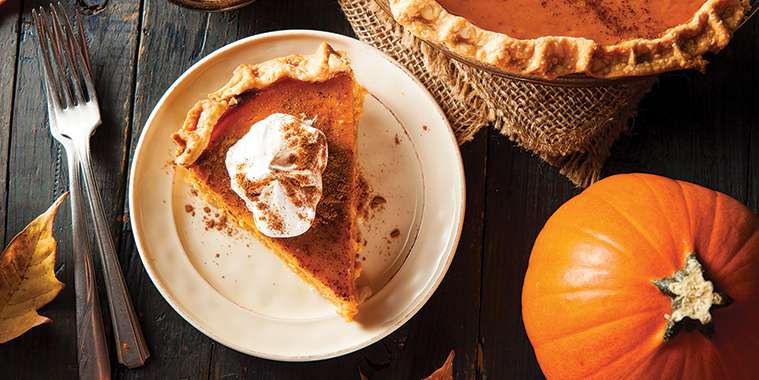 The humble yet versatile and festive pumpkin

Ah, the pumpkin. So bright! So festive, without even trying. Not only a perfect autumn decoration — pulling double-duty for both Thanksgiving and Halloween — but great eatin’, too! Soup? Bread? Pie? Latte? There isn’t anything the humble pumpkin can’t do! But what do we really know about the pumpkin?

A pumpkin is a cultivar of winter squash. It’s part of the cucurbit, or gourd, family (Cucurbitaceae) which includes melon, pumpkin, squash and cucumber. Native to North America (northeastern Mexico and the southern United States), pumpkins are one of the oldest domesticated plants, having been used as early as 7,500 to 5,000 BC!

China and India combined account for half of the world’s production of pumpkins. According to Statistics Canada, we produce about 80,000 metric tonnes of pumpkins annually — but we don’t even eat most of them. Instead, we carve them, use them as decoration, and then toss them out.

But we should be eating them! With nearly 3 g of fiber in one cup of cooked, fresh pumpkin, and more than 7 g in canned pumpkin, adding pumpkin to a daily diet can help a person increase their fiber intake. That 1 cup also has 1.8 grams of protein and 12 g of carbohydrates.

Similar to carrots, pumpkins contain high levels of Beta Carotene. In the body, beta-carotene converts into vitamin A (retinol) which is great for good vision and eye health, a strong immune system, and for healthy skin and mucous membranes. However, if you eat too much of it your skin can start to turn a bit orange. I know that sounds crazy but, in fact, its true.

All pumpkins, squashes and gourds are edible except wild-growing varieties. However, pumpkins can sometimes cause a condition called toxic squash syndrome (yes, I giggled, too) or cucurbit poisoning. All gourds contain Cucurbitacin E that protects them from insects, but it can be toxic in high concentrations. The increase of Cucurbitacin E may be caused by factors like weather conditions, and it can result in fruits tasting bitter.

Rule of thumb — if it tastes bitter, don’t eat it!

A pumpkin, from a botanist’s perspective, is a fruit because it’s a product of the seed-bearing structure of flowering plants rather than the plant itself. Because pumpkins are less sweet and more savory from a culinary perspective, we tend to categorize them as a vegetable.

Be sure to leave at least several inches (7.5 to 12.5 cm) of stem attached to the pumpkin when you harvest it, even if you don’t intend to use it as a jack-o-lantern at Halloween. This will slow down the rotting of the pumpkin. Disinfect the pumpkin after you harvest it by wiping it down with a 10 percent bleach solution. This kills any organisms on the skin that could cause it to rot prematurely. If you plan on eating the pumpkin, the bleach solution will safely evaporate in a few hours and be safe to eat. Store out of direct sunlight.

Commercially canned pumpkin purée and pumpkin pie fillings are usually made from different kinds of winter squash than the ones used for jack-o’-lanterns. If you’re like me, harvesting and preparing a pumpkin from scratch is just too much work. There’s no shame in using canned pumpkin in recipes. Here’s a classic recipe from edsmith.com for a super-easy pumpkin pie using their canned filling.

4. Pour filling into pie shell. Whisk together egg and water — brush the egg wash onto the crust.

7. Garnish with whipped cream and a light dusting of cinnamon or nutmeg to serve.

Whatever you’re doing this weekend, remember to stay safe. Gather in group sizes in accordance with the latest health regulations, and respect your friends and family by staying home if you’re feeling unwell.

We have a lot to be thankful for this Thanksgiving. Have a wonderful holiday!