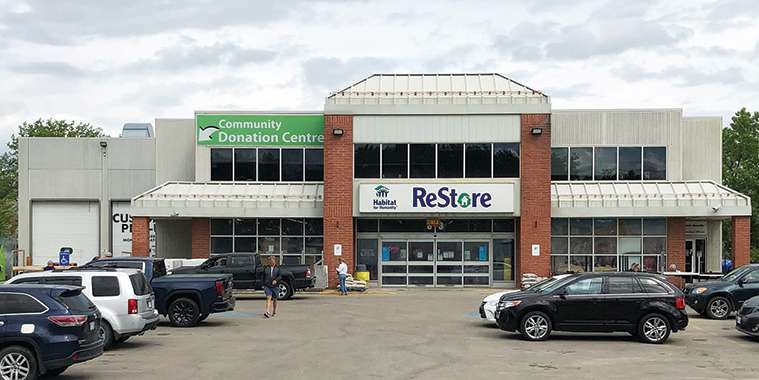 The ReStore, one of the most successful social enterprises in the world, was invented right here in Winnipeg!

Thirty years ago, in the spring of 1991, two volunteers working on behalf of Habitat for Humanity Winnipeg were renovating an old house, removing interior doors with many small panes of glass and crystal doorknobs, wide solid wood baseboards and other features from the house. The items were still in good shape but did not fit with the new design. Reluctant to throw these pieces in the dumpster, they asked the newly appointed Executive Director (and at that time Habitat’s sole employee) John Krahn if he had any suggestions what might be done with the materials. John had a fabulous idea!

An early adopter of the three R’s mantra — reduce, reuse and recycle — John was certain there was not just a use for these kinds of products, but that there was a market for them. John approached Art DeFehr, President of Palliser Furniture, the largest furniture manufacturer in Canada and a great supporter of Habitat, to see if he might provide space for Habitat to set up a small shop to sell previously used home renovation products. Art offered an area in one of their warehouses and
ReStore was born.

It was clear early on that the idea was a winner. So much so, that Habitat soon hired Rick Penner to be the first ReStore Manager. Rick, a recent graduate from the University of Manitoba with a degree in environmental science, began drafting the initial ReStore business plan. The ReStore quickly grew out of the original space and moved to a larger building on the Palliser grounds the next year. Eventually, Habitat realized they needed a more permanent space and purchased a building at 75 Archibald Street in 1993, which provided office space for staff and volunteers with approximately 5,000 square feet of retail space.

In 2003, Habitat purchased the property across the street at 60 Archibald Street. The old building was demolished and the new 20,000 square foot purpose-designed structure was erected. In May 2004, the building opened, with offices above the retail area. In 2014, we opened a store at the corner of Ellice and Wall. In 2015, we opened a store in Brandon and in 2018 we opened the third Winnipeg store at 1565 Inkster Avenue.

Meanwhile, outside Manitoba, the ReStore social enterprise grew like wildfire. The second store opened in Austin, Texas, and soon stores opened in many locations across the USA and Canada. There are currently 109 stores in Canada and more than a thousand in the United States. Stores have opened in England, Ireland, Continental Europe, Australia and New Zealand. For many years, ReStore has been the largest single source of cash for Habitat for Humanity globally. And, all resulting from the conscious effort of a few dedicated people committed to helping people and improving the environment. There is no better metaphor for Habitat for Humanity.

ReStore gladly accepts donations of new and used products typically associated with home renovation and home décor, items used in and around the house. Over the years, however, we have received and sold donations that fall well outside those parameters. We have sold mannequins, a dentist’s chair, twenty-foot tall fake palm trees and a stretch limousine! So, if you have something you no longer want, no matter what it is, please call us before you toss it out.

The Winnipeg stores alone divert more than three million pounds of materials, annually, from landfill sites. Extrapolate that across the network in Canada and around the globe and the total amount of product being re-used is truly phenomenal.

We will be celebrating our 30th anniversary with sales opportunities during the spring and summer, so stay tuned to our website and social media pages. You can follow us on Facebook @HabitatforHumanityManitoba and Instagram @HabitatforHumanityMB. You can also visit us at www.habitat.mb.ca for more information.

Sandy Hopkins is the Chief Executive Officer of Habitat for Humanity Manitoba.