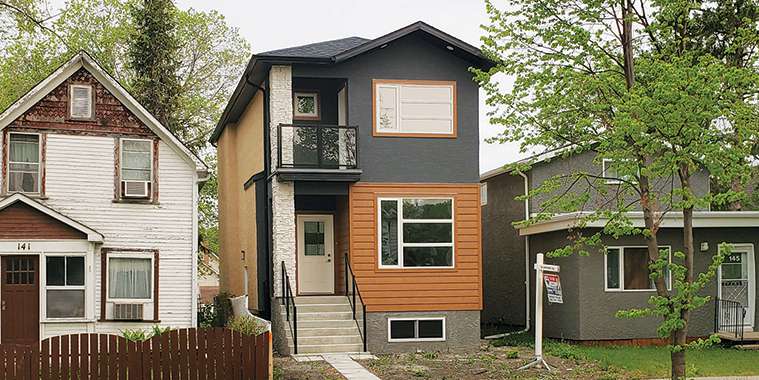 Given its forecasted population of between 861,000 and 930,000 by 2050, it is clear Winnipeg will continue to maintain its significant stature as the major population hub of the province, not just the metropolitan region. From reviewing the draft of Plan 20-50 put out recently by the Winnipeg Metropolitan Region (WMR) — the organization representing all 18 municipalities that include and surround the City of Winnipeg — there is a real emphasis and strategic focus on Winnipeg as the future growth centre of the entire region.

In fact, Plan 20-50 comes right out and says the “region will see the majority of growth within the city of Winnipeg”. It also says “increased density will be essential to meet the expectations for complete communities and investment in infrastructure.This will ensure efficient use of existing infrastructure, preservation of natural areas, and protection of drinking water and agricultural land by including requirements for municipalities to plan for more compact communities”.

Plan 20-50 supports intensification in built-up areas, including brownfields and vacant and underutilized sites, to capitalize on and optimize existing and future infrastructure and services.

Winnipeg Mayor Brian Bowman has been bullish on Winnipeg’s potential growth as he stated in August 2016 the city is projected to grow to 922,600 by 2040. He went on to say that our diversity as a community will continue to grow. And it is essential that as a community we continue to welcome new people to our city and recognize the strength they provide.

In this year’s State of the City address, Mayor Bowman cited Winnipeg growing to a million people and said the new Transit Master Plan is looking at modernizing public transportation for a city of one million people.

OurWinnipeg 2045’s companion document Complete Communities 2.0 — which is described as Winnipeg’s operations manual for how we will direct the physical growth and development of our city over the next number of years to meet these growth expectations — has recognized that Winnipeggers are supportive of maximizing existing infrastructure and services by accommodating more growth in existing communities through context-sensitive infill and mixed-use development.

The development community told the city planners that the City’s planning approach needs to recognize market desirability and eliminate barriers to density in both infill and greenfield areas to maintain affordability. Buyers in our current market, whether they are newcomers to our city or millennials, seek out modern homes which will offer them more energy-efficient and comfortable spaces that will allow them to work and learn from home if necessary.

Complete Communities 2.0 sets an intensification target of a 50/50 split for infill in the built-up part of the city, and new greenfield development in areas such as Waverley West and Sage Creek. This is seen as a reasonable target, but more work is necessary to ensure sufficient infrastructure capacity is in place to support this amount of development.

With specific respect to infill in the built up area of the city, the intention is to make it easier to build, more desirable and predictable. Based on current market sales activity in many of Winnipeg’s established and more recent communities, there is ample evidence
to show that demand for residential property has never been higher, and prices are increasing in the double digits.

So, if we accept the above premise that we are a growing city and will eventually reach a population of a million people, how are we going to achieve that level of growth sustainably while meeting the requisite number of new housing units?

One group that came together to do just that is the City of Winnipeg’s Infill Technical Advisory Committee. This Committee includes an excellent cross-section of Winnipeg’s housing profession experts to help weigh in on residential development infill guidelines for mature communities. This Committee certainly would have weighed in on infill to be encouraged and earmarked for the entire built-up city, if given the chance to do so.

In a letter addressed to Mayor Bowman and City Councillors, the Committee expressed their disappointment about not being consulted in regard to two late additional restrictions (not guidelines) to the final infill draft. The restrictions prevent subdivisions on properties backing onto gravel/dirt rear lanes as well as preventing duplexes and secondary suites from being developed on these sites, and limiting the pace of infill development to two sites per city block, per annum.

The Committee also pointed out concerns over discussions it had raised on reducing lot coverage, building heights and parking lot sizes for multi-unit developments being reduced from 35% to 25%.

Here is a concluding excerpt from their letter:

“We believe it is imperative that the City adopts a strategy to achieve higher densities in existing neighbourhoods and increase access to housing. Policies that allow for the addition of secondary suites as well as multi-family housing can provide both affordable home-ownership and more rental options.”

It appears we have a lack of commitment on how the City of Winnipeg intends to increase density to meet future growth that is sustainable — maximizing the inherent advantages of utilizing existing infrastructure (e.g. rapid transit corridor development) — while replacing housing long past its effective age. Ageing in place is not always an option as we saw happen in the West End in the ’90s — when housing in that area was on the cusp of irretrievable decline — before Housing Opportunity Partnership (HOP) stepped in with a plan.

If there is no political will to increase density in mature communities, we will see the continued decay of our older housing stock resulting in limited housing options for young families to choose from. They may instead decide to move outside the city.