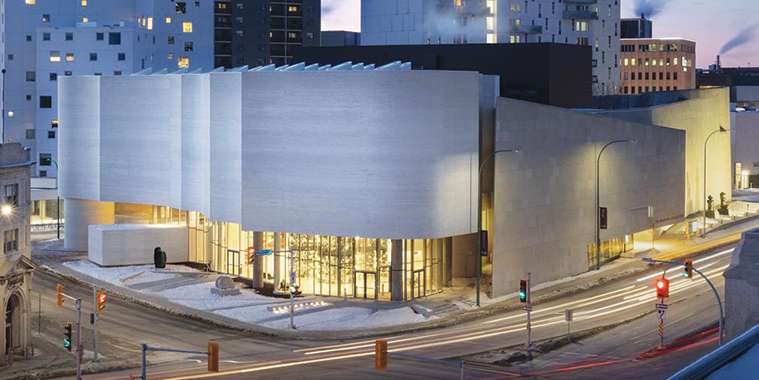 Qaumajuq, the WAG’s innovative new 185,000 sq. ft. Inuit Art Centre, is now open to the public. It is home to the world’s largest collection of contemporary Inuit art in the world, and is already being celebrated for its design and mandate.

Qaumajuq is the name that Indigenous language keepers gave to the Inuit art centre. Inspired by the light-filled spaces of the new building,Qaumajuq (pronounced KOW-ma-yourk) means “it is bright, it is lit” in Inuktitut. This has certainly been exemplified in its architecture, as light pours through skylights and floor-to-ceiling windows in every exhibit.

This was of course part of architect Michael Maltzan’s ethos when designing this brand-new $65-million centre.

The architect, who co-presented during a media sneak peak of Qaumajuq earlier this month, had been inspired by the “light, scale and vastness” of the Arctic landscape when designing this building, while also admitting being “mesmerized by the quality of light in Winnipeg” itself, which you can now see at play on the south side of the building where the scalloped exterior holds shadows and plays with the sunlight like ice on the tundra.

Maltzan’s other central task was to create an addition to Gustavo da Roza’s iconic 1971 façade of the Winnipeg Art Gallery that wouldn’t separate, but rather strengthen both buildings — which he has certainly achieved.

As the WAG’s director and CEO Stephen Borys made clear during the presentation, each floor of Qaumajuq connects directly and often runs right into the WAG’s own galleries, further emphasizing the interconnectivity of it all.

Qaumajuq’s exhibitions itself are connected via corridors with contours that roll like snow drifts, mimicking the land where this art was created.

From the street, Qaumajuq beckons. There is a continuous glass façade that runs the whole ground floor, allowing everyone to see its massive 3-storey glass vault where more than 5,000 carvings are now on display. In total, the WAG-
Qaumajuq holds in trust close to 14,000 pieces of Inuit art, including carvings, drawing, prints, textiles, and new media.

When you approach this vault in the building’s foyer, its flowing shape gets you so close to these sculptures; at some sections it even envelopes you within these works.

This ground floor also contains a theatre that will foster dialogue between the North and the South, a connection between cultures and a place of learning — bringing Inuit art to a larger audience by finding a respectful, celebratory way of presenting it here in Winnipeg.

Connecting the north to Winnipeg

The most touching part of this preview presentation was by Dr. Heather Igloliorte as she introduced the all-Inuit curatorial team of INUA, Qaumajuq’s inaugural exhibit.

This team consist of Igloliorte, along with Krista Ulujuk Zawadski (Curator of Inuit Art for the Government of Nunavut), and Asinnajaq and Kablusiak — both of whom are multidisciplinary artists. The latter three all presented works (dolls and an ivory carving) that were directly related to their family, dating back generations to great-great grandparents.

Their pieces lead up to the INUA exhibit proper, which can be found on the 8,000 sq. ft. third floor Inuit Gallery. This expansive space again pays homage to the scale of the land where most of these works were made, all illuminated by 20 giant skylights.

In this vast setting, visitors will encounter more than 100 works by 90 artists from all across the Arctic, from Greenland to Alaska, with everything from traditional carvings to a Seal Skin Spacesuit (by artist Jesse Tunjilik) on display. The exhibit also features a huge, near-three storey salon-style display of Inuit tapestries.

The top floor of Qaumajuq is dedicated to studio spaces, where artists, educators and students can work in a variety of mediums, including a studio solely dedicated to sculpture.

Altogether, there is nothing like Qaumajuq, which gives us the chance to view the world’s largest collection of contemporary Inuit art in a setting that truly celebrates its origins.

What International publications are saying

Qaumajuq has already been celebrated for its groundbreaking new mandate and striking design by the likes of Forbes, Travel + Leisure, The Globe and Mail, Wallpaper*, AZURE and enRoute magazine.

Forbes describes it as, “an extraordinary new museum that is home to the largest public collection of contemporary Inuit art in the world” noting the “one-of-a-kind, space-sharing design” which constitutes a “185,000-square-foot (4.24 acres, the size of four football fields) cultural campus in the vibrant centre of downtown Winnipeg.”

AZURE, in an article celebrating the architecture titled “Michael Maltzan Unveils a New Centre for Inuit Art in Winnipeg” also points to the groundbreaking curatorial process at Qaumajuq. “As much as “INUA” is a landmark exhibition itself,” writes Evan Pavka for AZURE, referring to the inaugural exhibit, “the presentation is only the first in a series of projects in which the new centre will be foundational in supporting and elevating the ever-evolving work and ingenuity of contemporary Inuit artists.”

For enRoute, Bert Archer celebrates Qaumajuq’s mandate further: “The significance of Qaumajuq cannot be overstated … Up to this point, the WAG’s Inuit collection has been mostly aquired and curated by settlers … But with Qaumajuq this is changing, and with this change will come others,
including an increased awareness across the country that collections should be curated by people who share a cultural heritage with the art.”

Qaumajuq is now open to the public. The Gallery Shop is also now open for in-store shopping. For more information about the price of admission and hours of operation please visit wag.ca The next Canada Life Free Sunday@WAG is April 11.

— Article courtesy of Only in the Peg, Tourism Winnipeg’s cultural blog at www.tourismwinnipeg.com