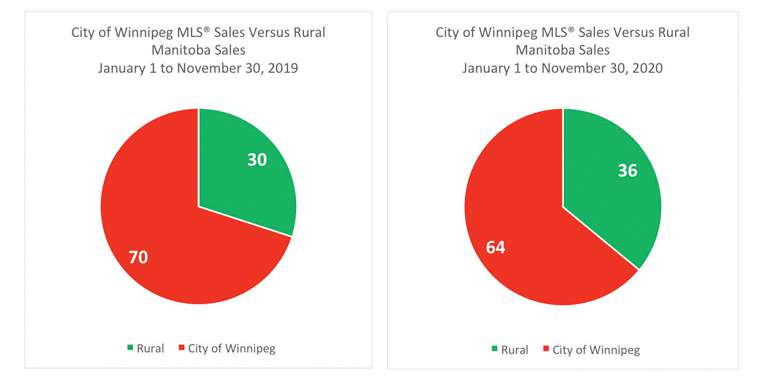 2020 in review: Real estate was one of the green shoots in a heavily impacted economy

As 2020 staggers to an end — which we should welcome given its heavy physical and emotional toll on everyone including the loss of life from the pandemic — real estate has been one of the few green shoots in the economy.

To start off with, prior to the pandemic taking hold in late March and resulting in massive economic shutdowns, sales were performing well with first quarter sales up 12%. It has to be one of WinnipegREALTORS® strongest first quarters on record. There was every reason to believe the spring market, which always begins in earnest in April with a large influx of new listings to get the year in gear, was looking promising.

Of course, this did not happen. As a result of the pandemic, listings in April were down 42% and 21% in May. Sales fell off, too, but not to the same extent. Even early on, buyers were more motivated than sellers,  and sales in April and May decreased 32% and 18% respectively.

June was considered a recovery month, with the economy opening up and the industry adapting to new public health orders and protocols — and adopting new practices (e.g. virtual open houses and digital signatures) — to keep everyone safe from Covid-19.  Buyers responded in record numbers as sales fell just shy of 1,900, easily surpassing the previous best monthly record for sales of 1,705 in May 2019.

As significant to seeing sales rebound so dramatically was the slow return to form in listings as they barely eked out a narrow increase over June 2019.

This pattern would continue and persist in the second half of 2020 with sales flying off the shelves and listings not able to restock them in time to satisfy many eager real estate shoppers.

WinnipegREALTORS® in concert with the Manitoba Real Estate Association (MREA) conducted a Probe Research survey in June that backed up strong buyer intentions to purchase a home in 2020 — with the vast majority saying they were undeterred by the pandemic.

Little did we know at the time how this v-shaped recovery would go well beyond catching up to the sales deficit created in first half of 2020 and absolutely vault past what the year-to-date MLS® numbers were for the same period of time in 2019.

With another record-shattering month for July — with a carbon copy of June sales just under 1,900 — year-to-date sales had not only caught up to 2019 but were now ahead by 5%. Not so for listings as reluctant sellers were far less inclined to put their home on the market, so listings dropped 10% in July compared to July 2019.

As a consequence, listing supply or current MLS® inventory — which was in a balanced state at the beginning of 2020 — was being diminished significantly.  Instead of 4.5 months at the beginning of the year, there were now only 3 months of supply available for sale in August and 2.3 months going into September, with a third consecutive month in August of over 1,800 sales.

More to review when the year is completed, but suffice to say that 2020 set a new annual record for sales in October at close to 14,000 and is well over 15,000 sales in December. In fact, December represents the seventh consecutive month of record-breaking monthly sales with a 38% increase for the December 1-15 period.

Listings entered on the MLS® up until the end of November are actually down 9% from the same period in 2019. This is a real divergence from the upward trajectory of sales compared to 2019, and the primary reason for double-digit average residential-detached sale price increases in the last few months.

So which are the leading MLS® areas within WinnipegREALTORS® market region that reaches down to the Morden/Winkler area of Manitoba and up north along both sides of Lake Winnipeg? Number one, as it has been for a number of years,  is the Steinbach MLS® area. It will approach close to 900 sales this year and no other MLS® area comes close to it in total numbers. Second most active is the Morden/Winkler MLS® area with 652 sales at the end of November.

In Winnipeg the busiest MLS® area — which could reach 600 by year end — is the Waverley West area in southwest Winnipeg. This large-scale newer development has really come into its own over the last few years with more recent communities like Prairie Pointe offering new lots to build on.

Rural as a whole really stood out in 2020 with a gain in total MLS® market share of 6%. Last year, the split between Winnipeg and rural MLS® areas was 70/30 but is now 64/36. We know a shortage of listings in highly sought after neighourhoods in Winnipeg have impeded the number of sales that could have transpired if not for more supply.An additional contributor to rural sales this year is the 70% increase in vacant land sales and 26% in resort property sales as of the end of November. Together they are well in excess of 900 sales. Vacant lands are predominantly located outside Winnipeg with a considerable number located in Manitoba resort areas.

This past year has been one like no other. And amidst the unprecedented challenges we’ve all faced — especially our frontline workers and those impacted so directly by Covid-19 — it does remind us how important it is to have a home that can be a true refuge from all that is happening around us.