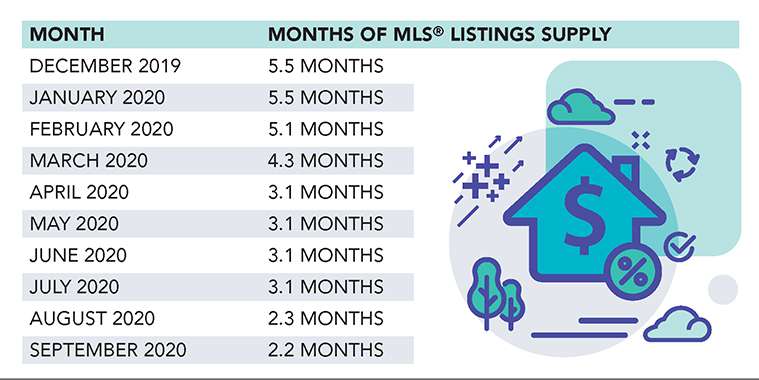 Just like the severity of the pandemic is unique in each region of Canada, so too are our housing markets.

Despite The Canadian Real Estate Association (CREA) saying that housing markets in Canada at the beginning of 2020 were in short supply of available listings to meet expected demand, the Winnipeg-
REALTORS® market region was actually in good shape. It was considered in balanced market territory with over five months of MLS® supply at the beginning of the year and right into March.

However, Covid-19 changed all that. As the economy ground to a stand-still in April, listings dropped off dramatically. Nearly half of the listings you would expect to see come onto the spring market did not materialize in what is normally the busiest time of the year. Sales also fell in April, but less so, at a decline of 32%.

May continued the downward trend, with listings declining 21%. Sales did not fare much better and were down 18%. As a result, the healthy listing inventory at the end of March was now down over 1,000 listings from 2019 going into June.

From here on in, listings entered on the MLS® market never did make up the deficit created in April and May. June shows what really has unfolded the rest of the year. Sales soared to just under 1,900 sales, nearly 200 more than the previous best month ever in May 2019, while listings barely held their own with the same number entered the year before. The gap therefore widens with close to a 1,400 listing difference (close to 6,000 in 2019 versus 4,600 in 2020) heading into July.

To make matters more challenging in terms of this growing disparity between listings not keeping up with demand, July ushered in another month of nearly 1,900 sales, while new listings entered on the market actually decreased 9% from July 2019. With listings again falling short of what came on the market in August the year before — and robust sales eclipsing 1,800 sales for the third month in a row in August — WinnipegREALTORS® market region had become in a short period of time what CREA described at the beginning of 2020. The five months of inventory to start 2020 was a thing of the past with inventory going into September sitting at just 2.2 months.

In its August market release, CREA indicated there were just 2.6 months of inventory on a national basis at the end of August 2020, with a number of markets in Ontario with mere weeks of inventory. So as much as CREA may have anticipated fierce competition for a shortage of listings in a number of Canadian housing markets going into 2020, WinnipegREALTORS® did not see itself in a similar circumstance. But that doesn’t matter now. The WinnipegREALTORS® market region has joined many others across the country with demand outstripping supply and very high sales to new listing ratios as a result.

This measure is another indicator of demand overwhelming supply when you get into listing shortages. In September, when CREA reported having one of its highest sales-to-new-listings ratios ever in August of 69% (72%  in July), Winnipeg’s was 78%. Fast forward to September and the trend continues. Another 78% sale-to-new-listings ratio resulted. Helping make this happen were sales up 47% over September 2019 while listings were down 3%.

To the surprise of no one, with all the multiple offers and above list price sales occurring, the average single family home sales price was up 12% for August and 11% for September.

Clearly, while there is reluctance on the part of a number of potential sellers to put their home on the market during the pandemic, the confidence of buyers to engage in the market — motivated by the dream of homeownership — has never been higher.

The continuing affordability of housing in our local market has been a contributing factor to this year’s record-breaking sales increases.

RBC Economic’s latest Housing Affordability Aggregate Measure shows Winnipeg is below its long-run average by 2.3 percentage points at 28.4%. This is the percentage of median pre-tax household income you require to service the cost of mortgage payments (principal and interest), property taxes and utilities based on the average market price of single-family detached homes and condo apartments.

In the end, though, Covid-19 has been the real game-changer this year with CREA’s senior economist Shaun Cathcart explaining it well in the September national market release.

“I think another wildcard factor to consider, which has no historical precedent, is the value of one’s home during this time.” Cathcart said. “Home has been our workplace, our kids’ schools, the gym, the park and more. Personal space is more important than ever.”