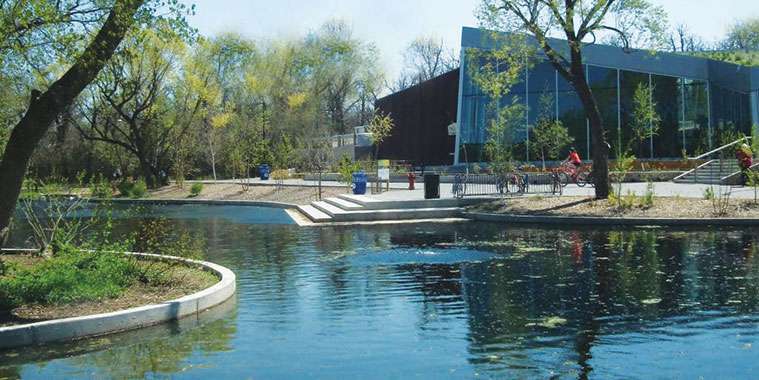 Tuxedo’s history is unique. It began when the land where it sits today was purchased by a group of businessmen between 1903 and 1910 in order to create a planned “exclusive residential-only suburban enclave” known as Tuxedo Park. It was named Tuxedo after a New York City Suburb and was incorporated by the Manitoba Legislature in 1913. Tuxedo was amalgamated into the City of Winnipeg on January 1, 1972.

The footbridge that runs from Assiniboine Park across the river once had only seasonal access.

Any organized picnics, play or recreation used to be prohibited in Assiniboine Park due to the Lord’s Day Act. Officials even went so far as to disable the merry-go-round and remove the ropes from playground swings every Saturday evening—talk about the fun police!

Retail locations were prohibited in Tuxedo until the 1960s when rules were eased to allow a small shopping mall and apartment complex, with liquor sales following suit in 1969.

The Assiniboine Forest was originally part of the Tuxedo Park development plans, but the stock market crash of 1929, and resulting depression, halted these plans. The area was never developed and has been used for hiking and recreation ever since. It’s also one of the last urban nature parks of its kind in Canada.

Tuxedo is the most upscale neighbourhood in Winnipeg and you’ll immediately notice the relaxed, quiet  atmosphere due to the suburb’s low traffic volume. It’s also a very walkable area, studded with a wide range of tree species.

Greenspaces and parks are peppered throughout the neighbourhood for easy access, with Assiniboine Park and Forest bordering on the west. Commuters enjoy an easy drive to work and can get downtown in about 20-30 minutes during rush hour. Public transit stops are infrequent though, so carpooling is definitely recommended if you wish to reduce your carbon footprint.

According to REALTOR.ca, 85% of the population own their homes, and a large majority of houses were built during the 60s and 70s, with most being single-family homes with 3-plus bedrooms. According to Statistics Canada, there are 2,739 dwellings across Tuxedo, including Old and South Tuxedo, with household incomes of more than $100,000 for 61% of the area. Tuxedo has a relatively small housing market with fluctuating listings comprised of condo apartments and single-family homes. Prices can average about $170,000 for a condo, and $600,000 for a 4-bedroom single-family home.

Even though businesses have been allowed to operate in Tuxedo since the ‘60s, there are only a few shopping and dining destinations within the community, but you’ll find big-box stores at the south end of South Tuxedo — plus many boutiques, shops and restaurants in neighbouring areas, like River Heights.

If you’re looking to whet your appetite within the community boundaries, then Tuxedo Village Restaurant on Corydon is an excellent option for traditional Greek cuisine. Stella’s on Grant is another mainstay, focusing its menu around fresh breads, soups, jams and sandwiches—all made in-house.

If you’re interested in the comedic arts, then Rumor’s on Corydon is the place to go for your fill of stand-up. Theatre lovers will be delighted by performances at the Winnipeg Jewish Theatre, while The Lyric Theatre at Assiniboine Park offers a wide range of seasonal performances and live music.

Got a soft spot for jazz? Check out Izzy Asper Jazz Performances for some swingin’ live music.

Assiniboine Park and The Pavilion is jam-packed with attractions like Art in the Park, beautiful gardens, and even a steam train! It’s open year-round, so you’ll never run out of things to see and do there. You can even book The Pavillion for your dream wedding or milestone celebration!

You can’t visit Assiniboine Park without a trip to the Assiniboine Park Zoo, and Assiniboine Forest which features a network of scenic trails and multi-use pathways. The zoo doubles as a nature conservancy and research centre which partners with international organizations to preserve wild animal species, their habitats and resources.

If you’re a golfer, then you’ll be thrilled to know that the Tuxedo Golf Course is the closest place for a quick round and is practically walking distance from anywhere within the community.

Tuxedo promises a relaxing respite from the usual city-central suburban neighbourhood, with quiet streets, ample green spaces and plenty of opportunities for recreation and entertainment.

If you’re looking for more family-friendly places in Winnipeg, a REALTOR® can always help you get to know the local hotspots, and find the right home for you and your family.